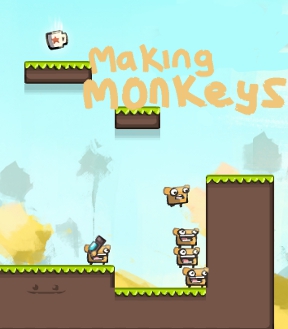 If you've played Greg Sergeant's charmingly quirky Use Boxmen, then you'll find his new game Making Monkeys quirkily charming, although it scratches a slightly different puzzle platforming itch. Guide a monkey towards a sweet cup of star-marked caffeine goodness, with a little help from your cloning gun. After all, where one monkey can't succeed against deadly pits, towering cliffs, and other obstacles, he can get by with the help of his friends... or at least their bodies!

After a few introductory levels that test your ability to use the [WASD] keys to move and jump, the game provides the cloning gun, which you can pick up or throw with [spacebar] like a good little monkey. With a simple click of the mouse, you can aim and fire a clone of your toast-shaped simian self. You only have so many clones in a level, as indicated by the number in the upper left, so think carefully before you shoot. All your cloned pals move at the same time in the same direction you do, so you'll need to think before you start spamming the screen with monkeys if you want to get that sweet cuppa joe. If you get stuck, just hit [R] to reload.

If you like out-of-the-box lateral thinking for your puzzle solutions and still want your platforming skills challenged, Making Monkeys will check off both those boxes and then wrap it up in one cute little package. Some of the levels seem impossible at first glance until you reexamine your assumptions, so don't be afraid to experiment. (You know what they say about 1000 monkeys blasting away with 1000 clone guns, right?) The game's biggest drawback is its short length: only 11 true levels, plus the initial 3 tutorial levels and a bonus "level" at the end which is essentially an invitation to crash your Flash player and/or browser. In a game that has so much wit and charm in its design and presentation, it's a shame to see it end so quickly. Still, it works well as a coffee break game. Maybe served alongside some monkey-shaped toast and a banana.

Only WASD? Why no arrow control? Are all monkeys left-handed?

This was really good up until near the end... the controls got the better of me! It's WASD only, with no option to change to arrow controls. Since I use my mouse left-handed, it makes it very tricky to co-ordinate all the running, shooting and throwing! So I had to quit, as my hands don't quite bend in the required way. Overall though, very cute, nice sense of humour and just puzzling enough to keep you going!

Developer of the game here:

Sorry about only WASD, i tried to implement arrow keys before release but it created a number of bugs, and i needed to release the game on time. I will be patching the game on ArmorGames+my website as soon as i get it sorted! Thanks for the review JIG :)

[Thanks for the note about the coming update. Will upload the update here at JIG as soon as it's available. -Jay]

Oh man, that was awesome. The negative-space level was a bit out of place, but it was a pretty awesome level and I enjoyed it the most.

Cute game, and fun. My solution to the last regular level was VERY different from the one in the walkthrough - much easier in fact.

How rare to see something original and really fun! deserves a more serious development, in my opinion :)

I tried to solve level 12 the hardest way possible and almost did it. The idea was to shoot a monkey and immediately throw the gun, make the new monkey grab the gun in mid air and repeat the process until the other side. Didn't work, but I liked the idea :P

By the way, "more serious development" is not to be taken offensively! I mean the same kind of 'seriousness upgrade' meat boy gained with super meat boy :P (i.e. money)

Fun little game. Not too challenging, and the physics didn't make it unplayable. BTW, I managed to do level 12 with throwing the gun twice, after that it was monkeys jumping on monkeys.

what's with the clouds?

Arrow keys is currently an option on the front screen (can toggle controls on the menu).

Great game but it's only 8am here so will finish it later.