Mark of the Ninja

This might come as a surprise, but there's a lot of discrimination in the ninja industry, or the "ninjustry" as those of us in the 'biz call it. If you're not a mutant turtle from New York chances are you're going to have a little trouble finding work. Sure, every so often you see a rising star from Beverly Hills or something like that, but for the most part in this job it's go sewer or go home. Thankfully for those of us who aren't reptiles, there's Mark of the Ninja, a stealth action game developed by Klei Entertainment that provides ninja excitement without the heavy shell or outdated surfer lingo. As an unnamed ninja, you'll use your weapons, skills and the powers of a mysterious tattoo to seek revenge for an attack on your clan. 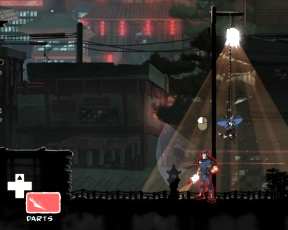 Control your ninja with the [WASD] keys to move and the mouse to aim your weapons, using other keys for the various ninja actions you'll need like taking cover and hiding bodies. You can also use a gamepad, and in this case it's really the more comfortable choice. You have a wide variety of techniques available, but it's important to remember that you're a classical ninja and not one of those teenage mutant varieties: your goal is stealth, not combat. While you're fairly powerful in battle and can take one or two enemies head on, more than that will likely defeat you. Even if they don't, you'll receive fewer points for dealing with situations in such a crude fashion.

This is probably the most significant way that Mark of the Ninja deviates from the average stealth game. While in most games you're encouraged to kill your way out of situations when stealth fails, here killing is, at best, a last resort. You're encouraged to deal with enemies non-lethally or, failing that, with a measure of humanity. Proper stealth kills are quick, ending the enemy's life efficiently and silently. If you botch the stealth kill command or just slaughter enemies in direct combat, your ninja fails to manage this, leading to noise and a greatly reduced score. This is a stealth game where stealth is the goal rather than a tool to reach a goal. You have a few advantages to make this easier - you can "see" sound, represented as blue waves that emit from noisy objects and actions, and you can easily tell when your ninja is hidden from sight by his silhouette. 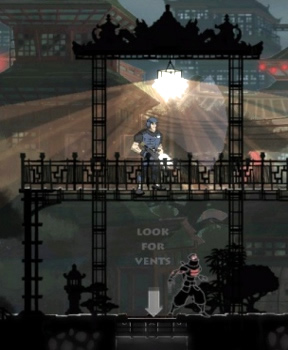 Analysis: This paradigm shift toward stealth as both the means and end is what defines Mark of the Ninja and makes it a great game. You'll come to view situations in a different way: a foolish guard who's not really paying attention to the area is an easy obstacle to creep past, not a free stealth kill, for example. A room full of alert guards focused on the doors would be a difficult battle in many other games, but here it's possible to take advantage of their focus and completely bypass the room by sneaking along the ceiling instead. These aren't just options available to the player; they're actually the ideal options, as you receive more points and a better ranking after each stage by using nonlethal, stealthy solutions. Later on, the levels become more complex and nonlethal play becomes more difficult, but at that point it feels much more rewarding when you manage to get through a stage without killing anyone.

On the other hand, choosing to ignore this and go wild is great fun as well. One fantastic way of dealing with guards is to take out one of their buddies and simply drop his corpse right in front of one of them from a high vantage point. They'll absolutely freak out, making it easy to cause more carnage or sneak by. It's also possible to just straight up kung-fu guards down for an easy finisher with your sword. To further aid you, you have a variety of ninja tools that can be used for both stealthy and non-stealthy purposes like throwing darts and noisemakers. These help keep the action fresh and offer even more options to the player. There are also upgrades purchased between levels that can enhance your stealth and melee capabilities along with your ninja tools.

All this is tied together though a gorgeous animated art style. Mark of the Ninja resembles a cartoon, lightening the subject matter a bit and adding a little flair to the proceedings. The game's story is also presented through animated cutscenes. The music and sound effects are perfect for the subject matter as well, adding tension rather than defusing it. You'd quickly learn to recognize which noises attract guards even if you didn't have the ability to see that effect for yourself.

The precision that Mark of the Ninja offers makes it a fascinating experience. There's very little chance of a plan going wrong because of pure chance or lack of information; here, you're given everything you need to ninja your way through situations and if you fail, it's clear it was your own doing. This also makes it easier to improve in the future, eventually allowing you to turn each level into a perfectly tweaked operation where you sneak through flawlessly...or slaughter the opposition untouched. It's a very rewarding game with plenty of replayability. Ask yourself: can those turtles offer that?

Windows:
Get the full version (via Steam)

I'm a bit disappointed that you reviewed this game only now. It deserves to be more known, as it is one of the greatest stealth games ever made, and it's been out for quite some time now.

I also don't agree with you when you say that it plays better with a gamepad ; I tried both, and they manage to make the game different if you play with one or the other ! To me, one has to try both before he can decide which one is better, but there's no clear superiority here.

All of this aside, it is a great review, and I am really delighted to finally see Mark of the Ninja on JIG. :)

Actually...isn't this a repeat? I could have sworn I remember seeing this game up here already, and as usual being annoyed at shilling for commercial games (this is on Steam, IIRC) rather than listing flash games and the like.

Hi vulpisfoxfire. :) A quick search of the site reveals that we have never covered the game before. As for "shilling for commercial games", you can see our schedule on the side of the page that states we feature browser games all throughout the week (I usually post 2-3 daily during the week and one per day on the weekend), and "commercial" games are only on the weekend. You can use the tabs at the top of the page to set it to only see browser games, if that's what you prefer.

To be frank, as we've always been dedicated to showcasing the best browser AND download releases around, we are just as interested in drawing your attention to the games that we feel deserve it whether they're free or paid. I can promise you that every game that we feature is here because we felt it SHOULD be, and I rather think we have more than enough content of both varieties to appeal to all players. :)

To "shill" means to promote something out of self-interest or ulterior motive, Vulpis. Do you have any particular evidence that is what is going on here rather than simply promoting a game the site reviewers think is good?

And it is quite good, by the way. I actually am not a fan of stealth games for the most part because they tend to devolve into fiddly repetition, redoing the same tiny segment over and over and over until you get it right, with each inevitable failure leaving you to stand there shamefully letting your enemies dispatch you so you can try again (or doing a checkpoint load if the option is available). And this actually doesn't fix that problem. So why do I like it? Because everything else about it is so graceful and fluid and fun that it offsets that. It makes you feel clever and deft and slick to weave your way through in the graceful, quick way this game makes quite intuitive, and those repeated failures end up easily forgotten when in the next area it's not too hard to pull things off in a very slick and deft manner. Really, it doesn't fix my problems with stealth games so much as emphasize and exult most of what is fun about them, and that's why I like it despite not really being a fan of the genre.