Matchstick Memories is a curious text adventure-esque game by CH Buckingham where you gather fragments of memories while wandering around a strange and forgotten land. However, instead of typing "N" to go north, you've got to reassemble the proper fragments to perform actions in your search for elusive matches and matchboxes. The combination of an intriguing (if ambiguous) story and samegame and other puzzle elements makes for some surprisingly compelling and tactile gameplay. 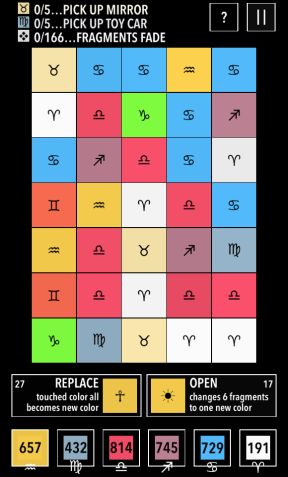 Each "memory" is a grid of colored fragments, which can be manipulated in different ways to collect them. For example, in levels where you're dealing with "memories of threads," you can clear away groups of similar tiles by drawing a path connecting three or more tiles together. When you have a "memory of clusters," you swap adjacent symbols until a cluster of three or more touch, after which they disappear. The moves you make are tallied in the top-left corner, where completing certain objectives will move you to the next memory, be it good or bad. In most memory types, a group of three will clear away, but add nothing to your scores; groups of four or larger will net an increasing number of points toward goals. As you explore each chapter and discover matchboxes, the fragments that you collect will also be added to the matchboxes at the bottom of the screen. During most memories, you can pay fragments to influence the board in different ways, such as changing tiles to different colors, or making groups require more or less tiles to clear.

Navigating around a chapter usually takes the completion of smaller fragment goals, while more specific goals such as collecting inventory items require larger targets. This is usually a comfortable challenge, though having to play through cycles of memories you've already completed just to backtrack your path can become tedious (it doesn't hurt to make a map on paper just in case). Audibly, the game is lacking (chimes and random orchestra notes do not a pleasant soundtrack make), but the simple tile-based graphics are unexpectedly eye-catching, as memories take on different color palettes and visual effects to reflect the different atmospheres you travel through.

While there's a lot to take in at first, both in terms of gameplay style and the tasks you're trying to accomplish and the ambiguous plot points that connect them, once you settle into Matchstick Memories, it's hard to put it down. In just the same way that finding one item gives you the nugget of an idea to try it elsewhere in a traditional text adventure or room escape game, discovering one part of a chapter can lead to a chain reaction of dashing (and swiping about), with extra elements of intrigue thrown in courtesy of timed and limited-move rooms. If you give Matchstick Memories a try; you'll be impressed with what sparks will fly.

-
a glowing synopsis, but even more
impressive is the image, showing
hours of progress. though sounds
and re-traversing will haunt me
...

I'm very tempted to get this game, but at the moment I have plenty of unfinished homework and upcoming midterms; it would probably be a bad idea to sabotage my free time that way.

Looks very interesting, but it's iOS only. When will developers start making games available for both iOS and Android by default?

I really enjoyed this one. I love me some good adventures, and the combination of interesting writing plus a novel gameplay mechanic or 3 was pretty great.

There are a couple nitpicks to be made, though. Like the review points out the audio could use some work, and I found the writing to be a little too-too. But for the price I'm not complaining too much.

v1.12 has been released to the AppStore. If you're running iOS8, please update to the latest version. Thanks!