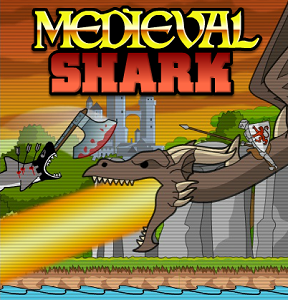 He's munched his way through Miami, Sydney, and New York, but now everyone's favorite selachii is ready to get a little medieval! It seems that Ye Olde Sharke has managed to find Ye Olde Tyme Machyne, and has transported himself to a feeding frenzy that only the middle ages could possibly provide. Mausland Entertainment presents: Medieval Shark, a fast-paced action game starring a creature hungry for much more than those turkey legs at the county Renn Faire.

Used the [arrow] keys to move your shark around, launching in and out of the water to cause massive dark age carnage. A super jump, for extra height, can be made by diving to the bottom of the waterway, then quickly swimming up to the surface. Cause extra destruction by (somehow) swinging your battle axe with [A]. Cause enough mayhem to fill your Frenzy Bar, and you'll enter a rampage of super-effective weapon damage. Various special creatures and crafts will attempt to challenge your ocean supremacy. Deplete their health bar or mash the designated button to fend them off. Treasure chests placed at the bottom of the ocean will reward you with points, power-ups, and new weapons. As always, Mausland's stylistic mesh of arcade excitement, Japanese game show-like inscrutability, and feverish-dream subject matter makes for one heck of a hyper-kinetic ride. Undeniably, Medieval Shark is a game that puts a ton of flash in front of only moderate substance. But when that flash comes from castles, viking ships, and harpies blowing up all over the dang place, it's hard not to give it a nibble

Why is the game rated "S"? Did I miss something? The sheer amount of craziness going on is just hilarious.

Well, going by our standards, there is some blood. You know. Just some.

(Okay, a lot. But it's so cartoonish, I felt it didn't deserve the ol' rating-r.)