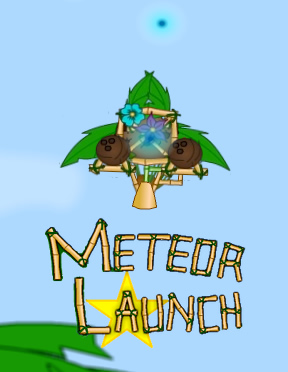 You've probably encountered launch games before, the sort of games where you propel some object or critter (like a hedgehog or a penguin, or even a person) for length and/or height. Shooting for distance is fun, but while there are many, many such games on the wild wild web, we here at Jay is Games do not often feature them. There are so many that it takes something special to stand out. Meteor Launch, wherein you play a Polynesian boy trying to send a sad-looking fallen star back home into space, is special, and stands out from many similar games.

Everything in the game is controlled with the mouse. Launching the meteor is done with but a click, ideally when your launcher is at its most extended for maximum thrust. You can control the path of the meteor with the mouse as well. At first, your launcher is wholly inadequate to send your space rock out of orbit, but you can purchase upgrades from a sort of masked Tahitian Edison, who will gladly sell you all sorts of sophisticated aerospace technology to aid in your mission, in exchange for glowing blue fireflies. This peculiar currency can be acquired by your meteor in flight, and the boy will also collect fireflies at night between launches. Launch, fly, avoid obstacles, and purchase upgrades, all to send your wayward extraterrestrial rock homebound.

Two things that make Meteor Launch unique among launch games: One, unlike many such games, where your launched object follows a random, Plinko-like path, Meteor Launch puts you in control. You control the direction of the meteor, and you control when to activate power-ups. It's a refreshing counter to the trend of littering launch screens with boosts and obstacles, so that you feel like the game is playing itself. Two, the story is quite charming. You might think that a tale of a Micronesian NASA would come across as goofy (Coconuts for fuel tanks! Palm fronds for aerodynamic fins!), but the concern the boy shows for his lost rock is sweet and affecting. I dare you not to smile when you finally send that fallen star back home to the sky.

It's short, not to difficult, and not a radical departure from the launch game genre, which is fine. I was occasionally frustrated when it seemed I was going too fast to anticipate oncoming obstacles, though that might have been a consequence of my lead-footed tendency to burn fuel until there was nothing left to burn. Some finesse might achieve better results. All in all, though, Meteor Launch is a cute, refreshing take on a familiar type of game.

Thanks for posting this as I'm not a huge fan of Launch games but I found this a simple and pleasant diversion and had fun playing it.

Despite the simple (and almost crude bordering on ugly) aesthetic, once I stuck with it there was enough under the bonnet (music, progression etc) to keep it going.

Sorry but for me it was YALG.

Nothing to see here, move along...

This almost doesn't deserve to be classified as a launch game... there's plenty of gameplay besides clicking the mouse button at the right time and waiting for the roll of the dice. I like it.

If you've got all the upgrades and you're still having trouble getting into orbit... (major spoiler follows)

the most important thing to realize is that holding down the "gas pedal" won't really get you there that much faster, and will leave you high and dry (literally) when you're about 90% of the way up. It's much more effective to use the engine in spurts (particularly when you get up into red and yellow firefly-land) and travel slowly enough to be able to avoid the red ones and hit the yellow ones. The yellow fireflies are the key to getting into orbit here.
In summary: Slow down and look at the scenery :)

I think that the birds just came too fast to be able to dodge them with normal reaction times, so it's just the luck of the draw on that in my case. I'm trying to get No Sweat, and it's just infuriating because it feels like I need to spend X fuel to get to yellow fireflies in the first place, Y fuel to help me get from yellow to yellow, and then I'm out of juice right at the point that the fireflies stop completely.

That's it, I've given up on No Sweat. If there was some mechanic to guarantee that I didn't get massive patches of air with no yellows at all, or some upgrade that let me see more than 5 meters in front of my face, then I'd be able to do it. I just can't.

In comparison, I managed to get Fast Ride with very little effort.

I could sure use a build strategy for Fast Ride, if anyone has one.

Go figure. Right after posting that I got it on my next try. Main thing was to avoid birds and so be more efficient.

Jon: It seems to me that if you hug the left or right edge, birds are less likely to hit you (or at least you only get hit by birds traveling in one direction :oP
I agree with those who say that you can't see far enough ahead, though.

The major problem with No Sweat is not the difficulty of getting yellow fireflies, but rather the difficulty of avoiding red ones. Each one you hit not only significantly drops your speed, but you also loose upgrades such as aerodynamics. If you can keep your aerodynamics up, it's much easier getting to the top with fuel to spare.

Are Red Fireflies attracted with Decoy Flowers because I'm giing slowly and suddenley theres 5 around me. it's impossible to steer.