Midnight Mysteries:
Devil on the Mississippi

The Ghost Busters must be pretty mad at you, since these days when there's something strange in the neighbourhood, it seems like you are the one who always the one who gets the call, whether you want it or not. After helping the unquiet souls of Edgar Allen Poe and Nathaniel Hawthorne, you probably thought you deserved a little R'n'R. Unfortunately, you don't get to rest on your laurels for long before undead Mark Twain shows up. But don't worry, he doesn't want to eat your brains, he just wants you to give him a helping hand in Midnight Mysteries: Devil on the Mississippi, the third installment in everyone's favourite hidden-object adventure series from Mumbo Jumbo about dead writers harassing you to do incredibly dangerous tasks. 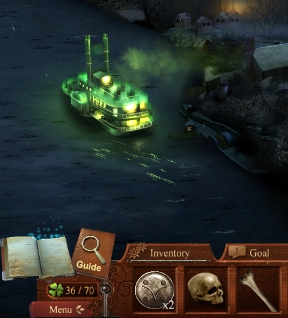 It seems ol' Mark Twain (real name Samuel Clemens) not only had a knack for spinning a good tale... he may also have had certain unique cognitive abilities. In his youth he worked on a riverboat, shooting for his boat pilot's license, and one fateful evening had a premonition that would haunt him for the rest of his life. Of course, now that his life is actually over, he can't remember what it was. Now you're stuck in the past on a riverboat with a host of ghostly travel companions... and something very dark and very unfriendly who graduated with a Masters in "makin' things go all freaky and whatnot while big mean things flash by the windows". Even once you get off the steamer, things don't start getting any easier for you, and as you travel around the world (and back in history) you just might end up solving a mystery that stretches back to a conspiracy hundreds of years old. Just make sure you strap on your boots so the jump scares don't spook them right off of you.

Devil on the Mississippi doesn't have any alternate modes of difficulty, and the game offers a lot of little visual nudges in the right direction; items you can pick up give off faint little green glowies, places you can use an item you're carrying give off little blue-white glowies when you mouse over them with the object in hand, and while your skeleton cursor unfortunately doesn't have any glowies of its own, it will change to indicate whenever you're over an area transition or place you can interact with. Keep your eyes peeled for four-leaf-clovers, which will unlock a special play mode, and ravens, which are much more important to you at the present time because they're needed to get hints. Click on the raven sitting atop the lantern in the bottom-left corner during regular gameplay and you'll be pointed towards the next step in your current objective, or you can use a hint during a hidden-object scene to find the item of your choice. Don't use a hint right away, however, since just clicking on an item name in your list will cause the corresponding silhouette to appear in the lantern, and might just give you the clue you need to track it down. 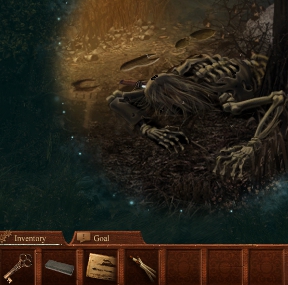 Analysis: At this point, if you're at all familiar with their work, when you hear a game is made by Mumbo Jumbo you probably expect it to be well done, and they definitely don't disappoint here. Beautiful artwork, highly detailed and animated environments, not to mention a fantastic use of atmospheric sound for most of the soundtrack, makes Devil on the Mississippi one of the most highly polished games in the genre. While you might spend the first half of the game more than a little confused as to what's going on and how all the clues and scenes are supposed to tie together, the story actually does a surprisingly good job of doing just that, even if there are times it feels like the game is trying a bit too hard to stealth-educate you about Mark Twain's career and a certain other literary giant. 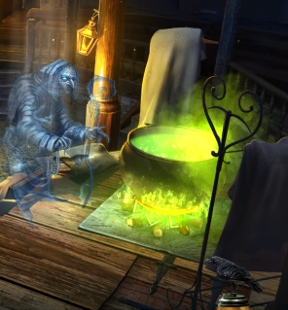 Compared to its predecessors, however, the third installment in the Midnight Mysteries series doesn't feel like its quite as tightly designed. There are more mildly irritating fetch quests from characters who feel like they only exist to derail you from the main plot long enough to pad the gameplay a little more, and some of the puzzles are, frankly, a little boring and downright repetitive; one don't-touch-the-walls maze game is repeated four times in a row. Of course, that's not to say it's bad, since I wouldn't be sitting here with you recommending it if it was. Devil on the Mississippi is, in fact, good. Not perfect, but very good nonetheless. The puzzles that are more complicated than the rest are refreshingly challenging because the game doesn't hold your hand, and while the story can be a little hard to follow at first due to a heavy reliance on communicating with the player through found clues, it's actually the sort of grand-scale historical mystery George and Nico probably would have been great at solving.

The game is fairly lengthy at around four-five hours depending on your playstyle, and for once the extras the Collector's Edition come packed with actually feel like welcome bonuses and not pieces the game needed to be coherent. There has clearly been a massive amount of love and effort put into Midnight Mysteries: Devil on the Mississippi, and the end result is a satisfyingly meaty adventure with a lot to see and do and a creative twist on alterna-history and edutainment. It's another creepy, gorgeous romp that will send you travelling through important points in history. In the end, after so many dangerous encounters, otherworldly beasts, and uncontrolled time-travel, I just have one question remaining... when do I get my sonic screwdriver?!

A Collector's Edition of this game is also available. It contains a bonus chapter to play, wallpapers, strategy guide, and more. Remember that Big Fish Game Club Members pay only $13.99 for Collector's Editions (or 2 club credits), and collector's editions count 3 card punches of 6 total needed for a free game.

Thanks to Kaleigh for the walkthrough!

Thanks to Kaleigh for the walkthrough!

I have counted clovers in other walkthroughs and the most clovers they found were 94 and I cannot get the award unless I find 100. Does anyone know a site that has all 100 found or is this an error in the game?
I think they should have given the award for 70 or 90 because I am beginning to believe there are not 100 clovers.

Abigail -
Check the walkthrough above your comment for the location of all the clovers/shamrocks.

There seems to be only about 94 clovers and 34 ravens in the above walkthrough . . .working on a full sequence now and will soon post a full list with count and corrections (right v left type corrections)

Thanks to Kaleigh for the original walkthrough!

There are 100 clovers, I have personally found all of them :) keep looking, i promise they are there!!

How do you access the walkthrough for Midnight Mysteries Devil on the Mississippi? I am not seeing any links to get me there.

[It's in the section just above the comments. Midnight Mysteries: Devil on the Mississippi Walkthrough -Jay]

The link for the walkthrough doesn't work. Just keeps bringing you back to comments. I usually have no probs finding a multitude of walkthroughs and cannot find any execpt on youtube. Those take way to long to load. Any ideas? Thanks!

Hello, Julie! I think you might be a little confused. You're being taken to the comments because that's where the walkthrough is located. Look for the highlighted box labeled "Walkthrough Guide" at the top of the comments, then click the spoiler tag right under the title "Midnight Mysteries: Devil on the Mississippi - Walkthrough" to expand the box and read the walkthrough.

Hope that clears things up! :)