You know what they say. The family that's imprisoned together, must solve platforming puzzles to escape together. That was my grandma's favourite needlepoint pillow, and it's the plot behind Meowbeast's Money Movers, where you must control two brothers at the same time to help them reach the exit in levels full of lasers, switches, moving platforms, guards, and more. We'll call them Biggun and Littlun for writing coherency's sake. Biggun is, well, big. He controls with the [arrow] keys, and while he can't move fast, which means he'll trip laser alarms, or jump high, he can pick up and toss objects with the [spacebar], push heavy things, and so forth. Littlun, being smaller and faster, can jump higher, squeeze through gaps, and race through laser alarms without tripping them. Both brothers can provide a platform to help the other reach a higher place in a pinch. They both need to reach the level's exit in order to win, and while the three money bags scattered around each stage are optional, you'll need all sixty of them to open the game's bonus level! 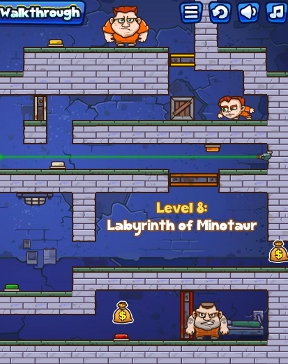 With games like Bob the Robber and its sequel, as well as Jim Loves Mary and that sequel, Meowbeast is solidly establishing their name as a mark of quality, casual puzzle platformers, and Money Movers is no exception. The production values are high, the controls are smooth and responsive (if sadly lacking in any ability to rebind keys for players without [WASD] keyboards), and the level design is tidy and well thought out. While later levels are trickier, however, most stages rely a bit too heavily on simply pushing blocks on switches instead of incorporating all or even just more of the elements the game introduces at the same time. As a result, it never gets quite as challenging as it could be, and you sort of wish it would. Come on, Money Movers. I can handle it. Bring out the dogs. Or the robotic dogs with bees in their mouths, and when they bark they shoot bees at you! Still, Money Movers is a solid little game that's almost safe for everyone provided you don't mind the H-E-double-hockeysticks or the rhymes-with-missed-off terms in the opening audio, and is a fine addition to the genre.

Now this is a professional game! That's in contrast with all the unprofessional ones out there. What a relief it is to play a game where the authors aren't knobheads.
It's just a shame that the game is low-key (or in a disguised way) immoral, as if society wasn't already corrupt enough. Shame on the authors for not using the opportunity to promote proper values among the youth, spreading instead the opposite.