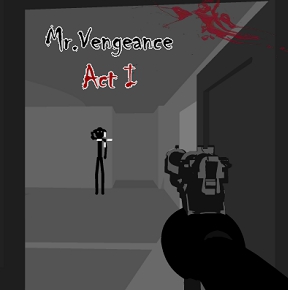 Maybe I'm expecting crime syndicates to have a unreasonable level of precognition, but I gotta say... I really can't see how killing the family of a guy named Mr. Vengeance is going to end positively. I mean, you have to think that with that name might get a little ticked off and have access to revenge-friendly weaponry. But hey, you have to kick off a rail shooter somehow, and you can't argue with what works. It's Mr. Vengeance: Act One by Russian developer TxGames. He'll roar. He'll rampage. He'll get bloody satisfaction.

Controls are typical for the genre. Point and click the mouse to advance scenes and fire weapons. Switch to a different one with the [1], [2], [3] and [4] keys, and reload with [R]. [Spacebar] uses a health pack. Bullets make bad guys dead.

I really dug Mr. Vengeance, but I can't deny its flawed writing. If you took Max Payne and ran its text through Babelfish several times, you'd pretty much have the script for Mr. Vengeance. Let's just say quite a bit gets lost in translation, and while it's absolutely hilarious, I don't think it was meant to be. Of course, it's not like Max Payne didn't have an obvious debt to John Woo, Death Wish, and the Matrix, but Max never said he was in a laundry room that "felt unbearable smell of dampness".

This caveat aside, Mr. Vengeance has a distinct edge of cool. The graphics and animations are absolutely gorgeous for a stick-figure game, with a stark monochrome-and-red color palette that really makes the action pop. It's also has a good range difficulty, with health-packs and ammo aplenty for noobs like me, and harder replay modes for the more skilled. It would have been nice to have different enemy models to blast, but I kind of like how it implies the targets have become indistinguishable in Mr. Vengeance rage... though, again, I don't think that was a consideration by the author.

Mr. Vengeance isn't a revelation, but it's twitchy, bloody and fun. That's really all it need to be and, as I was playing, all I wanted it to be. "Act One" implies the development of an "Act Two", and frankly, I can't wait.

Just a heads up, clicking the link in the picture opens two windows, for some reason...

I found this game a little boring. I'm not talking about difficulty level here, just everything. The stick figures who fired with the same animation over and over again, the rather dull sound effects of all the guns, and the terribly repetitive boss fight made the game annoying to play. It's a good thing it's so short, or I probably wouldn't have finished it.

The graphical style of black stick figures on monochrome backgrounds is also beginning to get on my nerves. Just like the black foreground/glowy background platformers, this style is looking a lot more like an easy shortcut than anything that resembles visual bling (lost for words at the end there). This game wasn't trying to be anything new, but it failed at even achieving interest.

It was okay. There's hardly any replay value, the most interesting gimmick outside of the final boss being "Guy who pops out from behind a wall and shoots you", which the game throws at you almost constantly, as if it knows that the endless tedium of identical stick figures is boring but doesn't have anything else left to give.

It's slow, and uninteresting, and there's nary a single bell nor whistle to be found. But still, I enjoyed it, a little. Its looks are decent, and control is pretty smooth. There's some potential here for a good game, it just needs some work.

The initial gameplay and story line is pretty much a flash copy of Max Payne.

I'm sorry but...
"The graphics and animations are absolutely gorgeous for a stick-figure game"
By what standards? 1998?
The precious few animations are jerky and look unnatural, the backgrounds are uninspired and lack detail, the creator even managed to mess the stick figures up somehow and then he just copied the Max Payne story and it's interface.

And I really doubt the author was trying to be all artistic, if he had been, he'd put far more effort and even more creativity into this.

Please go play Sierra 7, compare Mr. Vengeance to that, then adjust your review.

This was a quick fun but nothing special. Took me while to realize i could reload with 'r'

"I really can't see how killing the family of a guy named Mr. Vengeance is going to end positively."

I disagree. As a visual style, I prefer the border-less shadows of Mr. Vengeance to the thick lines of Sierra 7. I would probably agree that Sierra is the better game overall, but Mr. Vengeance has its own good qualities.

I don't know how to take out the last boss. He's so hard to be finished. I tried several times and the boss was still "alive", but "I" was always "dead" at last.

Do you mean the enemy who throws objects at you? If so, a working strategy I found that made him much easier to defeat was the following:

Using your shotgun, plan your two shots by alternately using 1 shot to break the object he throws at you, then the second shot to hit the boss immediately afterwards. Reload and wait for him to throw a bottle at you again.

If you miss any of the bottles, heal yourself with a healthpack by pressing [spacebar] then continue repeating your two shots in that order. It's all about being patient, there's no time limit!

When your shotgun runs out of ammo, switch to the uzis repeating a similar process of concentrated fire.