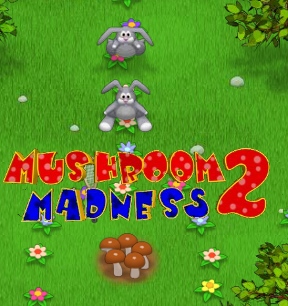 Ah, the cute, fuzzy, adorable denizens of the forest. Bunnies, porcupines, bears, they're all just so... cute, aren't they? In cartoon form they make some go awwww, and others squeal, "Cute!" What happens, though, when you're sick of all the cuteness? When if you see just one more cutesy furry critter you'll go postal? Then check out Mushroom Madness 2, the new tower defense designed by Silen Games, which will fulfill all your fuzzy homicidal needs. Now with 50% more explosions!

Nominally a tower defense game, Mushroom Madness plays more like a cross between tower defense and a frantic game of whack-a-mole. There are mushrooms, you see. Tasty, delicious mushrooms and they are all yours. But the inhabitants of the woodland would like to get a piece of your mushroom action, so it's up to you, the intrepid farmer, to defend the fungal treats at all costs and against all comers.

The control structure is amazingly easy. Your mouse controls the movement of whatever weapon you are carrying. Simply click the left click button to whack, shoot, or otherwise cause mayhem. You also use the cursor to pick up coins dropped by the dying creatures, as well as keys to safes scattered around the area. Use the keys to unlock more money, jewels, and weapons, just keep an eye on the greedy little critters as they come at you from all directions.

You begin with a simple weapon, a croquet mallet. As the bunnies bounce into view with an eye for your morels, you must... well, beat them to death with a mallet. Repeatedly. Until no more bunnies are left in the woods, at least, at that level. Eventually other creatures will come, porcupines, bears, moles, birds, and owls, each with a yen for your tasty fungi. Fortunately you can power up with more and deadlier weapons, including several types of rifles, bear traps, land mines, and bombs, amongst other things. Boxes will occasionally appear, cardboard boxes that can be beaten open, wooden boxes that can be shot open, and metal safes that require keys. Open a box and a cornucopia of surprises can tumble out, from extra money to extra weapons, just what you need to deal with the ongoing furry madness. All you need to do to complete the round is make sure that at least one of your mushrooms survives. Simple. 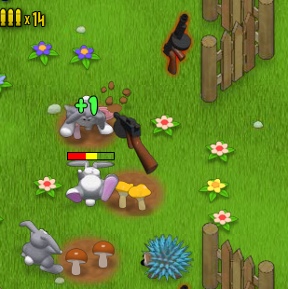 Analysis: The sequel to the popular Mushroom Madness, Mushroom Madness 2 ramps up the gameplay from the variety of foes to the variety of scenarios. With 48 new levels, there's lots of mushroom saving to do. Attain certain goals within a level to earn stars which can unlock more advanced levels. Silen Games makes sure there's enough variety to keep a gamer interested; from the basic "defend the mushroom" levels to even simpler plain tower defense levels (just kill all the animals before they cross a line); levels that require you keep the animals out of your fortress; challenge levels to see how many boxes you can open; and frantic, unlimited levels where the animals just keep coming and coming...

The backgrounds are bright, cartoony, and beautifully animated. All the little furry creatures have such personality, it's almost a shame to beat them to death in the name of gameplay. Almost. Lively, frantic music accompany each level as the action becomes more fast-paced than the one previous, until you've killed all the animals, destroyed your mouse, or given yourself a wicked case of carpal tunnel. Amusing little voice-over phrases round out the wackiness (forgive the pun).

The gameplay can get a little samey in the upper levels, as well as so frantic it might take a while to come down from the adrenaline high. Still, some days, don't cute and furry animals just make you want to go all Ted Nugent on their... bums? Mushroom Madness 2 fulfills that inner madman in all of us who just wants to smack, smash, DESTROY! Play Mushroom Madness 2, animal control as casual gameplay. Let your inner masher out and get whacking!

Just in time for the Easter Bunny! LOL

I enjoyed this sequel ok. I liked the increased variety of weapons but for all the upgrading I never felt like I was getting anything new(and the individual rackets/clubs/mallets weren't upgradeable. I didn't expect an RTS but I did get a little bored by the end. I really liked the ability to swap between the four play types(especially for building up cash).

I feel really bad fighting the little cute hedgehog ! Especially when they are on their backs and move their little legs !! >_<

I cannot get 3 stars in level 11 - HOW do you use all the weapons? I kill everything way before I shoot all the guns. I've maxed out all the upgrades, just a few stars shy of unlocking all the achievements....

Thanks for the tip JIGuest. Tried several times to use all weapons before coming here and figuring it out.

TIPS ON WHAT UPGRADES TO DO FIRST:
Get the money upgrade to the max first, and then the coin magnet. Along the way, update to a club. Then, get a mace.