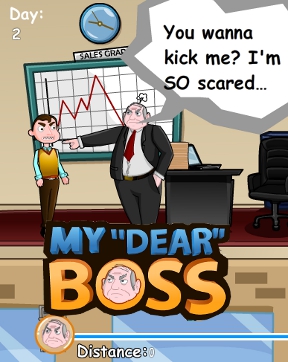 Scott Adams comic strips, Jason Bateman movies, and Ricky Gervais TV shows would have us believe that all managers are clueless, sadistic, petty tyrants. Fortunately, that isn't a problem here at JIG: Dora only occasionally breaks out the burning coals, and its just on alternate-Tuesdays that Jay chains us to the hull of his massive galleon so we can row him around to the beat of a pounding drum. But if your superior is one that might be well-served by a solid kick in the rear, then Origaming has a action launch game for you!

My "Dear" Boss stars a set-upon office peon, whose workplace stress reaches such a fever pitch, that his only recourse is to kick his boss through a third story window. For distance. And upgrades. As you might guess, this is a goofy, little game, that makes for some good mindless fun. It's not particularly innovative, but the mix of things the boss can fly into is interesting, and the cartooney art is a perfect fit: It's just hilarious to see him flop around in the air. It takes a little while to get going, some of the later launches can take longer than they should, and the developers definitely missed an opportunity for including a "Design-A-Boss" option, but overall, My "Dear" Boss's infectious silliness should win you over.

I get "The requested page could not be found." :(

[A small hiccup, should be fixed now. -Jay]

Not working here, it seems to get stuck on the loading screen indefinitely.

[I've no idea what OS, browser or Flash Player you're using. Try emptying your browser cache and reload. -Jay]

Good game so far, but I don't really understand how to handle the "encounters" with people on the street.

Played this a few days ago from start to finish, and despite my previous comments about /follow - immense satisfaction in this one:)

I thought it was funny, not hugely skillfull but it kept me smiling. was sad to see the end it was kinda ...

It was kinda graveyard and over, while I was having fun - it got too easy I think once you had all the extras

keep clicking in the meter, and try and stay in the green zone

Game was just okay, nowhere near as good as others though for a couple reasons.

First of all, in the beginning there's not a lot you can do during flight, mostly just watch and wait. This is fine until....

You start getting construction workers or protesters or ex-employees, where you now have to sit and wait to see if you hit one of those three....and click on a specific spot within a short time frame or lose the benefit of hitting them. This is a pain when the turns can go for minutes at a time and you don't want to have to sit there and wait to see if something happens. If, however, the meter to do something was infinite it wouldn't be so bad. But being required to sit there and wait, and then find the correct place on screen to click, makes the game far less enjoyable.

Give me flying penguins any day over this weak attempt.

My comments:
Collision detection was extremely ropey. I think I only ever managed to hit 1 gold coin. Maxing out all frequency of ground level objects. Non-interactive ones that is, as pointed out by Username since these force you do be attentive and removes some fun element.

Overall, I probably got quite lucky (was far from maxed out and finished the 3rd stage on my first try) but had fun overall.

And to my boss, I only have two words to say...

That was silly fun!

I played it on and off throughout this week, usually as a break from homework. It was a pretty good diversion.

Did anyone get the Big Bucks/$100K badge? My game got stuck and never game me that badge despite how much money I actually have.

Also, after getting all the upgrades, its not necessary to kick hard, nor do anything for the interactive portions of the game. Chances are, you'll automatically RIP him anyway.