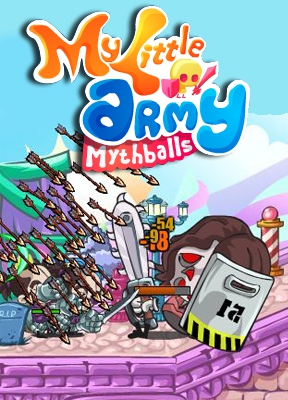 Attacking the base is a time-honoured military tradition amongst gamers. In the same veing, losing your base is simply an unspeakable blunder. Such is the world of the base attack/defend title: spawn a stream of soldiers towards your nemesis (conveniently planted on the far side of the screen), all to dethrone him from his oversized riding beast. He's doing the same to kick you off your giant monkey/limbless panda/royal riding turtle. Such are the tribulations for warlords in Artlogic's action-packed real-time strategy game My Little Army.

After choosing your preferred difficulty (easy, medium, hard — each with a different character and storyline, but still the same game), you set about defeating your enemies on the battlefield, which is represented by a two-dimensional horizontal plane. Your character, seated on a giant animal, is on the far left and on the opposite side sits the warlord whose fall will mark the end of the level. To wage war you spawn soldiers via four different icons at the bottom. You can also cast spells to aid your fighters or do damage to the enemy. Spawning soldiers require mana, which you slowly regenerate, while a unit cap makes sure you don't swarm the battlefield.

Each mission awards golds and new items. Back at the home base you can change your army; applying new class types for improved attributes and giving them better weapons. You can also buy new spells, weapons and classes at the shop. In addition to the story missions there are random bonus missions where you can make more gold and get a chance to test your army (one, called Friday The 13th?, had zombies in hockey masks with chainsaw swords).

The trick to victory is to manage when you spawn soldiers and how you spend your mana. Archers and magicians need to be covered, but they often can swing the battle for you. Warriors, your front line, must be well armed and easy to deploy. But every upgrade you make to a unit renders it slightly more expensive. On top of that, casting spells is useful, but you might land yourself in a mana deficit; not where you want to be when a boss starts to stumble towards you after flattening your forces. 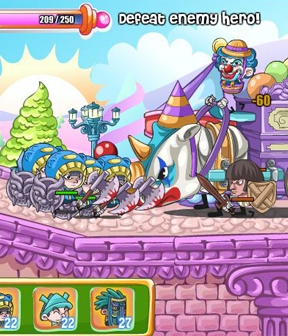 Analysis: My Little Army is clever strategy fun that wears its real-time nature on its sleeve, made from cutesy graphics and carried forward by purely-for-decoration storylines. You might even be fooled by thinking that this makes the game easy. See if you feel that way when a giant Jason is stomping your Khan Kong's face.

My Little Army makes this genre more playable. Attack/defend games tend to overdo things and make even early levels a bit too demanding. Not here, though if you do not pay attention to your hero and army stats, you'll soon be scraping yourself from the ground. It's a great example of how the base attack/defend genre should work.

Where the game needs a bit more work is in the nitty-gritty of arming. Although the help screens do well to illuminate the basics of the game, some parts of the buying/arming side, specifically the quantities and how they impact your decisions, could use some demystifying. Combat, in comparison, is straight-forward, but if you can't get to grips with the logistical side, you eventually start to lose. It would be sad if that isn't due to the player, but the game not making concepts more understood.

So My Little Army is not perfect, but it looks good and plays well. Its themed levels and impressive amount of units, enemies and weapons, not to mention the wacky character design, deserves a nod of acknowledgement and a bit of your gaming time.

I had like 300k after I beta the game and the max star missions.
I remember reading about soft reset and how some of the story missions gave good gold for relatively no work.

So I start a new game, and kept all of my items, but no upgrades or gold.BLAH. Give a better warning if you are going to have such a thing in your game. It makes no sense

Thank God this game has nothing to do with ponies.

I played this some weeks ago and found it to be lots of fun but with a significant number of issues that could be improved.
* The quality of the writing/language is borderline, such that I got the gist of the plot but it didn't motivate me to play to the end. I think this is the single most important area that the developer could work on.
* The player is mostly left to figure out how to navigate the menus to properly set up an army.
* Good variety of skills, characters and weapons.
* It would be nice to have empty slots in the menus blanked out somehow so you can see exactly how many classes etc. there are and which ones haven't been unlocked.
* Some weapons and characters never appear in the shop and make very few appearances in the game missions - unless you are lucky to be awarded one when you complete the relevant story mission, you won't be able to collect them.
* Frost attacks are overpowered - once the appropriate weapons are unlocked, you become practically undefeatable. Add to that a poison weapon (does damage as a percentage of enemy health) and all the bosses become easy.
* Similarly, one of the early achievements you can get will award you a high-damage melee weapon that makes you undefeatable for the early- and mid-game.

That clowny "woohoo!" is really grating after a few times.

What does D.Strike, D.Ice, etc mean? Is that defense or damage? I assume higher is better, since mages seem to have higher fire/ice/thunder and negative melee/slash/pierce. I thought I might have missed something in the tutorial, but I can't find any information.

[Link fixed. There was a stray single quote in the tag. Thanks for the note. -Jay]

I was worried because I couldn't find a save option, but it autosaves for me; maybe there's been an update?

Mmmkay. I figured it out. D. element is % damage reduction vs that element. For example, Mike T's take drastically reduced damage from strike-type attacks, notably fists and rocks, especially if they're in the fighter class.

The game is fun, but the dialog / writing (translation?) is quite atrocious. It couldn't really tell what was going on other than they were fighting over balls.

There was actually a line in the game where someone says "You need my balls more than I want yours!"

I enjoyed the customization feature of my units a lot, but the game as a whole I found poorly balanced.

Unlike most of these "2d send your units to the other side" games, this one has a rather tight unit limit, and most of your units are pretty much expected to survive all the way the end. The distance to the boss is also rather long, and any unit you send to reinforce/replace will take quite a while to get there. This (along with the fact that you can basically wait til your mana pool is full before deploying anything) makes the mana costs of your units largely irrevelant. The poison spell is incredibly strong esp. later on with its % based damage and only a very few units can resist. In fact with full mana upgrade, you can solo basically anything with just poison alone. Without, it becomes A) very boring with bosses having tens of thousands of hp, B) survivablity largely depends on whether or not you can keep a unit permanently frozen or have a unit that can basically ignore the enemies attack (like a Mr. T tank against strike units).

Well, I loved that game, but I agree with some comments. Basically, you just have to get the Crystal Spear ( which freezes any ennemy ) and make 8 cavalry unit attack. Even on the hardest mission ( Oh Snap!! It's Greg! ), on hard mode, it works.
Anyway, I think My Little Army was really good, even though some issues were quite annoying and pleasure-breaking.

I find it annoying that I can't sell anything in the shop... I don't need 5 wooden swords, why can't I unload them? Unless I'm missing something somewhere that allows me to do that?

@Rich W - That is true - it doesn't appear that you can sell items. But I suspect this was intentional to force you to play secondary levels to make gold. Pretty much all the grinding is done through battle, not looting.