Infinitap Games' Neverending Nightmares is a indie horror adventure game about a very troubled young man named Thomas who seems to have a complicated relationship with his sister and a slipping grasp on reality, but it's also about its creator's struggles with OCD and depression. Thomas explores a house that seems to have no end and decays around him the further he goes, and whenever he meets a violent end, he wakes up unharmed in his bed, though he'll have to press deeper to find out why he seems to be stuck in such a nightmarish loop that only gets more disturbing even when he makes his way out of the house itself. Use [WASD] or the [arrow] keys to move and hold [shift] to run, though not for long or very far since Thomas has apparently been neglecting his Spin classes and has the endurance of a pug puppy. For the most part, you'll be keeping an eye out for colour, since that denotes things you can interact with in this harsh black and white world, but each area is also usually being stalked by a specific sort of monster. Since Thomas is only wearing his -3 to constitution jammies, he'll die instantly if something gets a hold of him, so you'll have to figure out how to sneak by each new creature by making use of your environment. The game has multiple endings and even multiple paths to reach those endings, and with a unique and disturbing visual style, it takes a very personal tour through a different kind of horror... albeit in such a way that the gameplay might leave something to be desired for some. 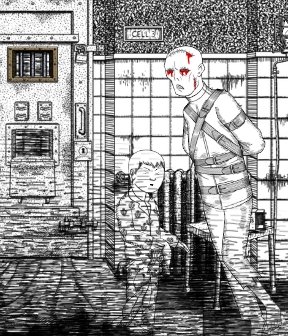 Games dealing with depression and other intensely personal issues always have a tough row to hoe because they are, well, intensely personal. Everyone experiences and copes with them differently, and as a result, the knee-jerk reaction can be to label something that doesn't fit with someone else's particular experience as false, rather than taking it as yet another view on a many-headed hydra. Taken as one such example, Neverending Nightmares is a gorgeous and ominous illustration, by turns foreboding and freaky, with meaning and subtext everywhere in recurring themes and areas. It has such a fantastic visual style and can be incredibly disturbing in some places, with the exception being to the bland expression on Thomas's face. The sketchy style creates grim, oppressive environments and unsettling characters, with detail both mundane and freakish throughout. On the other hand, however, viewed purely through that ambiguous label of "game", Neverending Nightmare has its share of flaws. The repetition might be seen as a way to illustrate certain underlying themes, but it makes the limited interactivity wear thin very, very quickly, and since so little happens, you spend a long time wandering around through identical rooms and halls.

As a result, Neverending Nightmares is best approached as a piece of interactive art by players who love searching for symbolism and playing games in the dark with the sound turned all the way up. It's the sort of game that deals with very serious, very personal issues in a way that feels both grotesque and familiar, eschewing jump scares for crafting a sort of psychological classic Gothic horror atmosphere. It's clear every aspect of the design has been well thought-out, and the striking use of, uh, rather a lot of red makes Neverending Nightmares one of the most visually unique and memorable games to come along in a long time. This isn't Amnesia: The Dark Descent, or Slender, or even Dreaming Mary, and if you go into it expecting or wanting that, you're going to be left feeling a little cold on the repetition and lack of any real puzzles or gameplay beyond moving forward. It is, however, distinct and striking in a very unusual way for a horror game, and if anything, we need more games willing to explore different themes in different ways, rather than sticking with what's popular or tried-and-tested. There's an earnestness to Neverending Nightmares that some will find appealing, and while its gameplay may leave something to be desired, these are dark hallways and darker corners that are still worth walking down thanks to some masterful atmosphere and imagery.

For the love of Pete, tell your graphic designer to STOP STRETCHING GRAPHICS OUT!!! I know he/she has to everything in a 640x230 frame, but CROP, don't stretch! This looks like Neverending Nightmares stars an obese midget. Seriously, "Don't stretch a graphic more than 10% is one of the first things they teach you in design school," and he/she has been butchering your previews for the last several months now.

Thank you for your polite suggestion. I'll be sure to take it into consideration. :) The screencap in question is actually from a section of the game where you do in fact play the main character as a small pudgy boy.