I was going to start this review with a parody on Metallica's Enter Sandman, but then I remembered when they played this song at the gym last week and nobody else knew what it was. I died a little inside that day, but Bombocracker's puzzle platformer Night Lights: After Dark is so cute it revitalized me enough to make me keep on going just a little longer. In this sequel to the original, the premise remains the same as you use [WASD] or the [arrow] keys to run and jump out little blockheaded blue hero through levels to the exit. Most of the level is in shadow, however, and that shadow can make your path dangerous or just block it off entirely by creating hazards and walls to make your life difficult. Fortunately, if you can manipulate the light, you can also manipulate reality, since some obstacles will disappear entirely if the shadows are dispelled either by flipping switches or shining the lantern you can find, carry, and put down with [X] or turn on by holding [C]. 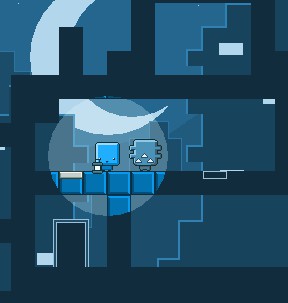 All of this should sound pretty familiar if you played the first game, and admittedly for the most part, After Dark feels like a fairly straight-forward level pack with all the same strengths and annoyances from the original. After a few levels, however, After Dark changes things up a little by introducing a buddy system, granting you a triple-eyed companion who will follow any light that gets turned on, from your lamp to the lights stationed throughout the area. He's vulnerable to danger just as you are, however, so while you're the only one who needs to reach an exit, if he dies before you get there, you'll likely need to restart, since luring him to press switches to open your path for you is crucial. So... yes, in a way, Night Lights: After Dark has sort of turned itself into a platformer crossed with an escort mission, which isn't going to ring bells for everyone. Now more than ever it feels like the game should have gone full puzzle, since the stages that focus on that rather than timing are a lot more enjoyable and cerebral. Despite its potential frustrations, however, Night Lights: After Dark is still a very cute, clever little game, and at fifteen levels it's hardly going to overstay its welcome.

4 levels in and already I can't get any further without consulting some kind of walkthrough. This is a bad sign.

I'm sorry, but I'm going to have a fit. Why oh why do game designers fail to give separate control over music and FX? Am I the only one who cannot handle the constant, repetitive music, but also likes FX? I ... just ... don't ... understand.

I found the music to be rather relaxing...anyone know where I can find a copy of it?

Jump up to the ladder (don't even need to wait for the platform, actually). Push a block down to where you started, then down onto the spikes. Drop down onto the block; from there, it's a pretty easy jump to the exit.

Definitely not how the level is supposed to be solved, though.

What are you talking about? The box ALWAYS drops when it passes under the light.

@ Onyx Mouse ... you could email the developer. The address is in the credits.

Rygar and yaddab, if I may add to this conversation:

There are two boxes. One drops at the light. The other doesn't.

Ehh, it took about twenty minutes for me to beat without aid of a walkthrough. It was short, and maybe a little on the easy side. The puzzles were pretty good, a bit more timing based than the previous Night Lights.

The game had the same problem as Night Lights, too:

NO ENDING? D: I was hoping for at least a "Game Complete" screen. Maybe the blue headed protagonist could befriend the shadow guy?

Did anyone have to use the lamp in that level? All I did was move the light and the shadow followed it onto the switch below, which opened the door. Didn't even have to use it. Huh.

@ Onyx Mouse
Usually it's Tom Black, the developer of the game who composes the music himself. He did it for the first opus:
https://jayisgames.com/games/night-lights/ where the music is for me even better than this one.

I played the first game and I finished it over 50 times! Night Lights series are one of the best puzzle platformer series that I ever seen!!

The first music is available on Newgrounds; if you visit the Night Lights game page and look at the credits on the left panel, there's a link to the track which you can download from the developer for free. This game, however, does not appear to be on Newgrounds, so I'm not sure where a copy of the audio can be downloaded, if possible.