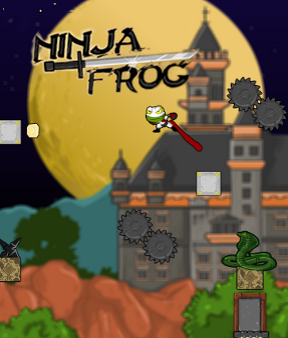 Just sit right back and you'll hear a tale, a tale of a fateful... prince. Prince Edward, who was turned into a frog by an evil sorceress, fled in shame from his homeland only to wind up shipwrecked on the shores of Nippon-Koku. There he met a kind sensei who renamed him Kaeru and taught him the ancient art of being Ninja Frog. One day, Kaeru learns of a special gem that can reverse the curse, so he sets out on a dangerous quest, with your help, in this fun puzzle platformer.

Your goal is to navigate through forty-eight perilous levels and collect every gem in sight before moving on. Almost entirely mouse driven and relying heavily on physics, direct Kaeru around such obstacles as spiders, snakes, axes, and flames by jumping—and sticking—to any non-hazardous surface you can find. A dotted white line shows Kaeru's trajectory; depress your left mouse button, point to where where you want him to land, then release when ready to jump. Complicating matters, his stickiness wears off in seconds, forcing quick decisions about where to go next. It's a bit like Sticky Ninja Academy, just less sticky and more... green.

Ninja Frog starts out easy but quickly becomes a lesson in discipline and diligence. With a difficulty progression as rocky as the fatburner setting on a treadmill, you'll encounter several scenes requiring maddeningly-precise timing and acrobatics then breeze swiftly through a few more before hitting another wall of pain. Trial and error rounds out the learning curve and there will be blood—very red frog's blood—splattering over and over before you've figured out the magic sequence. Yet the challenge remains compelling and, oddly, fun for those who take great satisfaction in accomplishing tricky maneuvers. Aah, Grasshopper, you have learned well.

I can't get the big rock to roll all the way over to the red button on the right; it keeps getting stuck.
Thanks!

Same problem here- although the ground looks perfectly flat, and the rock -- by physics standards -- should not get stuck, it does. Maybe it's really a magnet? Had to abandon the game at this level.

I figured it out - you

get the rock on the middle of the metal blades, then use it to jump onto the red button. if you jump on it once, the gold coin becomes accessible. Jump on it again and it closes

But I haven't been able to do it yet, so maybe that's wrong. But I did figure out that

Okay - this is my last stupid post. I just saw that it is a "high-difficulty game". That explains that!

You're right that you only need to find a way to jump on the button once... Rolling the rock over isn't necessary.

I also went through several other levels where I didn't need all the tools provided. Probably more than one method of success on a lot of them.