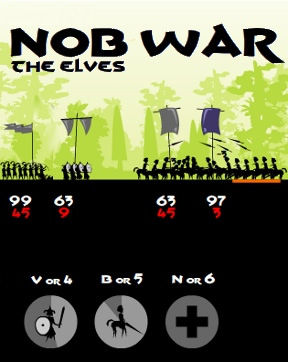 Ah, elves. Fantasy's punching bags. No matter how many Legolases and Drow literature throws at us, elves will always either be objects of worship or eye-rolling amusement for you; there's really no in between. Have you felt the sting of your friend's scorn because you think elves are rad? After playing Nob Studio's side scrolling title of action warfare Nob War: The Elves, nobody will ever make fun of your elves again. At least, not until the next time you try to roll up Shylana the Elven Bardess at your next gaming session.

There's no story given to explain why your army of elves is trying to massacre its way through twenty castles of opposing forces. The short answer is probably just "elves are jerks". The goal of each level is to march your troops all the way to the right side of the screen to overtake the enemy stronghold. Move your squad of archers with the [arrow] keys, and tap [Z] or [1] to fire. Remember that you can move back to retreat if an enemy gets too close to your puny archerflesh, so keep foes at the proper distance to hit by hiding behind the cavalry if need be. When archers are not enough, you can summon squads of centaurs or humans from recharging timers to fight for you. Which you might want to do, since if all of your soldiers are wiped out, it's game over for you. Oh, and you also fail if all of your slow moving flag guards are killed, so get to work, meat shield.

Each enemy felled grants you cold, hard cash (or the elven equivalency of cash, which is probably berries or morals about friendships or something), which you can use between levels to upgrade your troops or weapons. After all, nothing says "friends of the forest" like "flaming arrows of death", amirite? If you save your cash, you'll also eventually be able to purchase an important healing ability, which you can use once per level to restore your units to fighting form. 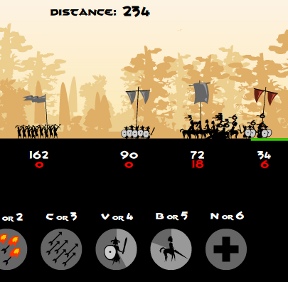 Analysis: Sort of a defense title, sort of an action title, and sort of a strategy title (but only sort of), The Elves borrows bits from a lot of genres and winds up with a fun twist. Although levels start out simple, with you able to mostly stroll unimpeded from one side of the screen to the other, they get more challenging as you go along thanks to a nice difficulty curve. The cooldown time for summoning new units forces you to think strategically, and you'll have to be quick to keep your archers out of danger and help your other units in the fray. Being in direct control of your archers enables you to dart in and out of battle, and provide support to the frontlines. It's also interesting to note that after going through several stages where I had sole command over the fine art of shooting things with pointy things, my knee-jerk reaction was "THAT'S CHEATING!" when the enemies suddenly decided arrows were a keen idea too. Everyone knows I invented them.

In fact, where The Elves trips itself up is actually in its rather bland presentation. While the visual style is at first striking, if nothing we haven't seen before, it quickly begins to feel stale. You're always marching across the same backdrop to the same castle listening to the same dramatic, generic medieval war march. You also might wind up wishing for a greater variation in troops; come on, I thought elves were all one with the planet and junk. At least let us summon some owlbears or something. (Although trampling your enemy to dust with a herd of angry deer would be both fun and satisfying.) The result is a game that, while fun and challenging, ends up feeling like it didn't try quite as hard as it could have. Oh, and while I'm at it, why is there no pause button? The stages are relatively short, but this seems like an oversight.

Nob War: The Elves is an interesting take on the action/defense genres that could have been a lot better simply by adding some more variety. (Which is, as you know, the spice of life.) Gamers looking for something different will find it here, and the challenge presented by the fierce fighting in later levels helps make up (somewhat) for the lack of change. Perhaps a future incarnation will add those sought-after attack hawks, or at least the ability to issue orders to your troops, but as it stands, The Elves is still a fun, deceptively simple title that will teach everyone to give elves the respect they deserveHAHAwho am I kidding? Now go put on some tights, commander. Your army awaits!

Unfortunately, I found this game got boring very quickly. :(

It's not often that my opinion of a game here is higher than the reviewer's. Slightly less rare are the time where my opinion matches their's. This is one of those times.

Fun at first, but the pacing sucks and there's not enough variety. And this is the kind of game where variety is important.

anyone know how to turn off the inane sound?

The elven equivalent of cash is +rope reed cloth+.

You can turn off the sound on the Level Up screen down the bottom.

This game is way too easy.

All you have to do is level up your normal arrows enough to be able to take out an archer in one hit. Then you just max out your numbers and health, slowly beefing up your centaurs and humans.

Pacing is not challenging one bit. Halfway through the game I stopped being careful and just randomly charged into the archers just to launch some arrows because it was so easy. I still never even got close to losing half my archers.

This game definitely needs difficulty tweaking, and as everyone else said, variety.

Keyboard doesn't work for me and mouse control is just very awkward. Does anyone else have this problem? (on Windows 7 using Firefox)

I don't know about Jayce's comment about the game being too easy, because

on the last 5 levels, even if you max out health and bow attack, the enemy bowmen will decimate your archers

but I do agree that it gets horrendously boring. Variety would have helped.

I scored 3080, think that may be almost the top score possible.

Replayed this game, I love it.