I've always had a fondness for bounty hunters, some more than others. Nerdook is known for a lot of things, such as creating clever hybrids nobody else has thought of, but until today he wasn't known for swarms of tiny robots blasting each other repeatedly in the face with lasers at the behest of their human masters. Orbital Onslaught! is a strategy action defense game with RTS elements that stars you as a bounty hunter setting out to clean up the galaxy, one evildoer-with-a-bad-haircut at a time.

Although it might seem confusing at first, gameplay is actually very simple. You'll travel to different planets and engage with the criminals hiding out there. Since they won't go quietly, you'll have to beat them into submission by deploying various units with various strengths and weaknesses to storm the battlefield and defend you at the same time. Your opponent will be doing the same, and every minute or so you'll get a "deployment turn" which lets you choose which of your remaining troops you want to bring into the fray. (After you deploy a unit, you'll have to wait a certain amount of "turns" before you can send another member of that same unit out onto the field, so choose wisely.) Still sound complicated? Don't worry, the in-game tutorial will walk you through the basics.

Winning a battle grants you fame and, more importantly, cash, which you can spend on buying new units or leveling up your existing horde. Even if the units available for purchase are the same type you already have, make sure you don't dismiss them out of hand; all units are randomly given a bonus, like +10% firing rate, and so the snipers for hire might wind up being more useful than the snipers you currently own even if they're at the same level, Just be careful not to lose or click "Quit" unless you really mean it; while you do get to keep some cash even if you lose, retreating counts as a loss, and you only have three losses before the galactic council penalizes you for your incompetence. This results in you being unable to earn anymore fame, and the council taking a 25% cut out of all your future earnings, for which I believe the scientific term is SHENANIGANS. 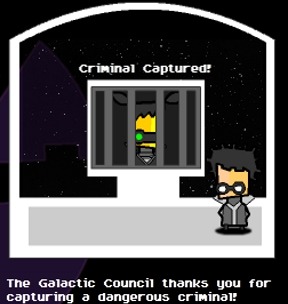 Analysis: Leave it to Nerdook to make bloody warfare with that galaxy's worst examples of scum and villainy adorable. The whole thing is packed with such quirky charm you can't help but smile as you smear you opponent across the landscape, from the tiny little minion-esque troops to their names and descriptions. (If you don't think having units called Blood Badgers and Unseen Bulls is funny, then there's something wrong with you I can't fix.) Call me strange, but I think tiny "Rrrrrrrrrrrraaaaaaaah!" battle cries as your troops charge into the fray would have made the presentation that much more perfect. Speaking of audio, however, you might find as I did that the short looped music tracks were more annoying than anything else, but hey; isn't that why we all have mute buttons and Ride of the Valkyries cued up on our MP3 players?

The whole strategy aspect is sort of a mixed bag and feels like it mostly comes down to deciding what sort of troops to take into battle to counter the strengths of your opponent's army, like an intergalactic take-no-prisoners version of Pokemon. Die-hard RTS fans who bleed the collective works of Sun Tzu will probably be quick to point out that this a fairly diluted example of the genre, but for the rest of us, that's probably okay. While there's no denying that the dozens of little black warriors swarming all over each other don't really offer much in the way of control or strategy, it does make it all extremely accessible to the more casual player. Battles move along fairly quickly, you don't have to concern yourself with a lot of tedious resource management, and bite-size warfare with obedient killer robots is better than no warfare at all.

The whole "three strikes" loss penalty will probably frustrate a fair amount of players, since it seems like a fairly vestigial element that just serves to annoy. Though perhaps light on any real deep strategy, it's a fun, quick mashup of genres and a great way to spend some time. After all, who amoung us hasn't longed to respond to, "What have you been doing all afternoon?" by slamming our hands down on our desks, rising out of seats, and hissing, "Saving the whole freaking galaxy, that's what," with a steely glint in our eyes?

I have been waiting patiently for Nerdook's latest creation, and I'm glad I waited! This game, in two words, TOTALLY ROCKS!!! There's a elegance to the game as you balance your offensive mercs with defensive drones, trying to outwit the randomly generated foe that has been placed before you. I rate this game 9/10.

Really great game =D!
One tad bit I don't like is that you can't go back and kill the previous bounties to get more money.
I'm on my last life and last level, but I don't have enough money to hire/exchange/upgrade mercenaries....
This pretty much makes me stranded.
I do wish there was a fast forward button, instead of agonizing when there is no way to win and slowing watching yourself brought to defeat.

I give this one high marks, too. When I sit to play a casual game for five, ten minutes while I eat, then find myself still sitting there an embarrassing amount of time later, that's a good game. The more-or-less turn-based action is great too; you can do other things while you're playing. It reminds me of SteamBirds or Elements in that way.

Just wondering, has anyone else

not been able to go rogue at the end of the game?

I just sit there and click the button over and over, and nothing ever happens...

K, I sympathize with your Kobayashi Maru. Have you tried to

get one of your faster units to open up territory close to your opponents base and then use your defensive turrets offensively; plop them down as close to the enemy base as possible

This strategy worked quite well for me.

Full unit stat disclosure might be nice. Some seem to do reduced damage against certain types and it is not made at all clear exactly which, or why.

Same here, I cannot load another players new rogue army to play. The Load Army button just sits there and nothing happens ? bummer want to play this game more and more and more...

[Loading and exporting armies uses the Kongregate API for that, so if you want to use those features, you'll have to play the game at Kongregate. -Jay]

Don't get your hopes up with the "go rogue" feature on Kongregate.

All it seems to do is allow you to save your current team for other people to play against and rate. Your game ends there.

To have more fun yourself, retire quietly.

I didn't like this game much because the bad guys have widely varying strategies.

Some have small fast units to grab territory quickly.

Some have lots of tanky units with some strikers behind them.

You need different configurations to beat different baddies. However this is NOT easily done since there are no "spare" slots. I have an army of heavies and rocket/snipers but it gets totally destroyed by the turret dropper with quick territory grabbers.
I would have to sell and replace ALL my robots pretty much to be able to counter...which costs a fortune and then Id have the same problem in the next fight.

Since you cant repeat missions for more cash, you get stuck.
Bad game design.

Does anyone have a full list of all units and their description or base stats?