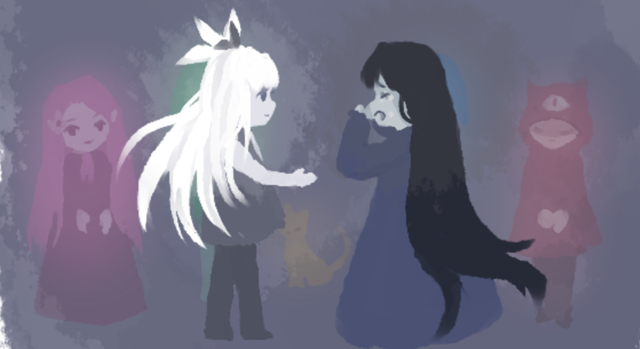 Once upon a time in a land not so far away, there was a King who wore a crown of many different colors, who ruled over the land and its people. The King was benevolent, prosperity abounded, and everyone loved him. But one day someone got a little too jealous for their own good of his crown, an artifact passed down to him by the gods and only befit for one true ruler of the people. A would-be thief intended to steal the crown and use its powers for their own nefarious purposes. Unfortunately, the robber-to-be dropped it in the ensuing chaos and it shattered into a number of pieces that become scattered across the kingdom, ultimately coming into possession by different people. Without its magical powers, the King withered away, along with the color and joy of the land. The princess fled after his death, leaving the kingdom in shambles and no leader. The shards were bartered and grabbed by different humans, harnessed individually for their still great power, but with far less benevolence than the previous wielder of the crown. This leaves one question...who will save these dying lands now?

In Paletta, you play as a small, shy child give guidance by the moon. Although the humans can be cruel, she explains to you, they can also be so very kind. It is only a nudge in the right direction that is sometimes needed for them to do the right thing. That is how the moon explains it to you, one she refers to as her child, before informing you of your mission to gather all the shards. You are given one shard, the light shard, to begin your quest, and send along your way to mingle and gather the others from the humans.

As you gather the shards, you realize they have magical powers that can help you in your quest. The light shard can help bring life to flowers, turning buds into blossoms. You'll see other shards and their powers as well - the power to heal, the power of invisibility, and others. Sometimes guardians will support your cause and hand over custody of their shards, entrusting you without to much runaround. Other times they area a bit more careful, and you must use all of your charm and cunning to prove yourself worthy of their piece of the crown. But with the color of the world bleeding away and the seeds of disorder already having sprouted roots, is playing word games to demonstrate your mettle really the best use of the little time that may be left?

Made as an entry for Indie Game Make Contest 2017, Paletta shines through with effort, blending an RPG element with a thrilling story. There's even a bit of a sidequest involved with seeing how many flowers you can find and bring into blood, even when they "seem dead." But I'll leave more on that for you to discover as you traipse through the storied towns, spring in your step as you encounter both friend and foe. There's even a bit of a hint system in place, with the option to transport away to the moon. Personified, she comes alive as a soft maternal figure, offering advice and kind words if you are stuck, with the odd hint or two. But she's not going to make it a dead giveaway for you either, sometimes offering words that seem more like cryptic clues in need of a bit of imagination and interpretation. You'll also find spirits resting there along with the moon from the previous holders of the shards as you garner them from their respective owners. You can speak briefly with them to see if they have any words of wisdom or tidbits of advice as you continue through your quest.

I greatly enjoyed how Paletta incorporated a number of different mechanics into a game that was still relatively simple and easy to follow. No fantastic reflexes or really underhanded tricks are needed to complete the game, which felt about right for the genre. Yet still, some of the puzzles required some thinking outside the box and careful reasoning that made me think for a while before moving on. The soundtrack is also excellent, with a masterful job of music bouncing around from carefree and innocent to ominous foreshadowing when the game commands you simply to run. The artwork is beautiful, and I would've liked to see a few more full-screen renditions of Pupu's vision. The shards are portrayed as double-edged swords - on the one hand, granting the wielder great power, but on the other, consuming (sometimes literally) their body, soul, and mind along with it.

Movement in Paletta is controlled by the arrow keys, and you can hold down shift to run (though don't forget to smell...and maybe bloom the flowers?). As we've mentioned, the shards grant access to spells as you dig deeper into the story, so you can use [A] to activate/deactivate spells or skip through text. Note that you need to have spells deactivated to chat/interact at certain points, which is a bit of a quirk but not too bad once you get used to it. Pressing [Esc] or [X] exits to the menu or cancels a selection. Finally, you can use [F5] to expand the game to fullscreen and [F6] to adjust the screen size if you prefer a windowed client.

Can you help reunite the kingdom and achieve a happily ever after? It's not going to be easy going by any means, but sometimes tough things come in the smallest packages. And even though humans can be greedy and selfish at times, the ones in the world of Paletta might find it in their hearts to forgive one of the biggest mistakes.

Technical note: In order to play Paletta, you'll need to download and install a different software, VX Ace RTP, which you can find here. This software is a collection of sounds, graphics, and .dll files which are needed for it to run. The developers opted to have it separate to decrease the file size download of their game. Once you download and install it, the game executable file should run without any further issues - but if you see an error message along the lines of "Unable to find VX Ace RTP," this is why."

This game is tagged as "browser" and "flash", but then you say you have to download files? Change the tags, please! Those of us who don't have PCs can't play this, so those need to be taken off.

Thanks for pointing that out; I've removed the browser tag.