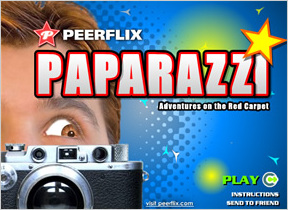 In what could possibly be seen as a game in less than desirable taste, this next one has all the glitz and polish of a real celebrity.

Paparazzi is a humorous picture-taking advergame for DVD trading site Peerflix in which the objective is to snap photos of celebrities to earn money. Yes, I know what you're thinking, but play along, hmm?

The photographer's angry tabloid boss is fed-up with the trash that has been pictured on the covers (aren't we all?). He wants BIG celebrity photos or else the photographer will soon be out of a job. Help the photographer by snapping photos as assigned in each of the five (5) 'adventures on the red carpet.' The better the photo the more money it earns, and you'll need to snap 12 photos and reach the target goal for each scene to move on to the next.

In addition to the monetary goal, there is an inherent risk involved with being a paparazzi: your subjects may not appreciate the photo-op and will often throw things at you. If you get hit five (5) times in a single scene before you snap all 12 photos, it's game over.

Analysis: The game has some strong points, though it's not perfect. I really liked the presentation and appeal of the sparkling graphics with saturated primary colors. The glitzy style works well for the game type and reasonably well for the nature of the client's business. The option to skip ("continue") past intro cut scenes is a very welcome feature, as was the viewable instructions 'tabloid' to leaf through while the game was loading: a very nice touch!

The photo capturing gameplay is well done with lots of random movement of the subjects to keep the game challenging, fresh and fun for a while. That being said, I believe there is room for improvement in the detection algorithm that determines a "good photo." It seems that as long as you capture a majority of the targeted celebrity then you will earn max value for that photo.

The use of a stylized likeness of real celebrities paired with a silly parody of their names injects both humor and fun into an otherwise objectionable activity. Remember, it's only a game. ;)

So, yeah, this sort of thing isn't something that you should aspire to do in real life, as invading others' privacy is not only unethical, it also lowers your karma to the life form of a sponge. Still, the picture-taking genre of games has always appealed to me over those using guns, and I believe there is room for it to be taken in plenty of new and exciting directions.

With apologies to all the celebrities who visit here, including those whose likenesses were used in this game. (I know you're out there ;)

Cheers to Steve for pointing out that this game was designed and developed by his company in Boston, Pod Digital Design, makers of viral marketing and branded entertainment. Nice work, Steve!

hmm . . . not really sure what i think of that game . . . its okay . . . kinda weird though. i couldnt really spend much time playing it. it kinda got on my nerves.

Hmm, that doesn't really say much, Heather. Care to expound on why?

Good game...a little short and once you get the hang of it quite simple. I enjoyed it because it's original but the ending was a little boring...there could have been more I guess. But overall I still enjoyed it!

I thought that this game was a great little distraction. It took me a few tries really to get the hang of it, but the replayability of the game was such that I didn't mind. I thought that the inclusion of different values for different photo contexts was really well done, as well; for instance:

Snapping a shot of the likenesses of Brad Pitt and Angelina Jolie simply together gets you $3000, yet, if they're really close to one another, you'll get $6000 (at least I think that's how it works).

...it really was as "twistofreality" put it "a nice litle distraction. I haven't been able to get past

yet, but the prospect of getting some shots of

will have me coming back for more!!

Also, I didn't notice because of how little time I had to play today (heading off to work), but does the game have a "shut off" feature for the music? I could see that getting annoying quickly!! I'll notice when I play again tomorrow.

Nope. Tis yet another game without an audio control. [sigh]

I think Macrodobe ought to include an audio control in the right-click context menu as a standard feature in the next Flash Player.

Hey! A favicon for jayis. The game is alright. I kind of like how the faces are pieced together. Makes you feel like the stars just paste different popular features together in real life.

But, what about Peerflix? It seemed interesting. Is there any chance someone here has tried it?

I personally thought that this game was great. The scrambled face graphics of the celebrities was pretty much brilliant (along with the likeness of the names) and I thought it was an all-around fun, challenging game.

I've been "stalking" this site for quite some while now, so thanks again Jay! :)

Peedl - no idea about Peerflix. Sounds interesting, though I don't have a very large DVD collection to make it worth my while (any DVDs I do own I am not getting rid of anytime soon).

i got up to brad pitt and angelina jolie. this game was a bit boring though. love your site, jay!

You'll get $8000 for a picture of Jelly and Pitts really close together.

Taking pictures of Jacko isn't really that difficult. It just takes some patience: the guy's obviously hyperactive and has serious problems standing still long enough for you to take a picture of him :7 But once you've gotten past him, the rest are a piece of cake. The ending was a bit of a disappointment, though.

The Celebritologist scheme didn't turn out to be half as diabolic as I had expected it to be :7

Brad and Frangelina mooned me .. and i took a picture .. but didnt get any points for it ...
you would think that it would be at least a thousand or something ... its a "celebritys" butt .. come on!

Wow! This was a lot of fun! Definitely a better distraction than the usual shoot-em-ups.

How do you get past the Jackson Micheals level? I keep taking pictures of him with his mask and I keep getting beat up.

I have completed it it's EASY

Hey did you know that...

Just a heads up, this link is broken.

They may be just moving the content. I'll keep an eye on this and remove it from the recommended section and post another note here if the game has been taken offline for good. I've also emailed the developer for an alternative link, so hopefully this will be resolved soon.

The links are fixed, and the game is back!

I think it is a great game.. too easy for me now though. i finished it with so much in only 5 minutes! please never get rid of this link! its so hard to find this game now!

did you notice something disturbing about the two people in the car? (im not keeing track of the names)

I entered the game and there was no page, it says that the page has expired.