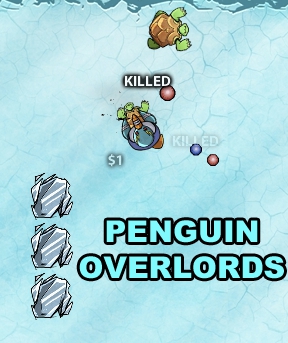 Maybe we should start off with what Penguin Overlords isn't, in case you for one are ready to welcome them. This is not a game about the Spheniscidae aristocracy tramping its collective webbed foot upon the downtrodden. This is a game where turtles are evil. And can hide under the ground sometimes. And also carry military-grade weapons on the backs of their shells. Look, turtles bad, penguins good, alright? You've got to upgrade la resistance manchot if you're going to stand a chance. Say by hacking off the beak and replacing it with a zombie beak. And then watching from a topdown perspective while the penguin/turtle throwdown commences. Why are you looking at me like that? Blame the developer, Christopher Gregorio.

You start off on ice, which is rather natural for penguins, but soon enough you'll be sending your rampaging army into the jungle and beyond. During the actual battle screens, you can't do anything at first except mouse around to pick up money that is dropped by dead turtles. Eventually you'll earn enough to buy upgrades to do things like provide a health boost to your penguin soldiers or even get in the fray personally by dropping a bomb. But even at max upgrade level your ability to participate is rather limited. Instead, it's all about the upgrades. Spend your money wisely in the shop, and soon you'll be picking bits of shell out of your teeth.

Like many upgrade-centric games, there's a certain detachment in the playing experience here. It's not like the worst grinding games where you can pretty much flip over to another window and the game plays itself, but emotionally there's still a certain amount of feeling like you're watching the game rather than playing it during battle sequences. This almost gives the game more of a simulation feel rather than an action shooter.

However, there's something to be said for being the general sometimes rather than the footsoldier. Actually in Penguin Overlords, it's more like being the Secretary of Acquisitions and Spending. It would have been nice if there was a bit more strategy involved in equipping the penguins (the equipment upgrades are linear improvements), but there is definite strategy in choosing what order to buy things in. Plus, you know, penguins are better than turtles. That's just fact.

Interesting game, actually. If the turtles healed the penguins a bit more this would play a lot like those chain reaction / zombie infection games.

As it is, the best upgrade by far seems to be the "bonus penguin". It's insanely good for the price.

Bombs are probably best used for when the stupid penguins get stuck on the terrain -- just blow up whatever is causing their pathfinding to flunk.

I didn't like the tutorial at the beginning, it was just a little obtrusive.

But the game itself is really good, and I especially like the Kingdom Hearts remix for the background music.