This title is available in Pay What You Want format, including free. If you enjoy this game, please consider paying the developer what you think it's worth!

"I will pay any ship a large sum to kill that beast," said Captain Ahab in a slow monotone, gazing out the window. "The beast that killed my daughter." But that beast is actually the protagonist here, so it's... standing right behind you, Ahab! From Bearmancer, the developer who didn't bring you the first-person shooter version of Little Women, comes this must-play arcadified action RPG take on Herman Melville's American lit classic about a giant sperm whale who played by his own rules and a sea captain who couldn't get enough of him. You're splashing around crashing into ships like sushi boats, yet this time around there's plenty of innovation. Mobias is amassing enough soul energy through his capsized conquests to become an immortal ocean god, complete with upgradable skills and boatloads of special abilities. Narwal horn, huge bouncing saws, freeze and rage fields, spawning rocky spikes on splashes, head-mounted leviathan laser beams, life stealing and oodles more? Plus steampunk Tesla bots and ships that condense beams of pure sunlight at you? Yup, pretty sure this is canon. Pequod is for an American classic what Dance Dance Revolution is to the waltz and the lindsey, and you're gonnna love it. We can classic lit, and so can you! 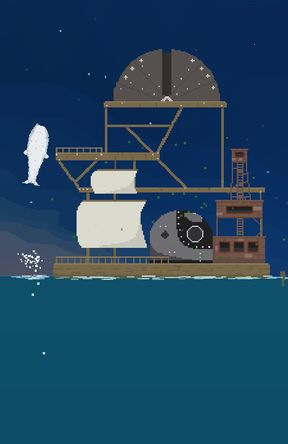 Guide Mobias using the [arrows] or [WASD], and select from options with the [spacebar]. There's a useful minimap at the upper-right that will show you where boats and subs are, as well as chests, idols and barrels. You might want to start out your games nabbing generic barrels which may or may not contain skill boost points, but once you get a feel for it you may want to make the gold and silver noble ships your first priority. Unlike all the other ships they won't shoot back and they'll always drop some type of treasure chest with a special ability or skill boosts in, but once they've left the area they're gone for good. Each game will start with a major chest on the ocean floor, and it will contain an unpredictable special ability. There are also densely-mined areas to navigate carefully for a few skill point barrels, each with a symbol corresponding to a stat depicted on your display at the upper-right. Like some nicely-demented version of a childrens' cereal these are: Damage [Anchors], Magic Damage [Purple Orbs], Luck [Clovers], Speed [Whale Tails] and Madness [Nero Crosses]. Madness is the currency with which you can purchase specific boosts from shopkeeps — the selection and prices vary from level to level — and you can also donate Hearts and Madness to idols, if any, for unspecified stat boosts. At the lower-left is a black meter that fills with soul energies as you take out ships — which thoughtfully flash black and red to indicate that they're about to loose a volley of something at you — and topping up your soul energies means you're ready to take on the stage's boss ship. A success there will garner you another special ability chest and likely a few stat boosts as well in addition to advancing you to the next stage. Between stages flavor text will appear to give you a better sense of Pequod's exotic in-game world, and the specific text you get will vary based on how long it took you to complete the stage. 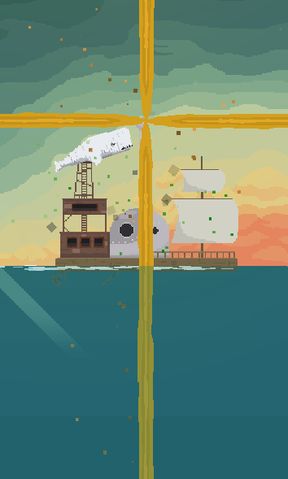 Pequod's a title with plenty of replay value to it, because each game is wildly different based on the skills and random special abilities you nab. You'll play several times getting an 'eh' accumulation or die almost immediately, and keep playing for those few golden playthroughs where you get plenty of your favorite abilities combined and stacked together, and have your own moves down as well, for some massively unstoppable successes and shining, memorable gaming moments. At the bottom of the screen icons for each special ability you've aquired are displayed, and did we mention these special abilities stack? They stack. Oh boy, do they stack! Not that all special abilities you get are necessarily ones you'd actually prefer to keep. For example Teleglitch has a Luck-dependent chance of teleporting you elsewhere on the map when you'd otherwise take damage, something which itself can be inconvenient and downright disorienting enough to cause you to take even more damage while you're getting your bearings. There's also an ability that temporarily slows down ships and projectiles coming at you, which isn't quite the boon you might expect it to be. Maneuvering to avoid damage in a frenetic environment can be tough enough without everything shifting tempo around you, and then shifting back while you're mid-maneuver. Other abilities, such as life stealing to regenerate hit points and Wet Gunpowder, which decreases the frequency at which ships launch their vollies at you, are pure delight especially when you've amassed plenty of Luck or managed to stack a few different instances of them. While Pequod is paywhatyouwant, including free, we're confident that after a bit of play most players will surely want to chip in a little to encourage this developer's behavior and efforts. Titles this creative don't come along that often, and Bearmancer has managed to reinterpret the theme of doom for which the Pequod was named into a just-one-more-game arcade success. We'd love to see it developed with even more content into a bigger game, and think it likely to become very successful as a Steam release. Either way, Bearmancer has established himself as one to watch and we can't wait to see what comes next!

Windows:
Get the full version(Pay What You Want, including free)

Mac OS X:
Get the full version (Pay What You Want, including free)

I liked the game.

The graphics are ok and the opponents pattern of attacks is varied enough to force you to change your tactics when fighting the different "races" of ships.

The upgrade part is nice, useful and hard to get, the different powers you get change your playstyle (shooting beams from below or jumping out of the sea so that you create a huge temporary rock peak ? hitting ennemies with your narval horn or circling around them waiting for your orbital bomb or your thunder to hit them ?)

I appreciate the little bits of flavor text between each scene, they are short, sober, just enough to get a feeling of loneliness and madness slowly growing.

But I'd like the game to give more informations about Mobias, about the weird idols at the bottom of the see. The lore is a bit lacking, even for such a simple and short game.

It's a cool idea, and I love me some upgrade games. The controls, however, I think are pretty bad. I was wishing that R/L would make Mobias turn right and left, not point him in that direction. And that up/down was forward/slow instead of, well, up and down.