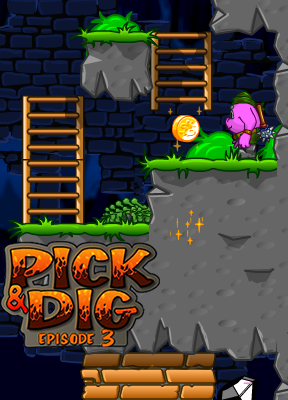 The marshmellow-ish hero of Pick and Dig 3 may dress in camo and combat boots and carry a mace on his back, but his athletic abilities are weirdly selective. Without his inability to jump, especially, the puzzles in this platformer would be a lot easier. If the guy actually used that mace he's lugging around, there'd be no need to pick up shovels, picks, and ladders either. Maybe he's setting himself some kind of "snatch the pebble from my hand" mind over matter challenge.

Wander around a level with the [arrow] keys and use [ZXC] to apply a tool you've picked up. Each level features three gold coins and one gigantic gem. The gem is just for bragging rights; the coins are used to buy three upgrades in the shop: the ability to grab ladders from below, the ability to hang onto ledges, and the ability to shimmy up between two walls. The levels in this game are nonlinear, and unlock based on how many you've completed and your own ability to maneuver around the level select screen, so if you get stuck on one level, you can always try some others to get coins to upgrade. Harder levels introduce enemies, who add an element of timing challenge, and environmental hazards like lava. There's often a way to at least grab one or two coins and exit, too, so frustration levels are kept low and fun is maximized. Inexplicable handicaps for the win!

FYI: I found that getting the "ladder grab" upgrade before the "ledge grab" can lead to a situation where you can't proceed.

Fortunately, there exists a workaround: return to the main menu and reset progress.

As a bonus, resetting progress does NOT reset the store, so getting coins (and gems) is a breeze :P

Grabbing ladders from below is an upgrade right? Well, I upgraded but then thought I'd reset my progress. After reloading the game I chose another upgrade but, guess what, I can still do the grabby thing.

it's making life a lot easier!

Getting the "ledge grab" before the "ladder grab" also leads to a spot where progress is frozen. Thank goodness for the reset progress feature.

How can it be possible for progress to be frozen in both directions? I tested the ladder grab out after beating the game and it does look like you can't go anywhere since there is only one level open and it can't be beaten without the ledge grab. But getting the ledge grab first should certainly make it possible to get another 10 coins to buy the ladder upgrade. I think you just missed something.

I finished the game, and began with the ledge grab. I expect if folks began there and are stuck, they may need to revisit caves or make sure a new one has not opened.

I enjoyed this! I like platformers that rely mostly on puzzles rather than timing and reflex. This was just my speed.

Definitely. I completed the game by getting the ledge grab first, and successfully found 10 more coins before reaching any sort of road-block.

This is a great little game! I wonder if it's worth tracking down the earlier entries in the series.

Only one little nit-pick: no feedback whatsoever for finding all gems and coins? (And if you press 'start game' after you've found all gems and coins, it starts you by the exit of the last level you completed; exiting jumps you back to the menu.)

Fun little game, just the right amount of challenge. I too opted for the ladder grab before the ledge grab, and was a little miffed that I had to reset my progress. The designer should have set the upgrades so that you could only buy them in a certain order, would save many of us from "giving up" on the game and then realizing that we still had the purchased ability.

I also thought this was a great little puzzle game, I chose the ladder grab upgrade as well first, and still finished the game entirely without resetting. It's a bit outside of the box thinking, but doable none the less. I believe the other upgrade would be easier initially, but the end levels are fairly simple regardless...

I liked everything but the worms.

I hit the bug that everyone mentioned, but when I reopened my browser, I had lost my initial upgrade, so I guess it stays only on that session. Fun game, though. One the very few that I played through fully.

How do you solve the last level? I end up getting killed by the worm guarding the last key. Please help!! Thanks!

@Peter, Since I can't open the game and go to the level again, I'll have to answer from memory. IIRC, you're either talking about the work that's on top of the key on the single square ledge, or the one who drops from the ceiling at the very top. The trick to the one on the ledge is to just drop down next to him, and then build a ladder. Giving him someplace else to crawl gives you access to the key. If you're talking about the one on the ceiling, he'll always run to the right once he falls, just follow him and then shovel down at the right spot.

Again, doing this from memory, I could be wrong. Budget your ladders and make sure to set them up wisely, there is only one solution that I found.

I began with the ledge grab. That's not a problem as 10 more coins can be found without the ladder grab but with a little perseverance.

Then again, I haven't finished yet - I still have to tackle the final three levels and haven't managed to escape with the right hand coin in the level immediately up and right from the shop. Unfortunately I can't cheat as the only walkthrough I've found doesn't get as far as that coin either so I'll just have to keep trying.

A great little game that's made for a relaxing evening.

I wish there was a "no worm" option or at least a way to kill them!

I wish there was a "no worm" option or at least a way to kill them!

How do you reset progress? I can't find that option.

There is one level where a coin is suspended above a deadly fire pit. There is a collapsible box next to the coin. I can't figure out how to snag the coin without getting killed by the fire. My miner has all the abilities. Can anybody help? Thx.

You only need the ledge cling ability. Use the ledge by the lava pit instead of the box to climb to the top green ledge, the one over the box.

Let yourself down from it so that you grab the edge of the box, snagging the coin. Then run across the box and proceed with the level.

You only need the ledge cling ability. Use the ledge by the lava pit instead of the box to climb to the top green ledge, the one over the box.

Let yourself down from it so that you grab the edge of the box, snagging the coin. Then run across the box and proceed with the level.

In first cave at top of longest ladder... how do you get past worm after picking up 2nd key? Totally stuck. Thanks for help.

Anyone having difficulty "turning around" on the cliff? If I get to close, my character backs away, if I go to far he drowns in lava (*tear*). Do you have to have a special ability for this level?

Monica - You just need to practise the controls more. They are a little touchy.

Emme: I have it. You need to follow right behind the worm and dig down when he's on top of the box. There's JUST enough time.

I can't seem to beat the very last level! I run out of latters every time! I was stuck with the 3rd to last level for a while but figured out the "dig RIGHT after Caterpillar falls" thing and the 2nd to last level was a breeze but this every last one is killing me!