Japika's arena-style action-packed game Pijaka Blast 3D is one of those things you might simply describe as weird, but cool. ... maybe more than a little weird, since it stars some sort of freaky bomb-flinging skull-faced monkey creature that must fend off wave after wave of enemies as she blasts her way down through a destructible floating island to defeat the boss and find a way back home. It sounds like the sort of idea you'd get by throwing mad-lib magnets at a fridge and seeing what sticks, but the result is pure chaotic fun... mostly. 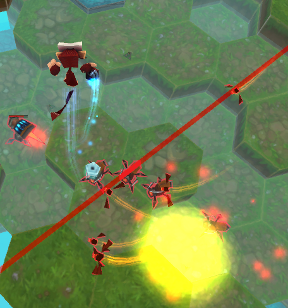 Move using [WASD], jump with [spacebar], and use the mouse to aim and shoot, with either right-click or the [1] to [4] keys to cycle through your weapons. You have an infinite amount of "ammo" for each weapon, but each also has its own cooldown timer, from your simple default bomb to toss to a temporary Tesla tower that will zap anything that comes near. Enemies will appear in waves and attack as enemies do, and as you destroy them you'll earn experience points to level up, which both replenishes your health, and grants you skill points (as does completing objective/achievement based "quests") you can spend on upgrades the next time you die. And you will likely die, since you'll find it more than a little difficult (or impossible) to get to the bottom in the first go.

Pijaka Blast 3D is one of those games that's both a lot of fun, but one I wish I'd been around to give feedback during development time. The premise is great, a sort of old-school arcade cabinet feel and execution to its gameplay along with decidedly new-school style 3D visuals. What's not so great is the forced grinding, since you can only upgrade when you die, and you have to start all the way over from the very beginning when you start up again. The problem is that most of the upgrades, including those that force you to be a certain level before applying them, increment at such small amounts as to make you feel like you're chipping away at an enormous boulder with a sharpened toothbrush. Pijaka's limited arsenal forces you to really learn to think strategically as the types (and numbers) of enemies increase, and the tiered bonuses in the upgrades, such as the double-jump, help a lot. The whole thing has a gleefully zany vibe that makes it the sort of game that not only makes for a perfect break-sized escape, but also something you can play a lot longer without realising. It's a little rough around the edges, especially where its translation is concerned, but it's still an enjoyable, fast-paced challenge with a unique style worth checking out.

Good game, but your are right about it being grindy. I didn't know there was a level cap and once I hit it it really was a struggle to get pass some of the harder quest to get more skill points. It would have been helpful to change the order if you really got stuck on one or 2.

Also the boss really is a pain too as it got to the point of I couldn't keep track of all the missiles he was sending out to blow them up while focusing on the him. You really don't have much time to focus on him with all the enemies laser tower respawning.