Emma was there at the source of the tragedy: Aramond Hospital. It was located smack-dab in the center of the city, and yet its reputation kept it isolated from the traffic of everyday life. Rumors of undead creatures wandering the grounds and a secret research lab run by individuals with a rather loose policy when it came to acquiring human subjects were enough to steer the curious away. But whatever experimentation went on within its walls has seemed to bear fruit. Emma's source has told her that the Immortality Serum could be found within, and find it, she must. But she had no idea what she would encounter... Pillow City Zero is a horror adventure game by Little Giant World and Small Farm Studio that serves as a semi-prequel to 2014's Pillow City Revelation. 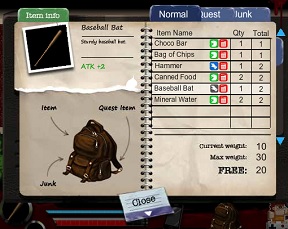 Walk around the hospital with the [A/D] keys, crouching with [S]. To examine an object, point the mouse cursor over it and use [E]. Oftentimes, this will lead to a sub-menu which will allow you to take useful items (and quite a bit of junk) and add them to your inventory. You have limited space in your inventory, so if you want to use/equip an item, consume food, or even just ditch things for more room, you can click your backpack at the bottom of the screen. Also there is your cellphone, which will update with your current mission objectives. Attack enemies by clicking them, taking note of both your health and stamina meters. Attacking or running by holding [shift] will deplete your stamina, though it regains over time. You can save your game by visiting "Guest" Rooms. Stay safe, stay vigilant, and find that serum! A lot of elements of Pillow City Zero will be familiar to those who've played The Last Stand: Union City and Resident Evil. But while its inspirations are altogether much less clunky in execution than Pillow City Zero, the game itself is not without its charms. Yes, zombies, creepy hospitals, awkward controls and extremely questionable grammar have all been seen before. However, the developers have clearly put in a lot of effort in realizing their game world and if the gameplay results are unrefined, at least it puts forth an interesting story with a handful of genuinely creepy moments. And, it should be mentioned, the undead monsters of Pillow City Zero give a very satisfying growl when you clomp them upside the head with a frying pan. I really don't know what else you need.

This might be a fun game if the controls actually worked. Very sporadic. Oh well.