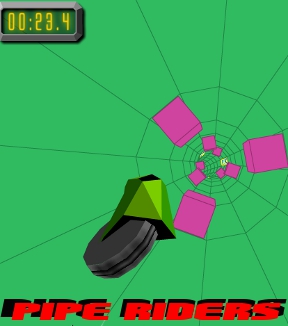 [Please note that this game may cause motion-sickness in certain individuals.] Quick, pretend you're in an episode of Wayne's World! Wooooooaaaaah! Wooooooooooooaaaaaaahhhh! Why? 'Cause that's how you're going to feel when you fire up Oslo Albet's 3D avoidance racing game, Pipe Riders! Combining the crazy, tilty, swinging fun of an early Sonic game Bonus Stage with simple, breezy, arcade gameplay, it's a bouncy retro ride down memory lane. After selecting a difficulty and a race from the 32 available levels, just use the [arrow] keys to move around and speed up or slow down. Your goal is to reach the finish line as quickly as possible, naturally, avoiding the various obstacles littering the raceway and grab the green(ish) cubes to replenish your shield if you've been taking damage. Grabbing a green cube when your shield is full gives you a time bonus, so don't ignore them even if you're an avoidance pro! As you progress, keep an eye out for special pads that'll give you a boost of speed if you drive over them. Just completing a race is enough to unlock the next, but if you want those gleaming medals you'll need to work hard to shave precious seconds off your time.

Pipe Riders is a lot of fun, but it might be a bit too simple, and feels like it needs some fleshing out to really be a champion all its own. Split-screen multiplayer would seem like the logical step for competitive play, but even allowing us to save our races for other players to challenge our "ghosts" in a la Hell is Other People would have been great too. Unless you're motivated by high scores and medals, and not everyone is, there aren't a whole lot of reasons to go back and replay earlier levels. But if you shun the company of other players, or just enjoy the thrill that comes at hurtling at irresponsible speeds down a course peppered with things to smash into, Pipe Riders is still a solid, fast-paced way to pass the time. It's also a fairly accurate representation of how I play Grand Theft Auto, but with less screaming and bone-crunching thuds.

You know, a little more effort, detail, variation, etc., and this would have been a lot like S.T.U.N Runner, that old arcade game.

I'm only at the 5th level and I have no real chance for gold medals, but I love this one!

I had a feeling that my previous comment would get deleted, no matter how G rated I phrased it. Sigh.

Does anyone else instinctively try to time hitting the accelerator with the green light on every racing game thanks to Mario Kart? I can never really tell if it gives me a boost, but I like to think it does.

Oh, and this game is really fun, even though I have no expectations of getting anything higher than an occasional silver.

Awesome game! :D
It would make more sense (IMO) if the throttle was on by default, without having to press 'up'. Because usually we want to go as fast as possible and only occasionally break (maybe with 'down' key?).. so we end up with a tired finger and a worn out 'up' key :P

I've found a bug: I got destroyed near the finish line so the 'try again' menu showed up, but behind it the bike still moves a little before the screen turns black, making my bike reach the finish line. This caused the "you've finished" menu to show up behind the current menu! So I clicked to go to the main menu and two samples of the same music started playing at the same time.

Seems like it's really easy to get into the hang of playing Survival mode. On Normal difficulty and the green track (which would probably be the first set-up anyone tries), I had a run last well over 10 minutes. The only reason the game ended was because I decided to let it go without my input.

BuenoCabra... it does have a boost if you time it perfectly, although it seems to have to be even more precise than Mario Kart. You'll know you got it when the track flashes white and you fly forward, like when you drive over a boost panel.

I thought so, since I shot up over 300 at the start a couple of times. Thanks for the confirmation! :)