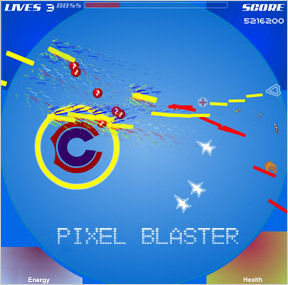 Pixel Blaster is a simple and stylish flash-based shooter by Tom Thornton of ThorGaming. Waves of stark white ships appear in the circular playing field and attack your vessel. With a remarkably useful charge shot and two-handed controls, you must fend off dozens of enemies before plunging into an intense boss battle. The game is vaguely reminiscent of GridWars but places a stronger emphasis on physics and old fashioned ship blasting rather than overwhelming you with dozens of enemies at once.

The game's structure is very basic but sets the pace for the game quite well. Enemies come at you in waves, each one containing a set of ships that must be defeated in order to move on. Once you dispatch them you'll battle the boss, a large vessel with several layers of shielding. Afterwards you move onto more sets of enemies, but this time they're stronger, faster and more difficult to defeat.

To control your ship use the arrow keys (or WASD) to move and the mouse to aim and fire your weapon. It takes some time to get accustomed to the dual control style, but once you do it becomes second nature. A more powerful charge shot is available if you hold the left mouse button for a few seconds. Unleash it and continue to fire your weapon for a series of power shots that will destroy almost anything in their path. It's especially useful (and dramatic) during boss battles.

Pixel Blaster has a lot of little extras that make the game extraordinarily entertaining. For starters, an online high score board keeps track of the top 100 players in each difficulty level, giving you a shot at the limelight. Physics also play a subtle but important role in the game, causing your ship to drift every time you move and forcing you to adjust for shifting weapons fire. My personal favorite feature is the shaking screen whenever something explodes. It makes the game feel a bit more intense.

Pixel Blaster is a simple shooter that's a winner for its clean style, superb implementation and well-paced gameplay. It's a tough game to stop playing once you start, so consider yourself warned.

Has anyone been able to beat the boss?

When I have more time, I'll play it more.

(Didn't realize there was charged shot for a long time.. :p)

I beat the first boss, but didn't get far enough to see if there's more than that.

And I'm surprise John didn't mention how similar this one is to the previously reviewed Pod Panic. In fact the ship in Pod Panic resembles the Boss in this game. What I liked about Pod Panic was that I could use the WASD keys instead of the arrow keys, which is more comfortable to me when my left hand is on the mouse.

I'm not a big fan of double-control games. Maybe I just lack coordination, but for some reason it doesn't seem intuitive to me.

As for the WASD keys, this games lets you use them as well...

Ah, now this is what a shump game should be like, not like the horribly repetive game you reviewed yesterday. Good find, Jay.

I got to the second boss, but that was only by circling the whole game field and firing in the rough direction of the enemy ships.

I don't understand how the power gun should be used. If I click the other mouse button I get the Flash setting menu as well and it is very annoying. The power gun is also quite unpredictable. Does anyone know is there some logic how it works? Do I need to have some energy charged before it works or what?

Hold the left mouse button to charge your lazer, release to fire, holding the button down for long periods will use more energy. Once the shot has been fired it will constantly lose its charge, sometimes your shots will not make it through a whole line of enemies as it is no longer powerful enough.

Try out pixel blaster micro on my site for a slightly tweaked experience.

hey a awsome game and a awsome site !!!!!come here each and every day. always something new thats actually quality!! I think it is imposseble to beat the boss without power blast. i didn`t know about it and carried on for 15 mins witout beating the first boss !!

Thanks Tom :)
I was a bit confused since I use the mouse with my left hand. I am usually a right-hander but on a computer I have changed to lefty because it's more ergonomic when you use full keyboard.

Btw, I managed to defeat the first two bosses but then the game halted. Or actually only one of the enemies got stucked. I couldn't shoot it and it just did nothing. Maybe a bug?

This game is AWESOME.

Worked perfectly, until one of the bosses finally took me out.

I got stuck about level 20, with one unmoving, unshootable enemy. I could push him around, though, which was fun for a few minutes. Anybody else have this problem?

I had the same glitch with the unshootable enemy, before the second boss.

Wow. This is an incredibly addictive game. I've been playing for a few days now and I can't stop. I got to Wave 55 and I had 2 lives left but I had to quit due to finger pain.

A fun thing to do with a friend is to have one person steer and one person shoot. I did that and it was incredibly fun.

This game is realy boring, "c'est chiant quoi", it's impossible to control the ship correctly (enfin, it's maybe because i'm a little bit drunk...)

I guess I need a faster computer because it gets really laggy in the later levels when you charge up the power gun and really let loose!

Lost my first life at the same time as killing the 4th boss... on a touchpad first attempt. Seemed to be fairly fun, but got a bit repetitive.

JAY- There's tons of bosses, at least ten. That's really as far as you got? I got a little past level 50. Maybe I actually found something I'm good at. :)
-MANAX

when you shoot the power gun, charge to full, release, and DON'T STOP FIRING! The bullets continue to be large, and it takes minimal power.

i just get a 404 error. alot of things arent working for me around here.

Thanks, hampster! They moved the game >:(

The links should be all fixed now. :)