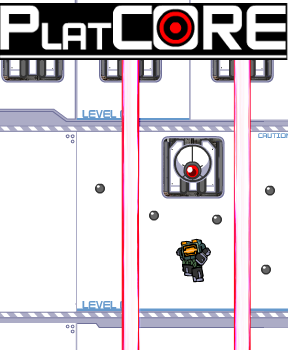 There's a certain point in some games where you feel like you've reached "the zone"... achieving what seems like superhuman speed and skill, pulling off stunts that you can't believe you managed, having people laugh at you because you're staring slack-jawed at the screen while playing and so on. Platcore, a new action avoidance game by Chris Jeffries, pushes you to achieve this by threatening to destroy you with lasers, guns and the laws of physics. These are surprisingly good motivators, as it turns out!

Run around with either the [WASD] or [arrow] keys, using the top key of each control setup to jump and the bottom key to crouch and slide. You also have a limited-use shield that you can activate with the [A] key which renders you invincible but is only recharged between levels. Your goal is to keep your little Platbot alive amidst a barrage of unpleasantness, including lasers in many varieties, guns in many varieties and smashy things in one especially painful variety. Taking hits reduces your health, being smashed kills you instantly and dying leads to you using a different Platbot. Levels tend to last around five minutes each and progression leads to nastier traps and avoidance-based boss battles.

There are also golden cogs raining from the sky to grab; these grant experience which represents your time with a particular 'bot and currency which can be spent cosmetic upgrades you can puruchase between levels. These cosmetic upgrades add a surprising amount to the game. A customized Platbot is easier to get attached to than a random 'bot thrown at you after a death and you're more likely to go the distance with something you built yourself. Your fancy 'bot is gone if you die, after all, and what's the fun in piloting something from the randomized scrap heap?

While it can be frustrating, particularly if you lose a favorite 'bot to some smashers, Platcore's addictive gameplay is simple, snappy and satisfying. The addition of new traps and boss battles as you proceed through the stages help keep things fresh, and while each individual level may be long this only serves to add to the tension and desperation that powers the game. Platcore is definitely worth a look for action and avoidance fans.

How do I use the upgrade labs? Everything seems locked, and nothing does anything when I click on it.

@Sylocat: Each part needs to be purchased individually. Stand in the middle of the room, hit Space to begin customizing, then use the arrows to scroll through parts, then click "Purchase Item" to buy a part and "Apply" to rebuild your Platbot with it.

Sadly, I haven't come across any parts that seem to give any performance increase. Looks like they're aesthetic-only.