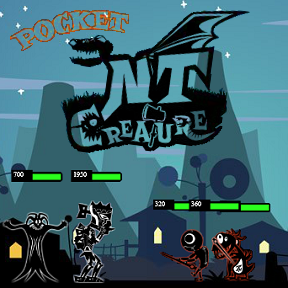 Help, help! The kingdom is being repressed! And what better way to overthrow the tyrannical King than by building a Pocket Creature army? Well, there might be better ways, but this is the way you're going to do it! Hire, raise, and evolve a team of monsters to fight your way up to the battle royale in this strategy game by NTFusion.

Start by purchasing a squad of adolescent Spirits, Puppets, Dragons, or the Undead in the shop, then switch to the team menu where you can swap up to 4 monsters into the team or feed your baby creatures to reach higher levels. After gaining a new level, you can evolve your creature into an even stronger, and often spookier-looking, form. With four creature types and seven evolutions per type, that's up to 28 possible monsters under your control! When you have a fighting group ready to go, simply click an available mission on the map to wage your first battle.

When it comes time brawl, it's up to little more than good strategy and a bit of luck to ensure a win. Because of the unique leveling tree, bigger monsters aren't necessarily better. Knowing your enemy is key, and arranging a team that can excel at certain battle types can make all the difference between victory or defeat. With a balance of status attributes and creatures that can heal, deal big damage numbers, take hits, support the team with unique abilities, or attack from a safe distance, you won't ever be at a loss of variety when it's time to plan your attack. Achieving a high grade after battles will earn you piles of gold to upgrade to an even stronger team, which will quickly become a necessity when that difficulty curve starts to rise.

The simple but appealing visuals add a touch of flair with haunting sceneries and character models that range from kooky to downright creepy. While there's a lot to enjoy here, there are also a few causes for frustration. Without any option to skip or speed up matches, it can sometimes be tedious waiting for a battle to finish. It's a shame that the monster abilities are all passive, and it's hard not to think of it as a lost opportunity to allow the player some involvement during combat. However, there is some benefit to taking time to observe battles, as it gives you a chance to compare how certain fighting styles perform against different enemies. Whether your army is built on cunning tactics or brute force, you'll soon find a favorite go-to team of creatures that's sure to leave the oppressive King shaking in his boots. So, come! Come and see the violence inherent in the system!

This was a fun game, much more enjoyable than the last iteration of this system. After some experimentation, here's the team I found that could get through endless:

The Shadow Dragons pump out great damage and constant minor knockback, while the Blade Spirits' self-heal is stronger than the heals of any other unit. Knockback is their only weakness, but with 2 of them, you should be fine.

That's very close to the team I picked too! It took me forever to realize

What glass cannons those Shadow Dragons are! In the place of one of your Blade Spirits, I used the Scarface to tank and aoe heal any ranged attacks that made it back to the dragons.

During the campaign mode, I used

Scarface/Shadow Dragon/Soul/Entropy Alien combo and literally breezed through an S rank on every level up to the King.

2xShadow Dragons 1xBlade Spirit 1xEntropy Alien I found that the shadow dragons were strong in attack but weak defensively and if I lost them, the fight was over. Entropy Aliens give me a +40 to my entire group it kept my dragons alive. I just rode the timer until the end.

I used: Shadow Dragon, Souleater, Scarface, Scarface. Scarface is better then Entropy because its only 15 less health per sec and it gives you another tank.

and for my Endless:

I used: shadow Dragon, Shadow Dragon, Blade Spirit, and the (S) King. I just kept reseting till the King got the blade spirit passive. He could do it by himself haha.

Since you don't actually do anything during the fighting, how do you "arrange" a team?

"Arrange" means in this context to organize, to prepare, or to make plans for - and that's what this game is all about! While you may not be the one swinging the sword in battle, it's your choice of team builds that decides the outcome.

Just have a look at the other comments for some great examples :)

which one is the blade spirit? I can't find it.

The Blade is the 5th creature in the Spirit tree. You can get a Blade by evolving a Variant into a Star spirit, and then evolving the Star spirit into the Blade.

While it's called the Blade in the evolution tree and at the team menu, for some reason during the species selection, it's referred to as the "Frost Spirit".

hey guys I used an other team...