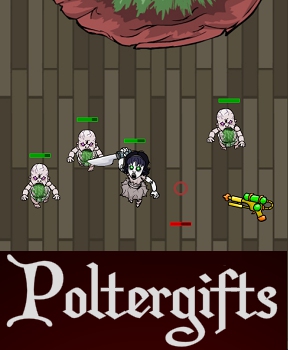 Since Halloween and Christmas are the holidays with the strongest themes, it seems only natural that so many have attempted to combine the two. There's something inherently appealing about subverting the jolly with the scary or, for that matter, the spooky with the sweet. It's a tradition that goes back at least as far as Ebeneezer Scrooge's ghostly visitors. Sometimes the mesh works excellently (i.e. The Nightmare Before Christmas or Gremlins) and sometimes... not (i.e. Jack Frost or the John Waters-endorsed Christmas Evil.) I'm happy to say that Poltergifts, the new semi-first person defense shooter release from Evil-Dog and Sick Death Fiend falls into the "excellent" box.

Tis the night before Christmas, and all through the house, not a creature is stirring, save for the hordes of demon-possessed toys that have found their way under the tree, ready to devour the sleeping bodies of Mom, Dad, and little Timmy. The only thing that stands in their way is you, your hammer and lots of tacks, a ball, a whip that cracks, and a plethora of other gift-weapons. It's six hours until sunrise, with waves of toys coming every ten minutes... as Tiny Tim would say, God help us, all of us.

Use the mouse to unwrap gifts by clicking them, and pick up weapons and traps. Click the mouse to use your current weapon on an approaching baddie, holding the button to attack continuously. Do note that due to poor construction, all the weapons have a limited number of attacks in them, though upgrades can be purchased between waves to make the weapons stronger and sturdier. Hit the [shift] key to grab an item that might be slightly blocked by an enemy, and press the [spacebar] to discard your current weapon. In addition to the standard "wave" mode, there is also a survival mode and a bowling mode available for play.

Analysis: Stylistically, Poltergifts is near-perfect. Right from Antfish's opening narration, a tone is set that is clearly "holiday" while also clearly being "horror". The tropes of "staying up Christmas night" and "fighting zombies until dawn" makes such a natural fit in combination that I'm surprised that it hasn't been invoked before The designs for the malevolent toys are equal parts scary and darkly humorous, and range from the expected-yet-effective (creepy knife-wielding dolls), to ones I found quite creative (saw-blade wielding Hot Wheels/demonic rubber balls). Though I wished later levels introduced a few more new enemies, rather than stronger re-colors of earlier ones, the fact that each one had a personalized "killing blow" animation was a nice touch. While these animations are surprisingly light on the gore, that just serves to make them all the more terrifying (though they do get old the 15th or so time you see them). The semi-first person perspective adds to this horror: you really feel like these little baddies are bearing down on you, and that you're always only seconds away from being chomped on by a rabid teddy-bear.

Gameplay-wise, Poltergifts is pretty average for the defense genre, which isn't really a bad thing. The biggest twist in the mechanics is the indistinguishable boxes from which both enemies and weapons spring. This makes for interesting variety, but also can make success in each wave feel a little too luck-based. The weapons available are appropriately varied. However, there are some that are so clearly less useful than others that, whilst you are pinned down by enemies, you will curse their appearance. (I'm looking at you, Super Soaker... at least with version 1.1 you are now slightly more useful than bare fists.) On the other hand, the bowling ball is a joy to wield, and rightfully deserves the additional game-mode based around it.

The biggest negative for Poltergifts is its eclectic difficulty. Some waves are laughably easy, some are brutal, and some required a good twenty lives at minimum. As a result, the pacing feels weird and the thirty six waves of story mode became a bit of a slog by the end. Perhaps it would have been better if time passed in 15 minute rather than 10 minute increments? This would have also allowed for new weapons to become available faster, making for a much-needed shot in the arm.

Every year it feels like the holidays come earlier and earlier. Poltergifts is a nice reminder that sometimes we need to slow down the rush: if the hell-spawn aren't ready for their season to be over just yet, who are we to stand in their way? Poltergifts should be enjoyed by lovers of all things Christmas, Halloween, or Defense, and I eagerly await the inevitable sequel where the denizens of Boxing Day take their revenge.

The thing about most defense games is that you can plan your strategy in advance, or have ways of dealing with different sorts of threats; area attacks, automatic attack towers and such. Here, there is no way to plan as the random presents fall in random places and release random stuff. When one of the drill robots pops up close to me, I end up clicking on other gifts in the hopes of getting a baseball bat or something, but get a toy car instead. There's too much of an element of chance in this game, making it feel like the game gets to decide whether you win or whether a baby doll throws up on you.

Though the water gun actually does have a strategic advantage over other similar gifts: while many other ones just increase the damage you do with each click, the water gun has a sustained stream. If multiple toys are bearing down on you together, you can move the cursor around and damage all of them.

Frisbees and boomerangs have similar effects, bouncing off of one toy and hitting another. Those are best used when there are multiple toys moving forward, but you still get them at random. Being able to hold on to weapons, preventing them from disappearing after too long, or just having more weapons do different things would make this game less random and more strategic.

Maybe I'm crazy or spoiled or whatever, but I like my defense games to offer enough upgrades to make the higher levels at least playable. This is just... ridiculous. I have everything upgraded and I've been playing 5:40 over and over and OVER. I like to be able to basically annihilate EVERYTHING in sight after I've completed all the upgrades, yet I still keep getting buzzsawed by that FREAKING TOY CAR!

Ah, there's something else:
there are three different sets of weapons you can use, each of which can be upgraded. Usually, each set has something that deals a lot more damage per hit, one that can last for several hits more (the bats and the hammer, I think), one that can ricochet between multiple things (the frisbee and boomerang, sort of the bowling ball) and two trap/walls. The problem is, on later levels the previous weapons are less useful; you'd need a shotgun for its slight area spread but you'd get a BB gun instead.