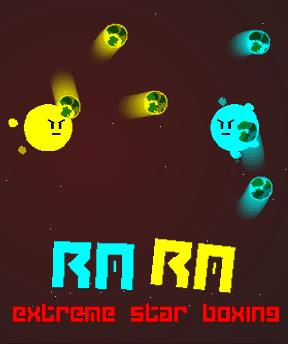 Admit it, you've always wished you were a star, trailing your planets along with you around the galaxy, using them to punch out other stars. Now you can realize this dream with a new fighting game Ra Ra: Extreme Star Boxing. Created by Matt Thorson for Ludum Dare 23, Ra Ra is a simple, silly two person game. Grab a friend and use [WASD] or [arrow] keys to move your star around the screen. The planets continually orbit around the sun, so you must maneuver yourself so they thwak your opponent until you achieve victory or die trying. As you fly through space, the planet orbits become more and more erratic as they try to keep up with you. Though sometimes the controls feel sluggish, that is more than made up for by how satisfying it is when you get a good hit in. Add a groovy soundtrack and a scorecard, and you've got yourself an amusing little diversion.

Interesting game, wish there were some training levels or a 1 player mode because the mechanics are good but I am a lonely dude.