Dinosaurs, at least the living ones, usually aren't allowed in museums, but Little Rex just wanted to see his ancestors so bad, that he just had to sneak in! However, he's having a little trouble finding his way through all the different galleries. And they're filled with so much tasty looking art! Having never received the guidance Cookie Monster did, Rex has to admit it's pretty tempting. (Why did he forget to stop to munch on a hot dog or a toddler?) All he wants is a nibble or forty. He's sure the security guards won't mind... if they don't see him! In Rampage Rex, a puzzle platform game by Comic Book Cody developer Eric Bernier and Izzy Aminov you'll be guiding a very hungry dino as he spends an afternoon taking in a little culture. 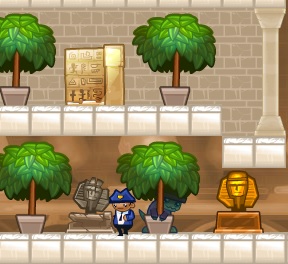 Move Rex with the [WASD] or [arrow] keys. Beating each level will require you to chomp all the art on the screen with [spacebar]. There are two main enemies: security guards, who will bust you if they see you chomping some art, and policeman, who will bust you if you're in their line of sight at all. Fortunately, you can hide behind plants and other kinds of scenery by hitting down/[S], allowing the guards to walk by unawares. In each of the 25 levels, you're racing the clock, with faster times getting bronze, silver, or gold eggs. Rampage Rex shows that stealth gameplay doesn't need to be shadowy or complex to be a lot of fun. (Originally, I was going to refer to the game as "Metal Gear Rex", but I think that one's taken). Each of the individuals levels aren't that difficult (save for some of the later ones... are we sure it wasn't Level 23 that caused a certain extinction event?), but if you're playing for medals, your timing and planning has to be excellent. I will say that while the sounds and visuals are both gorgeous individually, the cartoony art felt a little incongruous with the 8-bit music, leading me to eventually hit mute for the last couple of rounds. Overall though, Rampage Rex is an enjoyably breezy title that dinosaur-loving young players will enjoy, while still offering a bite of challenge to the slightly more fossilized set.