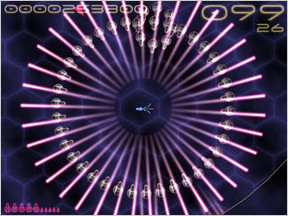 Instead of blasting away at the turrets that make up each stage, in Ray-Hound you turn their own attacks against them. Move your ship with the mouse and capture lasers by clicking the left button; any lasers caught in the field that surrounds your ship will begin to orbit and follow you. Release the left mouse button to fling them back at the turrets. You can also perform a boost by moving the mouse rapidly in any direction. Boost into lasers to reflect them off the front of your ship. With a little practice boosting becomes extremely useful, particularly against small groups of turrets. Right click to pause the game and adjust the boost sensitivity, and press F11 to toggle full screen mode.

When the timer in the upper right corner of the screen reaches zero, your game is over. Clearing each stage of turrets (see the bottom left corner to keep track of how many remain) will add to your time, but taking a hit from a laser will subtract 10 seconds.

Ray-Hound's fluid graphics and action are fairly intuitive, although its not until after the first dozen levels that the game really picks up and becomes gloriously hectic. With no audio, no high score ranking and only two of the four main menu options available, it is clear that Ray-Hound is not complete. Still, this early build is rock solid and a great time, particular for jaded old shooter fans dying for something fresh. Enjoy!

Cheers to Lavkian for being on the mark with suggesting this one as the review was being written. =)

Wow, I love this game.

Nice game, but there is a lil trick, and some fast mouse button pushing, that can help you immensly thru the game. if you stand still and press the left mouse every time the lasers come towards you, and you time it just right, the lasers will just go past you, and on the rebound, you let go, and the lasers will shoot almost directly back at the turrets that shot them. Still fun to try and get that to work...

Yeah you have to do that to survive past level 30...

I got to level 34, but had to quit... It should be harder or something. At this rate, a single game will last nearly an hour. :(

Yeah that's a little trick you can do.

The main one is just sit "on" a laser or group of lasers, and let lasers from other groups shoot at you. Click (don't hold, it's not necessary for this technique and usually just puts you in danger) to make them go on your side, and they will immediately hurt the group you're sitting on top of. Easy.

Sooooo fuuuuun! I loved Warning Forever, this is just... wow.

Why oh why must it be windows?

Perhaps a system where capturing a load of enemy fire and guiding it against lots enemies gives some sort of bonus? That'd make my silly technique redundant, as it should be.

My strategy for this game is to sit between the two largest groups, and click to direct the laser fire around you and towards the other group.

It feels kind of like cheating, though, because there's no skill involved. Oh well.

The strategy of just sitting in the middle of a group of lasers isn't too great in levels 40+.

Try this deviation. To get rid of a big group of lasers, circle around a bit, because its important they take notice and start following your movements. Then sit right in the middle and wait until they ALL fire at you. Don't move at all, just click or hold for a bit and pretty much the entire group will be decimated.

>>Perhaps a system where capturing a load of enemy fire and guiding it against lots enemies gives some sort of bonus?

Assuming I catch your drift, there is something a bit like this, because if you use the same bunch of lasers to destroy turrets, you start to build up a combo.

I can't seem to get this to work, whenever I run the program, a window pops up, but closes itself immediately afterward, any suggestions?

I have the same problem keg, are u running 98?

I know why it doesnt work! You have to get a better video card, I had 4mb now i have 64mb, and it works.

Is that the only method?

Interesting litte method - If you boost into a turret (move the mouse quickly), it knocks it out of place. Hold down the mouse button, and the turret orbits round you and absorbs a laser shot. Not the most effective of shields, but it's something.

One very cool thing I noticed while idling in another window with the main menu of ray-hound up is that it plays back clips of your actual attempts. It's a nice way to look back at your strategies and see where you can improve.

LOL, when I went to download, I accidentally got a game called "Cyclops". It's alright, but gets repetitive.