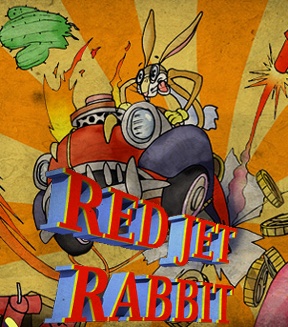 Everyone is to make you fly to the right. Man, don't you ever want to get off the launch treadmill? If only we could destroy this stupid car, we could forget about this whole getting-to-the-right business and get with that cute rabbit in the corner of the screen. Hey baby you so fine baby. Red Jet Rabbit puts you in the cartoonish driver's seat to destroy a mad scientist's car, which will win you a kiss... somehow.

The instructions leave a lot to be desired, so let me share with you what I figured out through trial and error. Hold the [space] bar and release it when the throttle in the lower right is as close to max as possible, to get an initial boost of speed. Then, hit [space] again when you want to turn on the engine. As a note of strategy, while high speed makes you travel over more ground, lower speed makes it easier to make sure you steer into the obstacles. Then, steer with the [up] and [down] arrow keys. If you've purchased additional tools such as a gas can or a grand piano, switch among them with the [left] and [right] arrow keys, and select one by using [space].

For the objects like the grand piano that you drop on your head, hit the [space] bar once, and then again when the object is directly over the car. If you hold the button too long, the object will bounce harmlessly in front of you, which is probably the most frustrating aspect of the game.

A serious drawback to the game is that doesn't appear to be any way to save. If you want to kiss that bunny, you had better be prepared to do it in one sitting. But the game shouldn't take that long to complete. As for the aesthetics of the game, they're probably where it shines the most. The zany music, art, and the main character combine for a No-Intellectual-Property-Was-Harmed version of Bugs Bunny. The entire game is a spree through that kind of Loony Tunes logic where you can smash at top speed into a giant weight (helpfully labeled five tons), merely have some comical bandages and a swirl of smoke over your head in the next scene, and in the scene after that be perfectly fine.

One could argue that Yeti Sports was the first popular game in this genre, and it certainly involved going to the left. Just sayin'.

Wow, what a terrible interface. The art is pretty, sure. But absolutely impossible to read.

in hedgehog launch, you not only go up but you can go right or left. you have a choice. and i agree with FhnuZoag, the interface is terrible, and as such i became disinterested in about five minutes.

I just saw the opening shot, and it reminded me very much of this old movie. It was a short Walt Disney, where Mickey fights with some other guy for Minnie. The rabbit looks exactly like that other guy! Can't think of his name though. It will probably pop in once I placed this comment...

Aw, geez. Sure, the art was very stylized and whatnot, but there are much better examples of this genre with actual, readable directions.

I hate to say it, but I'm really surprised a game like this got a JIG review.

I really liked this game. The art + theme are refreshingly original, in that they're not a theme that you've seen repeatedly in a flash game. This is a rare thing. The instructions are horrible, but once I understood how to play I found it smooth and unencumbered. I support this feature!

Terrible interface, as has been mentioned. It took me a long time to realize rockets and "those things that drop on you" are one-time only.

I have no idea why I'm trying to destroy a car. I know it's kind of like saying "What is the motivation here?" for a Three Stooges short, but at least some attempt to justify what I'm doing would have been nice.

Then once I upgrade, I'm going so fast that it becomes too difficult to hit things anyway...even though all the upgrades seem to be based on speeding you up. Although I guess I seem to get more damage just because I go farther? So faster is better? Even though control is more difficult? Yikes.

On top of which, I assume that hitting bigger things does more damage, but it always seemed like damage was a random number when the round was over.

And the end-of-level music...well, if I never hear that again, I'd be happy.

It does look like some work was put into this, and perhaps it's just that I don't like the style. It's difficult to play a game, however, when I have no idea what's going on.