Reincarnation:
A Demon's Day Out 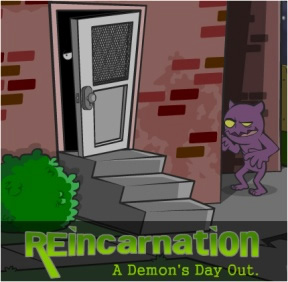 All you pathetic humans have the concept of reincarnation wrong, as you will discover playing Chris Gianelloni's point-and-click adventure, Reincarnation: A Demon's Day Out. You see, reincarnation isn't karmic. You don't come back as a banana slug if you were bad, and you aren't going to get to be a Hollywood heart-throb if you were good. No, reincarnation is a loophole that Hell has to put up with in the ultimate battle for souls. God decided to give the dam… er… darned a way out of Hell and redeem themselves, thus finding their way up to Heaven. Lucifer, in order to overcome this, has to send out his demons to re-kill "reincarnies" before this happens.

This is, of course, EVIL…

As a demon, you use your point-and-click skills to manipulate the objects around you, solving puzzles as you go. Your demonic powers include levitation and the operation of simple machinery while your creativity allows you to get to no limit of utter mischief.

This is, of course, EVIIIIL…

Gain entry to the reincarny's house, find his sin, and then come up with a way for him to return from whence he came… That's to say, Hell.

This is, of course, EEEEEVIIIILLL…

Analysis: This style of point-and-click adventure is really beginning to come into its own, evolving much from the plainer Hapland-style games. With the Reemus series, The Visitor , and now the Reincarnation series, the type of point-and-click adventure where you act as an invisible hand that modestly affects the environment on behalf of the character has come to develop loads of character, depth, and charm.

With Reincarnation we see healthy doses of humor blended generously with a sort of light-hearted taste of the macabre. Nicely drawn in cartoony drawings, gorgeously animated, and fairly well written, Reincarnation is easy to look at and easy to get into. This is helped along by the surprisingly good voice acting which really throws its weight into the project. Lucifer has a notably posh accent, while the demon you play as has an accent I can only characterize as standard evil.

And did I mention he was EVIL? If I haven't, don't worry. In an endearing way, our little purple imp takes no end of pride in expressing how EVIL he is.

The puzzles hit a sweet spot between easiness and creativity. A deductive eye should be able to suss out what needs to be done in each room without taxing the gray cells too terribly much, but the difficulty level isn't dumbed down so much that you don't appreciate the level of intricacies of all of your EVIL-doing.

There are a few downsides that should be mentioned. For one, while the voice acting is well done, the recording of the voice acting could have used a quick polish or two and you can hear some of the hisses and static that accompany amateur recordings. Meanwhile, while the puzzles themselves are decent, there are a few moments where you are forced into pixel hunting, which is always maddening.

Aside from that, Reincarnation: ADDO is a nice little EVIL point and clicker with a dark sense of humor and puzzles that should neither place a heavy burden on your brain nor your time.

Play Reincarnation: A Demon's Day Out

[Hungry for more EVIL? The second chapter in the Reincarnation series is out.]

Screen 4: Skeleton in the Closet

-Picture of four men
-Vase
-Floor below vase
-Key
-Keyhole
-Specific instructions: Spin the three cylinders until NONE of the colors match the men on the picture

Sorry I couldn't write a more interesting walkthrough. Hope this will do.

Screen 4: Skeleton in the Closet

-Picture of four men
-Vase
-Floor below vase
-Key
-Keyhole
-Specific instructions: Spin the three cylinders until NONE of the colors match the men on the picture

Sorry I couldn't write a more interesting walkthrough. Hope this will do.

May I ask for closing </i> tag. It seems to me like you forgot one.

Now that you mention it, I think the italics leaked down into the review for Loom Blend.

Enjoyed the game, though finding exactly where to pick could be a tad illogical, but the fact there was a provided walk through helped out.
Enjoyed it!
Thanks for the link. :)

Nice little game, let down by the pixel hunting, and that only the next place you had to click was selectable (i.e. the cursor turning into the pointy hand).

Also why can't the demon just stab the dog? He's EEEEVIL as he likes to remind us. The oven thing would have been fine to prolong the agony is he had actually turned it on, but didn't do that either.

I thought the game was interesting, but I found a slight bug (I think). When you're on the second floor and you click on the vase before the correct step, it just hangs there and you can't click on anything else. Maybe it was just for me, but I had to restart because of that. ><

That was an oven? I thought it was a dishwasher.

please make a second one this one rules

[Edit: There is already a 2nd one. Check the review for a link to it. -Jay]

Appealing graphics and animation, but quite a bit of pixel hunting, and there didn't seem to be a whole lot to the puzzles beyond mousing over everything until you find something selectable, and then doing it. This made it a combination of too easy (when the next thing to select is an actual object) and too hard (when the next thing to select is, say, a specific part of the background with nothing particular distinguishing it from the part right next to it). Wanted to like it more than I did, since the graphics and animation are really charming.

When I click play on first one, a black screen appears. On second one, a button shape appears.

Why is it not loading?
What should I do?

In the sequel game, how does one get out from the hall with the lockers? I keep making the guy pick up the paper, but nothing happens.

Age of Z Origins - Why Everyone Is Talking About It

1,932 Views
1 Comment
jayisgames.com— Age of Z Origins is a massive, super engaging mixture of strategy, tower defense and the drooling undead. It's creating massive buzz around the mobile gaming world, and with good reason. With more than 40 million downloads worldwide, the...  ...

3,298 Views
3 Comments
chrpa— Jayisgames needs your help to continue providing quality content. Click for details After more than a year we've got a new game by Yonashi and it's a good one! You stand in front of a wall with eight lockers...  ...

2,390 Views
2 Comments
chrpa— Jayisgames needs your help to continue providing quality content. Click for details Welcome to Weekday Puzzle! In unique platformer by mmatt_ugh is only one key needed and you can still jump a lot. Then comes an interactive fiction by...  ...

3,206 Views
2 Comments
chrpa— Jayisgames needs your help to continue providing quality content. Click for details Hi, Retro Weekend Escape is here! In this week's games you leave the escape room in a rather unusual way twice. In Vitamin Hana's game a drone...  ...