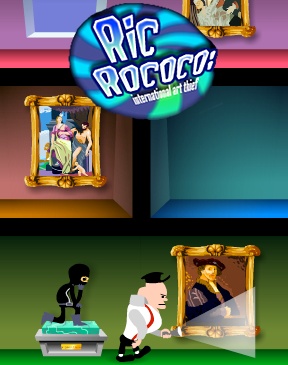 What is it about thieves, especially those who steal priceless treasure, that elicits our sympathy? I mean, drug dealers and weapon smugglers are roundly reviled, assassins are at best "morally conflicted" despite the cool black cowls and capes, but of all the serious criminals, it only makes sense to speak of a "lovable thief." Or "lovable pirate," but that's just a thief with a big boat. Anyway, maybe it's because the "gentleman thief" never hurts anyone, and never deprives anyone of anything they truly need. It's not like Phineas Q. Vandersnoot, needs another Renaissance masterpiece; why shouldn't we enjoy it as a talented footpad helps himself to some of the loose artwork lying about?

That also might be the appeal of games like Ric Rococo: International Art Thief. Somewhat similar to Art of Theft minus the story and snazzy hat, Ric Rococo is a thoughtful game of stealth, theft, and escalator navigation that brings you the thrill of non-violent sneaking and filching in a museum full of inattentive guards, pivoting bidirectional cameras, unintuitive elevators, and highly stealable paintings.

Control Ric, looking good in his zip-up black spandex ninja catsuit, with the [left] and [right] arrows. The [spacebar] does most everything else: riding escalators and elevators, pilfering paintings, flipping switches, posing on unoccupied pedestals to elude clueless guards, and more. You can also use the [up] and [down] arrows to ride escalators and control elevators, though I find this doesn't work as well as the [spacebar]. Once you grab a painting, you have to find an open window to pass the painting off to your partner in crime. Elevators and escalators are the only means of moving from floor to floor, and they are laid out in an increasingly convoluted fashion as the levels progress. You have a limited time to collect a certain value's worth of paintings, so looking at the map at the beginning of each level and planning your itinerary is essential. Do you spend time grabbing the numerous but less valuable paintings near your point of entry, or do you risk capture to obtain the more valuable but better protected prizes farther afield?

Many browser-based stealth games have a generic "hide" ability that can be used any time, or let you hide in certain areas, like in shadows, or behind furniture. Ric specializes in the "goofy" school of non-detection, hiding either by hanging a stolen painting from an empty hook and curling behind it like a wall-climbing turtle, or by standing statuesquely on one of the surprising numerous empty pedestals like a ninja-clad Hermes or Thinker. More signs of the developer's humorous bent include the colorful, if flat, cartoony design, and the kooky treasures you buy after each level for your swinging, hyper-modernist thieves lair. Delight as you earn the likes of the World's Largest Truffle on Buttered Toast, because even grotesquely proportioned dessert items are improved with buttered toast.

Ric Rococo features only ten levels, and though the later levels are hard enough that you might have to repeat them, you may feel disinclined to do so. The pace of the game is such that there isn't much incentive to repeat parts of a level just to successfully complete it. But for the initial run through each level, Ric Rococo has it's charms. Who wouldn't want to be Ric, jetsetting to one fine, poorly-defended museum after another? It's a gentleman thief's dream.

His footsteps are timed to the beat of the music! Neat.

The game is cleverly done, though I severely dislike the limited possibilities for dropping off images - as well as trying to figure your way around within the time limit. Still stuck at level 2 - I just can't get enough paintings to the windows in time to complete the level.

A zen-mode would be nice, rather than this "only just manage to finish the level" pace.

Definitely was a better game when it was called Trilby: The Art of Theft

how do you control which floor you go to on the elevator?

Am I the only one that REALLY hates the elevators and is having trouble getting level two? I mean, I got stuck on floor four and couldn't get anywhere else!

I liked that the footsteps were timed to the music, which was a neat idea, but I found controls a bit sluggish. It would be cool if your ninja thief moved like a ninja thief and not like Mr. Magoo.

I agree with all of the above:
Cool thieving music, funky little walk that is barely sophisticated, and the freakin' elevators!

Could have been good if the elevators worked. As it is, absolutely unplayable.

if you hit [space] next to the elevator when it is not on the floor, it will be called to your floor relatively quickly.

you hit [space] to enter an elevator it will automatically continue in the direction it was going, either up or down. Hitting [space] at this point will cause it to switch direction, taking you back to the floor you were on, then continue in that direction

you cannot be seen while in the elevator

once you figure out the proper method for controlling them they work fairly well, and will not be a problem.

Y'know those spotlight security cameras that are right next to windows or valuable paintings?

It's not required that you be right on top of paintings or windows to use them; when the spotlight is "on top" these things, you can stand right next to it and still take/give the painting. So you could take a painting that's right under a guard's nose (real ninja, snatching it right before their very eyes), and then immediately hide behind it, and you only need to wait for cameras to swivel once. If you bother to wait at all, since security cameras don't do anything but make loud scary noises on levels one and two.

That said, I passed the first four levels very easily (and neigh quit because of it!) but the map on level five is designed so that the guards end up chasing Ric into a dead end unless planned right. So saying, level five is the first one that actually requires a real strategy, which strikes me as much too sudden. They really shouldn't have saved up all the fun parts until halfway through the game.

decrease your time by 10 seconds

Ah, there's one thing that might be objectionable. (Darn, triple post!)
The prize for Level Nine is a

Really. I mean, I'll delight at oversized snack foods, but to spend 20 million plus dollars on whale genitals? What? And hollowing out so you can sit in it? WHAT? And hang it by a chain while Ric and his girlfriend dance manically in celebration of their new furniture?

That strikes me as just a tad creepy.

Any level-based puzzle game without a "Restart" option is automatically my enemy.

@Birdieball: You want Trilby: The Art of Theft. It's somewhat similar, a bit more complex, and you move like a ninja, not like Mr. Magoo.

I think that in order to compleate level 2 you have to go for the most expencive paintings first and without stoping. Just as he said "Do you spend time grabbing the numerous but less valuable paintings near your point of entry, or do you risk capture to obtain the more valuable but better protected prizes farther afield?", that gave me the idea that he was hinting to me to go for the better priced paintings. Just a thought.

You can easily restart a level using the ESC key, then clicking on the level again.

Be wary, though, that if you click a level you've already completed, you'll have to redo all levels after that one, too.

I think this game is paced just right for a casual player. All the levels after about #3 are challenging, but not impossible to do with a bit of planning and forthought. Use the map to see where the most valuable paintings are - often you need to snag at least one of them to make the goal within the time limit. As you get better at planning, it is possible to entirely clear some levels.

Overall, I really enjoyed this game, and hope that they come out with a sequel!

Once the elevator doors close - press up or down key, and that will change your direction. The doors will open again, but just stay on.

It's supposed to be hard, folks.