Pinball isn't exactly a game of strategy. You launch the ball and watch it bounce here and there making noises, sipping a slushie and absently glancing at the claw machine in the corner. Well what if the formula got spruced up a little bit? Maybe with some action RPG fairy dust sprinkled over the top? The result is Spotcos' Ricochet Heroes, a Ludum Dare game which has you launching your merry band of spiky-haired heroes from town to town, pinball-style. Use the mouse to aim, charge, and release your little avatars and watch them bounce off mountains, trees, inns and gateways, doing battle with monsters along the way. Use the [arrow] or [WASD] keys to tilt your characters in a certain direction to give them a little bump. Keep an eye on health. Too much time spent in the field battling slimes and fox beasts will cause your heroes to die. If you want to save that princess at the end, you'll need all the help you can get. 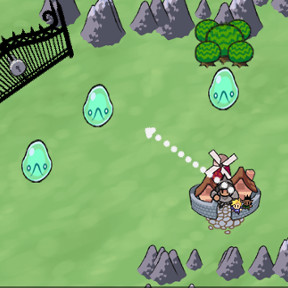 To be fair, Ricochet Heroes isn't really an RPG so much as an arcade game wearing an RPG's clothes. You don't upgrade your people and the coins you collect on the way are mostly just for score purposes. It's still wonderful, goofy fun watching your heroes bounce all over the place, especially when you manage to land them in the guild halls which can spawn multiple heroes at the same time. There are also inns you can have them crash into to replenish health and gateways which requires keys to unlock. It's all very high energy with tongues wedged firmly in cheek. The art style pays homage to several retro titles of yesteryear, though it should be said the game seems to have bit off a little more than it can chew in the graphics department. Some of the later levels incur lag, even on stronger computers. Like real pinball, sometimes you're relying on blind faith. But that's hardly a dealbreaker. Ricochet Heroes is a wonderful little tribute to the glory days of pinball and a sly sendup of RPG traditions. It's also plenty of fun to play. Check it out.

Awesome Game, WAY TOO SHORT!! Make this into a full game please!!

The lack of a mute button has me perturbed... A serious and basic problem

Tip for anyone struggling, remember to use your ability to tilt. You can tilt in all directions.