I was skeptical and wasn't expecting much from Ricochet Infinity at first. There are a lot of Breakout clones out there, including a lot that use dynamic targets, the most impressive of which is Break Quest. And while Ricochet Infinity is no Break Quest, it is a highly engaging and addictive game that should satisfy both breakout and shmup fans alike. 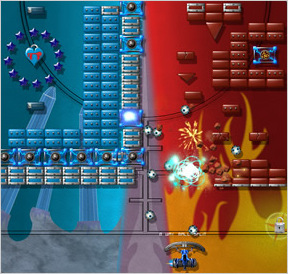 Ricochet Infinity continues the space theme of previous Ricochet games, whereby your paddle is a spaceship and the quest features the ability to be promoted to "Pilot", "Commander" and similar spacey things. In addition to the basic breakout formula, you can (and should) collect golden rings hidden throughout the levels, which will enable you to get different ships. Aside from aesthetics (they're pretty cool-looking ships), each ship has a specialty which will be triggered when you collect the Ship Special powerup. This is a combination of regular powerups, which become simultaneously better and worse as you earn more advanced ships—for instance, a high level ship special may give you a fireball and a wider bumper, but also make the ball faster and smaller.

Powerups available include our old familiar friends: the fireball (destroys all bricks), the rail ball (goes through all bricks), and the sticky paddle; and yet there are a few that offer fun variations such as the EMP (electro-magnetic pulse—blow it up when the ball is near a cluster of bricks) and the Blossom (trigger to cover the screen in explosive stars). Another neat trick is the freeze powerup—normally you'd want to avoid this as it traps your paddle in ice for a few seconds, but if you can survive those seconds, you get a thousand-point bonus. 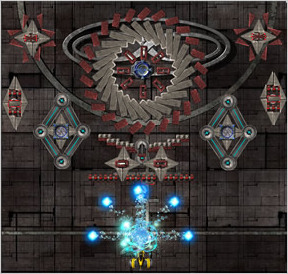 Moving targets are nothing new in themselves, but Ricochet Infinity features some extremely cool dynamics. The Recall facility enables you to "recall" the ball back to the paddle by right-clicking. Big deal, you say. But wait, there's more! The Recall function is integral to many advanced levels, including levels where moving your panel actually moves the entire game board, so you have to hit the ball and then manipulate the bricks to where you've just hit the ball. It's a lot harder than it sounds.

The maps included with the game are incredible—even the easy levels are pretty good, but at higher levels they really shine. Many require strategic thinking to solve, as the breakable bricks are hidden behind metal walls with no sign of a trigger. Some even include full animations, if you're patient enough not to release the ball—for instance, in Jail Break, an animated brick guy blows his animated brick friend out of jail by attaching exploding bricks to the bars, then they both run away, and you see the brick police car speed into view to chase the fugitive! And when you've played all the levels in the game, you can download user-created levels as well as create your own.

Another aspect of the game that I haven't checked out is the Mouse Party feature—you can add another USB mouse and play multiplayer, either competitively or cooperatively. If any of you use it, tell us about it in comments!

Ricochet Infinity is a bit like the Rolling Stones—not necessarily very original, but heaps of fun. You can, in fact, get what you want.

I have the full version of this, and lemme tell ya, it is leaps and bounds better than it's predecessors.

Mostly due to the fact you can get trophies and unlock paddles and balls.

Reminds me of one of my favourite retro games Arkanoid (or not so retro when I first played it). I just played the demo for an hour and am not going to buy it, just don't have the time I know I'd spend with it. Excellent game.

This game is awesome, I mean really really well done, but I think $20 is too much, I would spend 10 bucks easily though.

Eh, I liked BreakQuest better. This is way too cluttered and confusing.

Although one reason for that is that when lots of stuff is happening, my computer starts lagging. Didn't happen on BreakQuest. I wish I had the $x that it costs.

I love the Ricochet games, this one is great too. For such nice graphics I was shocked that it barely affected my pitiful 512 ram at all. The only annoying feature was that mascot, but there's an option to get rid of it. (I'd rather have the MS Word paperclip cheering me on.)

I personally like ricochet games myself except I don't have money to buy the full version :( Anyways the trial was good, since it had new powerups and what not. Nice weekend download. :D

I bought the full version on a whim, and I really love it. Some of the levels are nicely frustrating, but I've yet to meet one I can't get all the rings on.

Well worth however many pounds I spent.

Well, I was able to try out the Mouse Party mode.

While the Competitive option is alright, I much prefer the Cooperative mode because it enables you to get the levels done in half the time with twice the help.

Tail Gunner mode is interesting, making one player hit the ball, while the other player shoots a gun that stems from the ball, allowing the bricks to be taken out somewhat faster.

The different "ships" that are the paddles is a nice touch to a classic game, my free trial hour was up all too quickly...

I really have to admit that I liked richochet lost worlds more - this seemed like a step backwards to me.

are there any cheat codes to unlock all levels?

I like playing Ricochet Infinity, but I'm STUCK in a level called 'Bombs & Slots, Slots & Bombs'. It's impossible to get out of. Can someone please help?

dear elaine,there are three slots in either side in top corner(all having different power-ups).by hitting one slot the power-up will change in the slot.now in the middle of the screen,there is is brick with green border and a green dot in the center.if you hit it,the order of power-ups in the right-hand side will change.hit it and change the power-ups till you get 3 same power-ups(lightning ball,ship's helper or extra ion-sphere).do the same with the slots on the left-hand side also.i advise you to take a ball catcher first,then an extra ion-sphere and then a rail ball.

dear none,'DEBUGUNLOCKALL' should work for you.

quote: are there any cheat codes to unlock all levels?

on certain levels, recall is essential for getting those elusive rings, but the ball travels too fast, especially in medium+ skill level, try finiding a slow, power up and clearing one side of the play area and swing ing the ball from the oppsite, clear side into the rings or key bricks

remember you can click save and exit one the stats screen then replay a level to get all the rings.

Use user levels, or create your own to get trophies that may allude you in the official levels. also, these levels extend gameplay and can give you easy rank/points boosts

and remember to read the editor documentation before using the level editor, as it contain so information that is useful when creating levels.