U mad, bro? More like, U Mad Max, bro! Because that's what U will feel like while playing Road of Fury 2, a vehicular arcade rail-shooter by IriySoft. It's been but months since the bombs dropped, and with winter setting in, the quest for a safe haven has become all the more dire for our hero Cole. Pursued and ambushed at every turn by the Bloody Gear Gang (who, it must be admitted, was the party Cole lifted his sweet ride from), he must make his way across a post-apocalyptic hellscape, crashing and blasting everything in his way. Maybe he'll find allies. Maybe he'll find safety. No matter what though, he knows he's going to see a road full of fury. No really. That's what the opening narration says. Just roll with it. 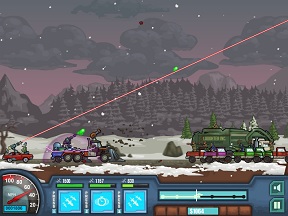 Your cars in Road of Fury 2 have three offensive components: your main weapon, which automatically fires and aimed with the mouse, your active weapon, which charges over time and is activated with [1], [2], or [3], and your "always-on" passive boost. As you drive and destroy enemies, you'll get cash to unlock and upgrades components of your car, as well as those of the allies you'll add to your convoy. Certain enemies will release health, cash, and weapon charge power-ups that must be actively collected with the cursor. Speed past all five checkpoints, and maybe things won't be as hopeless as they seem. The first thing that leaps out about Road of Fury 2 is its excellent sprite-work. Games like this rise or fall on the quality of its explosions, and let me tell you, Road of Fury 2 has some very satisfying ones, with spare tires, car doors and tiny limbs flying all over the place. It gives it a real classic arcade feel in the presentation, and it's what kept me playing, even as the point-and-shoot gameplay got a little repetitive. While the customization and upgrade options are appreciated, much of the time, especially in the end-game, it felt like it was mostly coming down to wars of attrition rather than clever strategy. Still, even if seeing one wasteland means you've seen them all, Road of Fury 2 has an undeniable charm and silliness to it that draws you in, round after round.