Road of the Dead 2

It's aich-ee-double-hockeysticks on wheels once more when EvilDog and SickDeathFiend join forces again for Road of the Dead 2, the zombie-filled sequel to the 2010 original action game, only now with 100% more shooting and grinding. This time, your heroes are two survivors desperately trying to escape the city, one driving while the other literally rides shotgun (or pistol, or SMG), dealing with any hazards in the way. Use [WASD] to control your speed and steer, and the mouse to aim and shoot, hitting [R] to reload. You can blast certain obstacles to clear a path, like cars which will explode and damage anything around them, but you'll also need your weapon to, uh, forcefully dislodge any zombies that land on and cling to your hood before they attack and it's game over. When you die, you'll be given the option of restarting at the last checkpoint you passed. (It's okay, you'll keep any upgrades you bought or points you earned.) 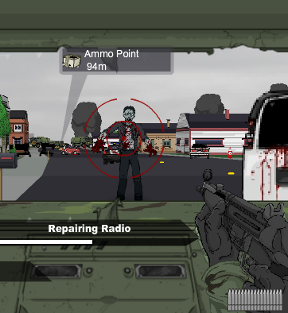 Don't be afraid if you stink at everything initially. Not only will your characters' skills improve as you play through basic use, but by stopping in front of certain buildings when the screen prompts you, you can do everything from gather ammo (only the pistol has infinite bullets) to spend "RP", earned through basic play, on new weapons or upgrading your old ones, or even repair or enhance your car to avoid explosions. Make no mistake, Road of the Dead 2 is a game with a massive amount of talent behind it provided by people with a passion for the genre. The cutscenes are animated and fully-voiced, the environments are detailed, and the action is hard and frantic. There are quite a few surprises and changes in store, from the way you can use the landscape to your disadvantage and even some new enemy types and beyond, so make sure you refer to your Survival Guide whenever it gets updated.

The downside is that it feels like the difficulty has missed the curve and gone straight off the cliff, with what feels on a greater emphasis on grinding for upgrades over skill. Zombies take a ridiculous amount of damage before they fall off the hood, even if you're emptying entire clips into their faces, so early on if you get more than one clinger or have to reload, you're basically dead. When combined with how ridiculously far apart the checkpoints are, as well as the way you have to wait for upgrades to complete, you have a game that feels like it's actively fighting you instead of merely challenging you, and for some people that's going to make it more frustrating than fun. It's not that these changes or additions are unwelcome, and in fact they add a new layer of challenge and involvement to a familiar formula. They just need a bit of tweaking to make failure not quite so frequent, inevitable, or enraging. If you like a challenge and don't mind a bit of a grind, Road of the Dead 2 will keep you driving for quite some time... especially if you play logged in at Newgrounds for user-generated content, or make your own!

Play Road of the Dead 2

Dora, I don't remember the first game in the series being that different in terms of having to grind for upgrades to make it through.

I typically don't find repeated deaths frustrating, so my first foray into this game wasn't very discouraging. Actually, I didn't die too many times as long as I kept my SMG reloaded and took it relatively slow in order to "stop for ____."

I know the original had grinding as well, but I felt that the way upgrading was handled in this combined with the unforgiving shooting made the difficulty spike considerably in a way that forced grinding over skill, which is unfortunate when this is a shooter where the first game was just an arcade game.

Overall I think this game is really good, with only a few downsides (namely grinding and waiting for upgrades). One more thing is that the game really could do with less parking on the road, as it cuts the flow of the game. A suggestion would be to allow instant upgrades at rarer hideouts/checkpoints, so players can opt for more common "field upgrades" or wait for a safe spot.

I would like to point out that several flaws in the past game have been cleverly improved in this sequel.
- The restriction of shooting and driving at the same time in the first game has been solved by having two protagonists, also adding a new dynamic to the game.
- The problem of "how far can you go with a tireless car" was solved by being able to repair your vehicle.
- The annoying survivors running around can now be rescued.
- Excess RP after maxing out your vehicle can now be spent on more luxurious purchases.
- A lot of new content overall, making it less monotone.

But then again, I also don't think this game is in the same genre as the original title.

This game feels much more like a free-flowing defense title than an arcade action dodging/survival game. In Lost Guns, the persistent narrative of two soldiers trying to escape a zombie outbreak/apocalypse provides the motivation for the whole exercise, but each pit stop for supplies, upgrades, or to drop off survivors became it's own stage of a defense game. And as in every one-man defense game, keeping your guns reloaded in between encounters is paramount, since switching between them is crucial to some dicey situations.

So even though I was only inching toward the next checkpoint, I found it a much less frustrating experience. My largest complaint at the moment is that taking the plodding defense route doesn't allow for many high-scoring combo opportunties (or at least not during early game, when gun kills take too long to count for combo multipliers), but successfully picking up survivors grants no small amount of bonus RP.

For me, playing the game as a defense title actually created a seamless and emergent experience. Each pit stop indicator represented an opportunity that I could use or pass on, but also a scenario where there are either no zeds in sight or far too many to be worth the measly one clip of ammunition. Either drive on, or park, grit your teeth, shoot things in the head, and move on towards your destination, whatever that ends up being.

So I need to append my statement by saying that there are stages in the game that force a fast paced driving strategy more akin to the original game.

But you can still peel clingers off by slamming into another obstacle at the cost of a chunk of armor. Just like the good old days.

I'm still enjoying the way the game can change its pace.

Braking in time to stop at a desired location seems to be difficult at any relatively high speed. Realistic, but frustrating, since you can't back up to pick up a survivor or go back a few meters to a very-needed garage/church.

I also don't necessarily see the point of SWITCHING the two drivers. They share health, so you can't protect one from harm by having the other drive. Perhaps the other character just serves as another bank of ammunition?