For those of you who remember a little gem called Robo Rally, this game should be comfortably familiar. RoboRunner is a DHTML, turn-based strategy, online board game created by the people at EyePlay Games. 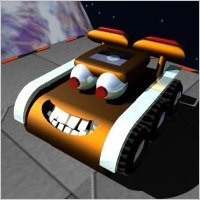 You play as a Fixer class bot trying to repair and inspect Inspection Points (IPs) on the hull of a ship. The elements on the board are on a grid, and you maneuver around walls, shift down transporter rails, avoid pits, heal at repair depots, and move your bot to the checkpoints. Bots can be randomly optioned to have a booster, dual lasers, clamps, or other options. The boards range from 7x7 squares to 20x20 boards, and everything in between (my personal favorite is a 7x17 board).

Movement comes in the form of randomly dealt program cards. Each card can be either a movement card (move 1, move 2, move 3, or move backwards 1) or a turn card (left, right, or U-turn). Every round, you place these cards in order of your desired program by drag-dropping them into place. The first five cards become your move and execute in the same phases as your opponents, one card per phase. Each round, the order priority changes according to your performance the last round; the better you do, the higher your priority. The problem is, other bots doing their own moves can throw you off your previously planned course. Additionally, you lose a program card for each point of damage you take, up to ten. After five points damage, the last card locks and will be frozen as the card it was programmed for in the last round. You can choose to reboot, sitting still for one round, or find your way to the repair depots that heal either one or two points, depending on the square.

You can play by yourself, or with up to seven other bots. Additionally, you can substitute some of those spaces with Scanners, which are AI bots that are programmed by the server. Most games are played in "slow-time" with the next round up after everyone else has executed their programs. There is also the option for a "real-time" game in which everyone who joins are expected to stay and play until the game is finished.

Additionally, if you don't feel like playing a checkpoint Robo Runner game, you can also play the last-bot-standing Robo Arena, or a team Robo Recon game, where you try to push a crystal back to your airlock starting point.

The game offers ten training missions, so you can learn the game mechanics hands-on before getting in on the action.

There is a very active worldwide user community and there's almost always another player on, usually more than ten. There are constant updates to the ship roster to the community forum. They hold regular tournaments and there are series games looking for players all the time.

Players can play for free. You can have up to ten active games going and can initiate a game with several options. For a nominal fee, you can have up to five times as many games going, and contribute to the fleet by making boards. Several more options come up during game creation as well. But a player can have a very fulfilling experience without spending a dime.

All in all, it's a lot of fun to play, and a great environment to have anything from a casual, play-whenever-you're-able-to pace to an always on, real-time intensive experience. Give it a shot. The more, the merrier. (Registration required) Click.

Since this cries out for a comment, I shall fill the void.

...It's not a bad game (well, not as bad as having no comments implies), but it's just not all that interesting. The change of pace from nothing at all happening to everything at once and a little bit of chaos makes it a tad less fun than it should be. I know I shouldn't judge a book by its cover, but the training missions are a bit dull and only give a glimpse of what might be with the last mission. I'm not sure why, but even on the last mission the way my car moved surprised me a little (enough to make me even less interested).

I'm glad you enjoyed it, though, and I'm sorry I haven't.

I actually haven't played this one yet... I don't feel like registering for anything. But Robo Rally the board game is something my friends and I just discovered the past month or two, and it is loads of fun.

Ben, thanks for filling the void...;) As for interest, it's not a game for everyone; the pace is a bit slow for some, even if you go for the RT (Real Time) games. I doubt anyone holds it against you.

As for your issue with the training missions, I imagine that's part of the reason they're there: to help players not be surprised by what happens with their moves.

Sorry it didn't work out for you.

However, to help generate interest, I'm inviting anyone who wants a more hands-on approach to the learning curve to add me to a game. I'll happily answer any questions anyone might have. Just realize I can only have 50 games up at a time...;) Add the word "Newcomer" to the game title and place the player "Silverkun" in one of the free slots.

I've also created a few newcomer games. They're first-come, first-serve, but if there's enough interest, I may keep up that series.

Actually, that whole "10/50/100 games at a time" thing also bothered me a little, because you have to manually delete finished games. I don't mind having a record of how my games have turned out, but needing to personally delete every game after you finish them (or else be prevented from playing more) is rather annoying and sort of pointless. I don't understand why there couldn't have been some way to copy and paste the contents of the window that says what's going on in the game; it's all text, so it couldn't take up nearly as much room as the game itself takes. At least keeping track of who won would save the relevant information without impinging on the game limit.

Allow me to suggest clicking on your "health bar", either after a turn, or after a winner has been declared. It will bring up a "Captain's Log" that, while it might not log the chat, but will log game activity, move by move. I usually save the page and tuck them away, since the link to the log only stays up as long as the game is active; if you're the last person to log out of a game, the game is deleted, logs and all.

Additionally, if you click on your bot name, you'll bring up your profile (I'm using mine as an example) which should make tracking things easier.