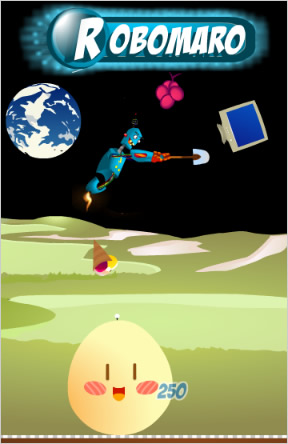 As everyone knows, the moon is inhabited by happy rosy-cheeked blob-things called Maro, who love to play Forehead Catch and gorge themselves on snacks. But oh no! Here comes a barrage of heavy consumer goods from Earth, goods which are not edible and tend to flatten the poor Maro if they don't get out of the way, which they are not nearly smart enough to do. Enter you—in the role of a jet-pack-equipped robot shepherd with a crazed look in your eye and a big shovel in your twitchy metal fists. Your job is to batter to smithereens all the falling television sets, phonographs, and other blunt objects before they can crush the helpless moon blobs. Your secondary job is to allow foodstuffs to reach the hungry Maro, so that they can eat and grow. When they reach a certain size, a ramp will whisk them away and you move on to the next level of carnage. To recap—if it's not food, break it. If it is food, don't.

In Robomaro, (by Ninja Kiwi, makers of Bloons and Hotcorn) your robot moves along with the mouse pointer, while your Maro below do their slowly oozing best to follow. Click to swing your shovel, which destroys food and smaller items in one hit. Larger objects, like cars and pianos, may need two or three whacks before they fall apart. Every few levels, you'll encounter a bonus stage full of turbo-speed snacks, followed by a boss requiring absolutely zero strategy to defeat. The bosses resemble the classic Street Fighter II car-vandalism stage, which is no bad thing.

Grab the power-ups that float in from the right side of the screen by flying into them. Some of these can be quite entertaining. One gives Robo a spinning buzz-saw hand, while another transforms the cute little blobs into toothy green monstrosities, capable of devouring anything from flatware to SUVs.

The game ends when too many members of your flock of blobs gets squished. Good luck, and don't let the junk monster get you.

Analysis: Robomaro embraces a kind of functional surrealism that works really well in casual action games. What do pianos, chandeliers, and Rodin's The Thinker have in common? Well, they would all hurt if they fell on you. Why are there no falling safes or bowling balls? Because you couldn't break them with a shovel. Simple.

It reminds me of the Mario series, which has given us an iconic cast of nonsensical images that only exist because they filled their roles, once upon a time. Mario battles turtles because their shells can be used as weapons. He has a mustache because it visually separated his nose from his chin in the original Donkey Kong. He rides a dinosaur because that's what you would do if you were a video game character limited only by your creator's imagination. You would ride a dinosaur. And you would fly, which Mario also does. There's a major wish-fulfillment thing happening.

Why am I going on about Mario in a review for a simple flash game? Because like many of the pioneering game designers, Ninja Kiwi have a sense for a great concept, and the courage to follow through on their own silly impulses. "Monkey Pops Balloons with Darts" is a fantastic tag line, and so is "Robot Smashes Pianos with Shovel". While most game-makers bend over backwards to create a consistent, recognizable environment (even when that environment is completely abstract), it's refreshing to play a game fueled by pure whimsy.

Robomaro isn't the only game like this, of course. Newgrounds and Kongregate are packed full of creativity and random ideas, often at the expense of playability. But Ninja Kiwi have put in the extra effort. Robomaro's mechanics, visuals, and sound design are all strong enough that you can just relax and enjoy jet-packing around, madly swinging a shovel. The consumer goods shatter into their component parts convincingly with specific crunchy sound effects, which is important in a game about breaking stuff. All the game's characters seem to be really enjoying themselves, judging by Robo's maniacal violent glee and the Maro's delightful "Wheee!" at the end of each level. Robomaro is not the deepest game around, nor, I suspect, the one with the broadest appeal. It is, however, the awesomest flash game I've played this week.

First post!
Anyway, this is a good game. I got to level 8 on my first playthrough, and i'm tempted to try and beat that...

Heh, quite an amusing little game. Nice sounds and cute animation, but the gameplay does tend to get boring after a while. I got to level 13 with five lives, at which point it became more amusing to watch my little maros get squished by heavy furniture and hear their pathetic squeals than continue to protect them. Yes, I'm a sadist. >:D

"Why am i going on about Mario in a simple flash game?"
Could it be because Robomaro kind of sounds like Robomario, and the little italian plumber got stuck in your head?

The house on 15? Just hit the toward the bottom of it and click very fast. Levels past that survive until you can get a power up is all I can say. I only got to 17.

Too bad, the egg guys are really cute.

I was able to get to around level 23 before things got a little too fast for me.

1. Make sure your little egg friends grow evenly -- the bigger they are, the harder they are to protect.

2. If things get too fast, just focus on breaking the bad stuff, rather than worrying about catching that extra bit of food.

3. Sometimes dodging is better than breaking... but usually not.

And finally a plot spoiler:

There are no more bosses after level 15 -- just more and more stuff... as far as I've seen anyway.

Please someone tell me that I'm not the only one who sees a kind of familial resemblence between the Robot and the Genie from Alladin?

Got to level 21 before being utterly, helplessly smushed. I'm wondering how many more levels there are.

Anyone else getting the following error message?

[Edit: That is a common Apache server error, most likely temporary. Just reload the page, or try again in a few minutes. -Jay]

Oh, and Psychtronic, if this is the awesomest game you played this week, this must have been a slow week then.. or Gigolo Assasin somehow slipped under your radar. :)

Also, even though I don't see a slightest resemblance with this game and Mario platformers (except if Robomaro is mistakenly read as RoboMario), but at least that digression in the review reminded me to fire up my old Super Mario World cartridge. Now THAT'S an awesome game.

I indeed have not played Gigolo Assassin yet. I'll have to give it a try.

I may not have made the link between Robomaro and Mario clear, but it doesn't have anything to do with game genre. I just thought it was interesting that Robomaro has so many elements that make no sense on their own, yet serve a purpose in the logic of the game.

I only really talked about the falling objects, but the ramp that whisks the blobs away at the end of each level is another good example. The game needed a method of signalling the end of a level. It makes no sense that there would be a ramp there, but it's an easy and dynamic way to clear the blobs out of danger. So the designers not only gave the ramp a little animation of its own (and gave the blobs a happy voice effect), but they also worked it into the artwork for the title splash screen. It still makes no sense, but now it's a consistent part of the game world.

Most flash games work in the other direction. Almost all of them, in fact. The designer gets a cool idea for a game element, and then tries to find a use for it in the game. You end up with a bunch of cool stuff that doesn't fit together harmoniously. Robomaro feels silly but functional, like everything is meant to be there. That's the feeling I always got from the Mario games, and it's rare in flash games (not so rare in the downloadable indie game scene, though). Doesn't mean Ninja Kiwi are as brilliant as Shigeru Miyamoto, just that they're working in the same sphere of creativity.

Thank you for letting me smash a piano in this game. Enough said.