Run From The Sun 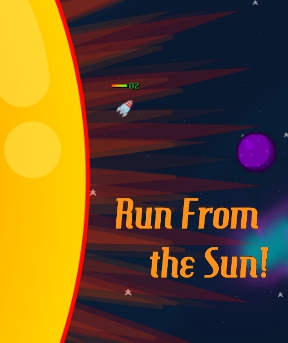 Don't you just hate when you wake up and find out that the sun is exploding? Yeah, me too. What with the shock waves of the supernova and the imminent threat of incineration, it just about ruins your whole day. Then you have to pack up everything into the family rocket ship and blast to each world in your solar system, and because of the ever-approaching wall of flame, there's no time for sight-seeing. All you can do is try to stay one step ahead of the heat-death. Such is the premise of Run from the Sun, by FreakyZoid. And considering the title, it's kind of ironic that it's something you'll want to run towards as quickly as possible.

Run from the Sun is a horizontal-scrolling "race the screen" arcade game with simple mechanics and an engaging aesthetic. You rocket starts on a rotating Earth, and your ship launches with a click of the mouse or a press of the [spacebar]. You blast from planet to planet, keeping ahead of the explosions behind you, always making sure to land before your oxygen runs out. Extra points are scored by aiming for farther planets, using gravity to sling you towards a safe landing, collecting stars, narrowly missing meteors and spotting UFOs. Earning achievements unlocks ships with new abilities. And remember: as you walk away from the sun, try not to come slowly undone.

Run from the Sun is a bit reminiscent of earlier releases like Escape the Red Giant, but its art deco graphics and emphasis on timing makes it unique. Gameplay is fun, if a little repetitive, and inspires that certain "one-more-round" kind of addiction. I will say that the physics require some getting used to. The size of a planet doesn't really seem to give any indication of its gravity, making it hard to plan "gravitational sling-shots", as well as know how close you must get until you can land. Also, I wish that there had been some sort of "self-destruct" option: when a mis-aimed shot sends you careening out in to the black, it really breaks the flow to have to wait until your oxygen runs out. That said, despite its flaws, the game is quite enjoyable and should satisfy anyone looking for a bit of mindless arcadey fun. And since tomorrow may rain... go Run from the Sun!

Play Run from the Sun

I second the motion for a self-destruct function. A near-miss shot can travel so far by the time you run out of oxygen and get recalled that the planet you started on has been destroyed and it's game over.

More fun than I thought it would be, my best launch was 131,350. It seems that if you had the patience you could go a lot further.

This kept me engaged longer than your typical escape the screen game. I really liked it. One thing that was weird to me was the fact that you got 250 points for a successful land but only 100 points for a planet hop... so it's better to not skip anything for max score!

Nice little game that! "Breathtaking Flying" acheivement is broken though.

I found this fun as well. I would have liked to see a sort of 'story mode' to it, with a proper ending. I also found slingshots entirely random, though if anyone is gunning for the achievement (to unlock a ship) you tend to get more slingshots with the red ship that has a higher blastoff velocity.

I also suspect the Breathtaking Flying achievement is broken, even though the developer says it's not and you just need to land with <5% oxygen left.

I think it's quite possible the "Breathtaking Flying" achievement isn't broken, in a technical sense-- I have a 1/10 score in that regard. Then again, this is after at least two hours of play, having long ago maxed out every other achievement. So, maybe it's not broken, but that 5% figure is ridiculously low, that's all. I'm sure if y'all are willing to put in another 20 hours or so of gameplay, you can finally win the achievement.

I've been playing this game at school when all my assignments are done :P

Also in response to what MisterThou said - that's not how it worked when I played it. I've done several planet hops to check this. I get 250 points when landing, plus a 100 point bonus when is assessed when I leave the planet.

Sorry, I meant to say that the Space Marine is supposed to have a SMALLER tank.