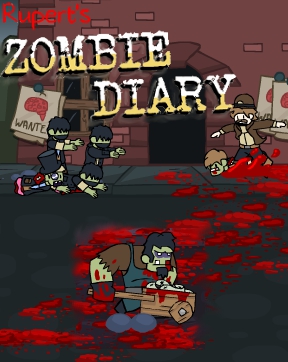 The zombie apocalypse is bloody and terrifying... but also oddly hysterical if you slap a dapper English gentleman in a bowler hat as the lead. Scimitar Games' Rupert's Zombie Diary, an action-packed shooter, is full of all the squishy gore, crazy zombies, and slapstick bloody comedy you could wish for. When a necromancer raises the dead with the intention of taking over London, Rupert will stop at nothing in his quest to clean the city out and make it home safely single-handedly. Each day he visits a different part of the city, trying to clear it completely of zombies and earn enough money to fortify it against new invasion. Easier said than done since the zombies have reinforcements and necromancy and you have... an amusing ability to surf around on bloody corpses. Which is, uh... something you might want to avoid putting on your résumé actually.

Use the [WASD] keys to move around, and the mouse to aim and shoot. [ESC] pauses the game if you need to take a breather from all the red and the chomping and the bullets and the wahey. Each stage has a certain number of zombies to take out and a time limit; kill all the zombies and you'll get a big cash bonus you can either spend on upgrades and skills, or stockpile to eventually keep the area fresh and zombie clean permanently. If you die or the time runs out before your carnage is complete, you'll take a penalty to the cash you would've earned, but you can always just try again. While Rupert and his Zombie Diary are more than a little dependent on grinding, the quirky sense of humour and cartoonish presentation help to make this one stand out from a sea of other games with near identical gameplay. It sort of feels like a goofier, more limited version of the Mercenaries minigame in Resident Evil, and if you're simply looking for a spot of bloody good fun to fill some time, Rupert might just be your man.

The costs of things scale, but your ability to earn income does not. trying to earn enough cash to barricade something is just a matter of doing the same thing over and over. The upgrades are lackluster, the monetary bonuses are a joke, and the gameplay ends up being highly repetitive.

How on earth does one replenish rifle ammo besides crates? Is it really supposed to be so vanishingly rare for something of such modest utility?

Finaly after at least an hour beat the last boss, and now im just standing on the boss-fight screen all on my own. Is that it, no end cutscene? not even a well done note? Bah!

How the heck are you supposed to dodge the boss? I can only do it by getting lucky. And I am NOT a lucky individual. Good fortune avoids me like a leper colony.

It appears there's a bug which lets you purchase any upgrade, whenever.

Clarification: As long as you have the funds. I just (unintentionally) clicked on the Surfing Pro ability, despite that I haven't purchased any other powers in that 'tree'

killed the main boss. an ending would be nice.