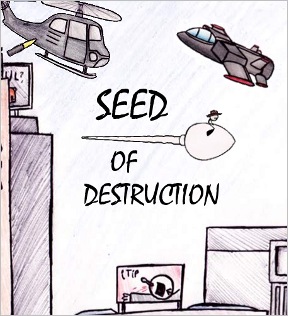 Gentlemen. Ladies. I suppose you're wondering why I've called you here today to this secret underground bunker lit only by a single dramatic light bulb. The simple fact is there's nobody else I can trust with this. Nobody else can do what you do. Even now the threat is looming closer, the giant shadow of doom hovering over our fair city. The army is defenseless. The airforce? Useless! No, what we need is a man of your skill. Unless you happen to be a lady, which is also fine. We need you, my friend, to combat… THIS GIANT SPERMATOZOA.

AWWWW, no! C'mon, come baaaaaaaaaack! Darn it, why does nobody take me seriously?

Okay, so at first glance, Seed of Destruction, the newest title from Florian Himsl (Komix) of Twin Hobo Rocket and Coil infamy, may not seem like it's for everyone. Playing the role of a gleeful fellow perched atop a gargantuan sperm, you zip through the city at breakneck speeds, squashing people beneath your impressive girth and deflecting missiles back at their shooters. But I'm sure there's a very good reason for it! A very deep, meaningful, thought provoking… uh… what is he doing to that grenade?

Using the [arrow] keys, you control the Seed and send it hurtling through the streets of terrified passersby and grim-faced military. Pressing the [up] arrow accelerates, while [down] decelerates, and you use [left] and [right] to rotate accordingly. Pressing and holding [space] can help you build up speed, indicated by the blue bar, that when released causes you to burst forward and ram enemies, but your primary means of defense is your tail. If a missile or other projectile is headed your way, you can twist around with the [arrow] keys and deflect it aside, instantly destroying whatever it collides with. Or if you like, you can also simply bludgeon things with your enormous torso. The Seed is very accommodating to your needs! 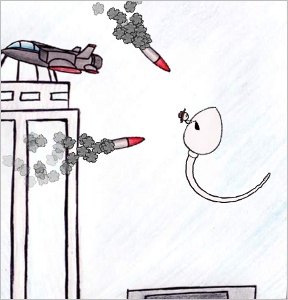 While the game starts off slowly, with you indulging in a bit of harmless pedestrian squelching, things quickly get serious as the army shows up to put a stop to your antics. If you think the worst you'll have to deal with is a grenade or two, think again when the bomber jets start dropping out of the sky. It's going to take some fancy flying to keep them from ruining your fun — which is to say, blowing you to smithereens — but if you've got the skills, the Seed has the means.

Seed of Destruction is hand-drawn by artist Grey Gerling with pencil crayons, and it's a technique that works here. Sporting cute and snarky animated cut-scenes between levels, the simple art holds up well during gameplay. It's more ribald than vulgar, and I spent most of my time with a half amused, half confused smile on my face. The music by Sulek is a toe-tappin', finger-snappin' guitar romp that makes you feel like you should be rocketing over a conveniently placed dirt ramp right beside the Duke boys, so don't be afraid to saddle up. (Daisy Dukes are optional, but encouraged.)

Analysis: Despite the cheeky subject matter, Seed of Destruction is so outlandish, so silly, so cheerfully bawdy that you can't help but like it. It's like a cuddly Saint Bernard that trashes your living room and then wants its belly rubbed. The expression of delight on your little rider's face, the way you can juggle grenades in mid-air, and the somehow just right guitar soundtrack combine to completely overrule any initial squeamishness I might possibly have had. The presentation is just so gloriously over the top.

Initially, I found controlling the mighty steed a little unwieldy. It's not exactly built for hairpin turns, and I spent a lot of time having missiles explode on me because I didn't allow enough time for me to actually spin my tail all the way around. Since explosions send you flying, I also spent a lot of time getting tossed about the screen like a pinball against a set of bumpers. Sure I was handling it like a pro before long, but I'm still impressed the little guy was able to keep hold of his cowboy hat.

At five levels, Seed of Destruction feels a little short, even with the four added mini-games. Pausing the game at any time by pressing [p] brings up a menu that allows you to adjust the difficulty, but even with it set to hard you can still expect to breeze through the game in a single sitting. Does that mean you should pass it up? No and no sir. Not only is Seed of Destruction one of the weirdest experiences you'll have in a game, it's a lot of fun to boot. Is it life-affirming? Is it poignant? Maybe! I guess it just goes to show that with a song in your heart and a giant sperm at your side, there's no end to what you can accomplish. The more you know.

I love the comic concept in graphics and instruction.

The controlling takes a little to time to get used to, but when you do, you realize how smooth the game actually is.

One thing I found is that you can hold left or right to spin and almost all missiles will be deflected. At least from the default difficulty.

Anyone ever read Grant Morrison's "The Filth?"

Heh, reminds me of that Futurama episode where they're inside someones body, and Zoidberg comes back riding a sperm saying "Guess where I just went!"

That was a very enjoyable game. Even the cut scenes were fun to watch. I had to laugh when the tanks first show up and he tries to bash into it, with no avail. He then sports a concerned look until a missile blows the tank up and the smile once again returns to his face. :D

There's such a feel of accomplishment when you successfully outmaneuver a missile, deflect it, and send it straight into a jet.

It was just so quirky and adorable, I had a lot of fun with it. It's short but it's not too short, hitting a right amount where it doesn't outlast its stay but it doesn't feel incomplete.

I thought it was going to be either a "wacky art style" gimmick game or a "wacky subject matter" gimmick game, but it turns out it plays great and is really fun! The controls and the movement of the tail are intuitive and the game is satisfying.

I think the length of the game is perfect.

Does anyone know what the level-up requirements are? Aside from the "Kill 5 Civilians" on the first level, I don't think I ever saw an indication of what they were (and it doesn't look like the kill 5 civilians holds on later levels - I don't think I even saw a civilian on the tank level).

RM: I'm pretty sure it's just # of points to pass a level. I think the first level has a point target of 500, which happens to be exactly 5 civilians.

The requirements are (I believe):

Yep, Anesto, you're right. I didn't figure out (or care about) the exact point values, but I guessed it was the point values, not what you killed that mattered.

Fun game, intuitive controls (though sometimes difficult to deflect some of the projectiles if you just spin - makes sense, I guess, so you can't just sit still). Fun minigames; seeing the grenade juggling one made me happy, though I did more grenade juggling while playing than I did in the minigame (I just kept accidentally knocking them straight back down with the bottom of my tail). Good stuff. :)

I love this game. It's even better than Twin Hobo Rocket---if I remember correctly, it's very like this game control-wise. (Coil, which I also love, is an entirely different type of game, so it's in a class by itself among Komix's creations thus far.)

Finally beat the last level . . . between the tanks and the zeppelins, I was having a hard time of it. I need to work on my projectile-deflecting skills. Heigh-ho, Spermy! Awaaaay!

The animations are so fun to watch! The game feels very smooth too. My first 5 stars :D

I somewhat enjoyed the animation that occurs when you lose. The tears in his eyes and the caption of "You ruined everything!" actually made me feel bad for killing the poor guy.

Awesome, if somewhat disturbing, game. I really liked how the minigames made me a better player by making me learn different techniques really well.

I found the 5th level really easy to beat by

either running away and the zeppelin destroying itself offscreen, or getting right next to it before it opened and just spinning it away from me!

The points added up really fast. Though part of me just thinks I got lucky hehe

This game rocks! I find level 4 the hardest. Somehow reflection timings are just perfect. I rate it 5 stars.