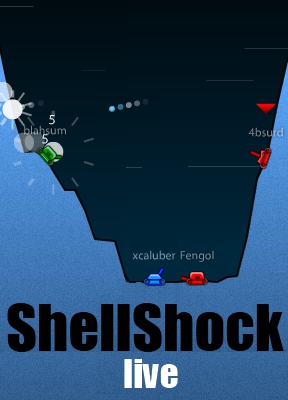 What happens when you take a few players, give them all over-the-top weapons and drop the lot on a 2D landscape that can be blown to bits? Total mayhem, obviously. If the formula rings a bell, it's most likely because you are thinking of Worms, the artillery genre's poster invertebrate. Bonus points if you conjured the memory of Scorched Earth, godfather of dropping cluster bombs on some hapless nitwit on the other side of a hill. There have been many imitators to that classic, but none have ever come as close as the multiplayer bomb-fest Shell Shock Live, the strategic action arcade game from Kyle Champ.

The game controls much like Worms did: you are represented by a tank, which can be moved forwards and backwards on the landscape (limited each turn by fuel, which depletes as you move). You aim and fire with the mouse: point the aiming cone at the best angle, then determine the power of your shot by pulling the cone towards or away from the tank. Once set, hit the [spacebar] and watch your shot curve beautifully over obstacles and right on top of the enemy... but most likely witness how your misjudgement of wind, power and accuracy lands a whopper of explosives in the middle of nowhere (or the ultimate insult; it leaves the play area, never to be seen again).

There is a nice selection of exotic weapons to fire, many which hail from the Scorched Earth stable. Multi-shots, splitting rockets, bouncing bullets, airdrops and more are all present, while additional bang can be unlocked through gaining experience or via weapons packs for sale in the game store. The setup is simple: there are two teams, players split evenly in groups of 1, 2 or 3. Nobody can be killed; instead the goal is to do as much damage as possible to the other players. At the end of a certain number of rounds the scores are tallied and the winners announced. Everyone gets experience, while winning adds bonuses. Experience gathers slowly, but each step up unlocks new weapons, features or maps. The weapons for each round are assigned randomly, pulling out of the pool you have available.

Getting in to play is as simple as owning a browser and email address. To gather experience, you need to register an account (requiring a working email address), though guest accounts let you test-drive Shell Shock Live. A neat in-game chat system lets you send messages to players and you can maintain friends lists, as well as host invite-only games. 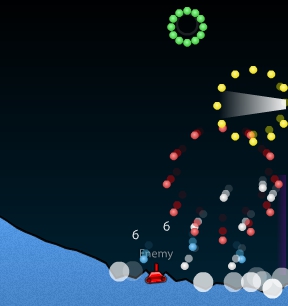 Analysis: Shell Shock Live is fun. Lots of fun. Firstly, it is easy to play and anybody will be comfortable after a round or two. But that doesn't mean they will be good at it - becoming a master at this type of game takes time and patience. The makers of Shell Shock Live know as much, which is why the game neatly exploits a micro-transaction system that gives you a leg up on gaining experience (if you sign up for an elite account), delivers more powerful weapons in the assortment of packs, and offers cosmetic changes in new maps, themes and tank packs.

While the words "micro transaction" or "registration" will send most players running, both are implemented painlessly. You can play as a guest and certainly won't find yourself at a massive disadvantage when only employing the free armory. Even when playing for free you can reach a very high level and access some pretty devastating weapons. Above all, though, it's about accuracy; something no amount of money can buy. The weapon packs generally just add more variety, but some of the whoppers have rightfully been reserved for paying customers.

Since it is all a team-based title, the lobby is easy to figure out. Joining a game is simple and getting friends together for a few rounds is a matter of sharing a generated code. When a player leaves a game, others in his team can control his tank (though this still leaves that team at a distinct disadvantage) and the in-game chat system is eloquent, simple, intuitive and (a plus for parents) has an optional profanity filter.

There have been some performance issues over the weekend, but this appears to have been remedied with more game servers. With battles constantly appearing, it is possible to jump in for a quick ten-minute game or spend a whole afternoon shooting projectiles at each other. Gather a few friends, run Skype in the background and you can have a regular LAN-style party for the night.

When im trying to sign up i cant type @. please help!

So this is turn based zwok. lets see.

Bonus bonus points for remembering Tank Wars, which I'm fairly sure is pre-Scorched Earth. And part of the ruination of my college career :)

Well, It could have been fun. But the author should put some kind of ip/multiple account check. First match played and two of my team mates were controlled by one in the other team. Fun when it's 3v3. Nah not really.

I was wondering the other day why no-one had re-made Scorched Earth. Perfect for browser LAN gaming! but do they still have the rubber walls? or electro-mag defense system!? (or the 80's noises that go with it!) yes many MANY hours of my youth playing this game! Although i'm kinda dissapointed you can't die, since those dieing last words were half the fun. Remember the Alamo!

I must be dense. I can't figure out the friends thing.

I added friends to my list but can't figure out how to play with them or invite them into a game.

If click "create" and then "launch" to start a game, theres a code you can copy but how the heck do you get it to a friend? You're already in the game waiting to play at that point. You can't leave.

Also, if you see a friend is playing a game, you can't just click on it and maybe wait or be notified when the game is over and a spot opens up.

I must be missing something or this whole thing isn't very intuitive.

Real-life $ availability giving an in-game advantage? No thanks. I'd change my vote to 3/5 if I could.