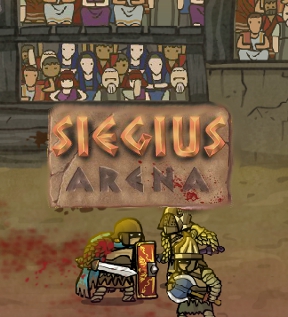 Who needs primal scream therapy when you have Sky 9 Games' over-the-top hack-and-slash action-fest Siegius Arena? As a centurion betrayed by one of his own men, you've been sentenced to death in the arena, but that's nothing a little determination and some decapitations won't fix. Use the [WASD] or [arrow] keys to move, and the [Z] and [X] keys while in battle to attack, using any items you pick up with [C] or [V]. As you stab your way through your foes, the crowd's excitement rises, and when the bar to the right side of the screen fills, hitting [spacebar] will unleash your ultimate attack... though nobody likes a punching bag, so getting hit yourself will cause the bar's level to drop. Loot coins from corpses during matches to spend on better equipment between rounds. You can even buy some spells to give yourself an edge, because let's face it, man's best friend is his unholy storm of flames. You can even replay matches to grind gold!

Siegius Arena is one of those great looking, simple little games that's both satisfying and a little frustrating to play. The action is easy to master and strangely entertaining to watch as cute cartoon limbs go flying across the screen, and the variety of items to purchase influence your stats and strengths in ways that feel like they give the game just enough depth. On the other hand, the movement like turning and controls just aren't fast and fluid enough to make combat as smooth as it needs to be, and it doesn't feel like your enemies are that smart, since most can be defeated easily by stun-locking them with that most hallowed of ancient techniques... button mashing. The end result is a game that doesn't quite get above "addictive coffee break status", but still manages to be a head-crushing good time with tons of upgrades to buy and foes to slash, earning you endless adoration in the process. Turns out the quickest way to a crowd's heart is through someone else's sternum.

I'm really not a fan of the controls allowing for fat finger mistakes costing you whatever item you have a finite supply of. I also don't like that changing direction involves stopping movement to do, when I'm fighting in one direction and it propels me forward to do so, I expose my back, I should be able to turn around more easily and quickly.

Another thing, I have to leave the arena, walk to another screen, then walk to the other 3 screens to get upgrades, then switch to mouse control to do so. Lame. Oh yeah, same steps required to switch up what items you equip yourself with.

Mindless button masher, no real strategy. I agreed with previous comments, using mouse and keyboard is distracting. You end up with too much cash quickly and the upgrades stay locked for too long. Good visuals, but that's about it.

The difficulty ramps up too quickly, in my opinion. Also, while it's an RPG, you have to win rounds in order to unlock stuff, which tends to be a problem if you can't beat those rounds. For example, I've got the best gear of what's been unlocked so far, yet I'm very much having difficulty in beating the round to get to the next set of equipment to unlock, which doesn't do me any good.