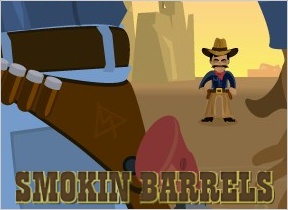 Shine up your six-shooters, 'cause it's time for a good old-fashioned gunfight! From the Gamesheep Team (creators of Mindfields) comes Smokin' Barrels, a wild west showdown where it's shoot or be shot! With every new challenger, you take your health meter into your own trigger-happy hands! Will your name be rendered synonymous with "quickest draw in the west"? Or will you be forced to replenish your health through liberal application of whiskey?

The gameplay mirrors the harrowing simplicity of a wild west duel. First, holster your gun by moving your pointer into the "safe zone" at your feet. When the referee says "Draw!", move quickly to the target that appears and click to shoot. Whoever hits the target first deals damage to the other player based on accuracy and weapon strength. As long as both players still have hit points, the duel continues.

Of course, this would get old very quickly without some sort of variation. As you progress through the ranks of gunslinging opponents, they become faster and more accurate. Luckily there is a store with many fine items for purchase to help you keep pace. Upgrade to a better gun for more power and speed! Buy exploding bullets for maximum damage! Don a leather vest to minimize HP loss; and of course there are four items that grant access to the minigames! Yes, you can earn extra cash by betting on dice rolls, throwing knives, shooting targets, or racing horses, and unless you've got lightning reflexes these minigames will become absolutely necessary to maintain enough cash to keep entering duels. 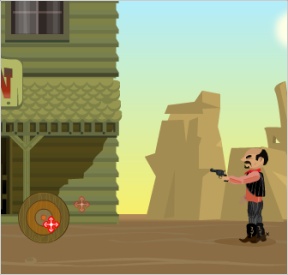 Analysis: If you've been around the site for a while, you may have noticed that I tend to gravitate toward puzzlers, platformers and strategic games, while avoiding games that are heavy on coordination and reflexes. This begs the question: what on earth is it about Smokin' Barrels that prompted this review? First off, it does a great job of capturing the dramatic tension of a duel through its simple but effective main game mechanic. More importantly, though, it offers plenty of added value with the numerous upgrades and minigames. The designers did a good job of balancing the costs and revenues so that you have to keep a close eye on your cash flow, lest you be caught with zero health and no money for medicine.

To top it all off, Smokin' Barrels finds a happy medium between "leisurely Segway ride through the park" and "fiery gauntlet of doom". It's challenging, but not inaccessibly so. Of course, given my general lack of skills in the manual dexterity department, this statement may not apply if you were born with a joystick in your hand. Still, losing a duel will generally have you scurrying back to the minigames to earn enough cash to take another shot, the words "I can beat this guy, I know it" madly galloping through your skull.

The one glaring weakness in Smokin' Barrels are the minigames themselves. While nobody expects brilliant new gameplay concepts in a minigame, there's nothing in any of the four that hasn't been done many times before. The rewards for playing are slightly undervalued, so that you usually end up playing the minigames more than the dueling, which is the part that's the most fun. Also, for three of the four minigames, there's virtually nothing to keep you from playing as often as you want once you've bought access, which removes a lot of the risk that's built into the game's economic system.

Personally, I think a better design would have been to have the minigames give a better return per play, but limit the number of plays before you have to rebuy your minigame access. Then again, me sucking less at dueling might get rid of this problem altogether!

Despite its occasional flaws, Smokin' Barrels succeeds in wrapping the tension of a high noon six-shooter showdown in an intricate poncho of minigames and economics for a totally enjoyable casual experience.

the guns are restricted by your rank but they don't tell you that until you've saved up to buy it, and then it doesn't say what rank you need.

annoying enough for me close the game.

My cursor lags when playing this game. The crosshair moves incredibly slowly- moving as fast as I can on level one, the opponent's auto-aim moves three times as fast as mine. And I'm a FPS player, so it's not like I'm slow.

Leeksoup. That's intentional. The lag in the cursor is supposed to be representative of the gun type you have. The better the gun, the less lag.

There's only 5 ranks and 5 guns. Therefore there's a gun for each rank. To gain a rank you need to beat one opponent from the next tier.

I myself still have yet to beat the game because:

The Zombi Priest is impossible to beat, even with all of the best equipment (Daquan, Explosive Steel Bullets, Hard Leather Jacket, and Lucky Clover).

I'm sure I played an incredibly similar game over a year ago...just slightly different graphics. Is this that game refurbished?

I literally just lost this. I only have 1$, beaten everyone on Level 1 and 2, and only have Level 3 gun and Best bullets.

You made the same mistake I did first setting out. Because you can afford the best bullets out the gate, you buy them. Don't! The reason being because you can get free bullets, and if you buy the upper class, if you lose just once (a very likely occurence), you won't be left with enough money to get back in the game.

The solution to this is to buy the dice as soon as you can.

I beat it! Without the minigames. I recommend buying the most expensive equipment you can afford because the better the gun and bullets you have, the more damage you do. The minigames are boring and don't give you much money. If I were having trouble winning duels, I would just save and restart instead of going the minigame route.

I just find this game really really hard, maybe I just have poor reflexes. The only way I can make any progress is to keep save/loading.

SmileyRiley, that game was most likely Auntie Pixelante's excellent Calamity Annie; it uses a similar draw-your-gun mechanic but also does some interesting things with narrative persistence across different gameplays. (You'll have to play more than once to see this in action, of course, but the game has an arcade-like structure, so your first time you'll probably hit a gameover screen relatively quickly.)

I've played this long time ago too (same game exactomundo). Maby was some other site.

Decent game. One thing about the minigames: get the rifle first. Once you have it, it doesn't cost to play it, and you build cash by just shooting targets for 2mins. This helps if you need health and an entry fee.

I also saved before a match, and if lost or took too much damage, I just reloaded. I don't care about building points anyways.

Pretty addictive little game for a while. A few problems, though: The mini games get to be a chore really quick, and even a little bit of lag can make the main dueling game really aggravating. All this would be ok overall, except that I couldn't get the save function to work properly. It saved once very early on, then refused to save over this early save. As a result I reached the zombie priest, but after saving and leaving I returned to find myself pretty much at the beginning. I tried a few more times with the same result. This is incredibly frustrating. Anyone else have similar problems?

I am also dead sure that i played this game about a year ago - it even had the same bug which allows you to easily win every duel. :-)

But it's still a nice game for the weekend!

You said there is a bug that makes duels easy.

What is it. I am having troubles beating the last dual so any help would be nice.

Like in almost every flash game, the tab key is the magic key to cheat. Keep your mouse in the middle, hit tab, to focus the safe area, do not move your mouse until the target appears. now you can start from the screen middle.

How do you kill the Zombie Priest? I'm stuck on that level, and I don't want to waste my last 1000 dollars.

I killed the zombie priest but he just comes back to life. So you can't actually win the game for good.