If you're wanting a good time by stealing rubies and stabbing people in the back, and Styx: Master of Shadows is just not family friendly enough for you, then Sneaky Sneaky, by Naiad Entertainment, is the indie stealth game for you. Just look at his darling little face. If it wasn't for his red bandit mask you would have never guessed he just stole a large bag full of rubies from the Sultan. Sadly, as he had just made his escape some rude thugs stopped him short. No class, those thugs. To top it all off, a pesky bird carried away your bag full of all the Sultan's royal jewels. With the help of your partner Squeaky, a lovely rat, it's time to do what you do best... sneak, steal, and strike, namely when the backs are turned. Work your way through the fifteen levels of strategically planning your next move as you work to gather your dropped items and reclaim what wasn't really yours in the first place. 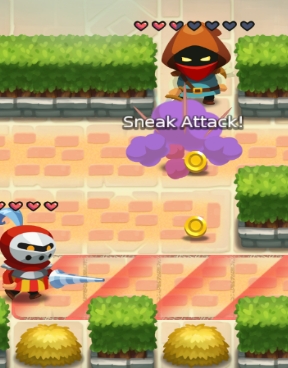 Sneaky Sneaky has the basic stealth game mechanics... hide in the bushes, try not to be seen and cut the throat of anyone who does see you. Click on the square you want to go to and your charming little thief will head there, usually by the fastest way possible. Your enemies also move around, and if you step into their range of awareness as marked by red squares, you'll be spotted. As soon as you're detected, you no longer can move until the enemy is done with his three actions, which usually consist of making his way over to you, and then attempted to hew you down as quickly as possible. If you survive, you get three moves of your own and you can attack back or you can attempt to run. If you're out of their area of sight you can try to run again, and try to pop into foliage to hide. As the game progress however, and you pick up some needed items, you can use your turn during battle to do a lot more, like shoot an arrow into an explosive pot to end the battle quickly. The world is your cigar as long as you can come up with a plan and aim well. 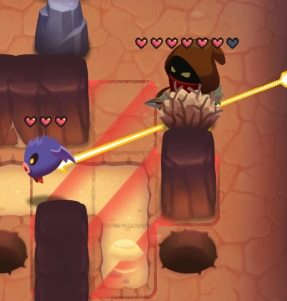 Most of the rooms you enter can be looked at as a puzzle to solve. Finding the right place to be at the right time is a key strategy. Besides battles, everything else is not turn-based, so while you move your foes move as well. They usually keep to a rhythm, moving on beat. A worn down path around them means they have a set patrol, but if not they are free to roam wherever they wish, one or two squares at a time. Thankfully, like most sneak games, most of the baddies are near-sided and some lack all uses of peripheral vision. They are all also a bit dim witted, so they won't notice if a comrade has suddenly vanished in a puff of smoke with a cry of anguish, nor will they question the greening meat that has been left on the ground for them, by you of course. As soon as the meat enters their area of awareness, they rush to it and focus only on it, letting you head over and end their hunger, permanently. If you hurry and get to them before they can take a bite, you can actually pick up the meat to use again on their fellow ally. It pays to be frugal, seeing as your partner Squeaky doesn't believe in a family and friend discount at his store, where you can pick up health potions, a larger quiver, and other assortments you're going to need in your quest.

Naiad Entertainment has made a beautiful game with enchanting music that somehow makes robbing and shanking people in the kidneys still feel light and fun. Each level's feel is more stimulating than the last and each near area comes with new enemies and environmental hazards and helps that keep you on your toes. It keeps its odd mixture of light and dark humor through the whole game. The only problem I see is the bit of a struggle you have with your thief when you've clicked somewhere on the map and then want to change your mind. Clicking elsewhere on the ground works most of the time, but not always. This game is built more about strategy than just being a dungeon crawl so perhaps this was the developer's way of saying "Pay attention to every move." You know, be organized, in your stealing and dealings. 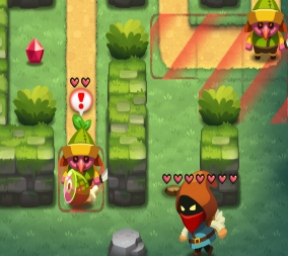 Alas, there is also one more complaint I have, that seems to be the issue with most games coming out recently. Sneaky Sneaky is only 15 levels long, so once you really feel that you've sunk your teeth into it, you find that there isn't anything left to bite into. Now don't get me wrong, the levels themselves can be a bit long, with more than one goal to be accomplished. But Sneaky Sneaky is just one of those games that is so well done that you hate to see it cut so short. The story wraps up nicely so the only loss you feel is to the gameplay itself. Still, it is better to wade into the cool stream of entertainment than to stay baking on the shores of boredom. And this is a stream you're going to want to find any reason to stay in longer. Thank goodness for achievements.

There is no 6th item ? it sounds like this game was quickly done, the level design is very poor, items could make interesting puzzles but none are needed.