Venturing to the ocean floor has always been an intriguing thought. Tales of unusual creatures and buried treasure abound. Dive right in with Solitaire Blitz, a fast paced addictive card game from PopCap. It's not just solitaire on your iOS device, it's a race against the clock. 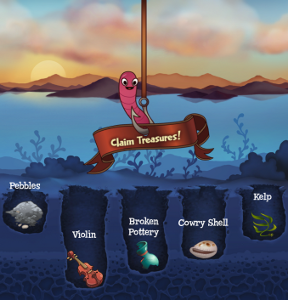 It's your job to empty the card stacks at the bottom of the screen within the time limit, which begins at 60 seconds. Cards are placed in numerical order, up or down, with aces high or low. Suit doesn't matter, just tap the card you'd like to play and swipe left or right to draw from the deck. If there is more than one place a card can go, the game automatically chooses the left-most spot. Watch for cards with keys on them to unlock more piles to give yourself more possible moves. As your stacks start to decline, you'll see time lines appear. Get all your stacks below the line, and twenty seconds will be added to the clock. And it's not just about the clock, either. You're also trying for a high score. You can compete against yourself for a personal best, or you can connect with your Facebook account and compete with your friends.

When you begin the game you start out with 25,000 silver and five lives. Silver is in-game currency used for purchasing boosts or additional lives. You use one life per game, and they slowly regenerate over time. Silver is earned each time you play as you discover treasures on the ocean floor. Treasures are valued anywhere from five silver up into the thousands if you are lucky enough to discover a rare one. Of course you can always spend real world cash to purchase more silver or lives, but with the high prices of the in-app purchases, you're probably better off earning as you play. 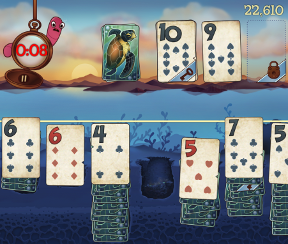 If you are trying for a high score, getting runs is the way to do it. For every ten cards in a row, a score multiplier is awarded. Boosts are a big help with this. In addition to adding time or cards to your deck (which also contribute to score at the end of a round), you can also have jokers or bombs that help you not break your streak. You are also awarded extra points for each game in a row you win, and another bonus if you don't attempt any illegal moves.

Analysis: Though obviously the game was designed for speed runs, it would be nice to have an option for a relaxed non-competitive game. The inclusion of lives, though great if you have a hard time limiting your play, seems like what it is: a cheap ploy to get you to spend money. An in-app purchase that would give you unlimited play would be a welcome addition.

PopCap games are known for their cute characters and charming atmosphere, and Solitaire Blitz is no exception. The worm's expression when you're about to run out of time is great, and you'll just want to cuddle up with all the creatures who are hiding under your cards. Except they'd be wet. Though I'm not usually one for social games, having weekly tournaments against your friends is a very compelling reason to play. It's fun to try for achievements, and the variety of deck art is impressive. Solitaire Blitz is another great addition to the PopCap lineup.

my game with solitaire blitz will not come up. It ws fine Wednesday. Is there anything I can do.

Hello Sarah! Sorry you're having problems. I'm not sure what you mean by it "not coming up". It sounds like you might need to contact the developer through the iTunes page with your device information and have them check it out.