The opening to Vanya Gorenkov's puzzle platforming game Soom opens with a scene that may make some people cringe, as the protagonist dives off a cliff into the ocean with the intent of ending it all. Instead of dying, however, he finds himself in a strange black and white realm, guided by a strange automaton to gather the shattered pieces of his soul, which is the same thing that happens to me everytime I watch any episode of Star Trek involving Data and his quest for humanity. Use the [arrows] or [WASD] keys to move and jump, nabbing all soul pieces to win the level. The catch? You can also click any white square and drag it to fold, pull, or push your environment around you to bridge gaps or otherwise get past dangers. Got that? Now throw in portals, lasers, switches, and enemies, and you have yourself a recipe for some extremely dangerous soul searching. If you make a mistake, just hit [Z] to undo your last environmental change. 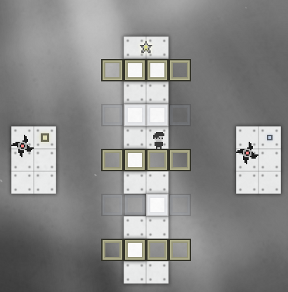 Soom's biggest drawback, apart from the perhaps intimidating number of gameplay elements piled on to keep track of, is the fact that it doesn't just hold your hand for the first ten stages... it leads you step by step, cooing gentle reassurances and compliments the whole way. It gives the false impression that the entire game is this way, instead of just explaining each new gameplay element and allowing you to figure out how to pass the level yourself. In the words of Stuart, I CAN DO IIIIIIIIIT. Trust me, once Soom takes off the gloves and stops babying you, things get significantly more difficult, testing both your reflexes and your brain. Initially, it feels like Soom would have been better as a straight-up puzzle game instead of adding in the more reflex-based platforming challenges, but more often than not a little experimentation will reveal that the solution is almost always more puzzle than platform.

As mentioned, that comes back to remembering exactly what your planes-trotting hero can do. Swap scenery, go through portals, move things, delete things... the list of mechanics and the ways to use them is significant, and often I found myself stuck solely because I'd forgotten I could, say, remove blocks of the scenery, or that portals mean you can go "outside the white" without dying. It's a lot of balls to keep up in the air, but if you can manage it, chances are you'll find Soom a neat little puzzle game well worth checking out apart from some dreamy, floaty jumping. It's a bit disappointing that after the initial setup Soom essentially drops all pretense of storytelling like a hot potatoe, and it seems like there was more potential to better marry narrative with gameplay for something truly memorable. But with a lot of ingenuity and an atmospheric presentation, Soom is still worth a play for fans of atmospheric reality-warping puzzlers.

Helpful tip: pressing the "P" key skips you to the next level, if you really get stuck.

Game gets very laggy when holding down a move key.

I encountered no lag whatsoever. :) Make sure you have everything in your browser updated and close all other tabs. If you keep getting lagging and your computer isn't old, consider submitting a bug report that could help the developer figure out what's wrong by including your browser and its version as well as your current Flash player.

The mechanics are neat, but this game also serves as an excellent tutorial in how not to write tutorials.

I think this is absolutely terrific.

I'm really thinking my way through the puzzles and I know they are never toooo far away from completion if I get stuck - I just have to think harder!!

Really really enjoying it and it has a very refreshing feel.