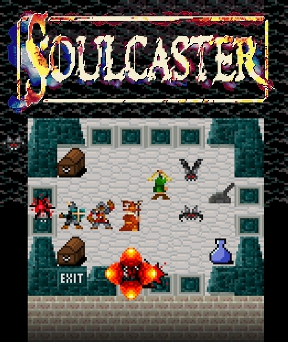 Originally released on the XBLA, Magical Time Bean's strategic tower-defense dungeon-crawling hybrid Soulcaster is now available to play for free in your browser, and touches on a very important issue we've all had to deal with... accidentally awakening the angry spirits of the dead while out for a stroll. But where you or I might just scream a lot and then die quickly with the most wounds, the red-robed wizard star is in luck, since he's able to summon the spirits of warriors to defend him as he goes deeper into the ruins he's discovered. Initially only the archer Shaedu will be at his disposal, but if he survives long enough he'll encounter a variety of heroic souls willing to be his meat shields on his quest.

The game takes place over a series of 20 stages and saves your progress between each. Click the mouse on the ground to walk to that space, or use the [arrow] keys to move. With the exception of single-use scrolls you can find if you're lucky, you can't actually attack the monsters that come after you yourself. Instead, you'll need to summon heroes as you acquire them to do the dirty work for you. Heroes are bound to a summon key ([Q], for instance), and will appear stationary where you're standing, attacking anything within range until they're destroyed or you recall them with [R]. The glowing orbs at the bottom of the screen represent your Soul Orbs, and you can summon as many different types of heroes as you have available Orbs, or use all of them to bring out multiple images of the same warrior. If you want to summon more, you'll need to shell out for pricey Soul Orbs, so be sure to keep some coins in the proverbial piggy bank.

Your heroes all have different abilities and weaknesses, so give some thought to the terrain when you place them, and don't be afraid to readjust on the fly, especially since certain monsters have immunities and weaknesses of their own. Make sure to nab any healing potions you'll find, and they'll be used on you automatically when your health gets low. As you progress, you'll find cash you can spend at the Merchant's shops to upgrade the warriors at your disposal, or purchase more scrolls and potions. Don't worry, you'll see the Merchant over and over again throughout the game... he's the second brother twice removed from the Merchant in Resident Evil 4 and thinks any fetid, dangerous dungeon is a great place for a store. I think that's the 33rd Rule of Acquisition anyway. 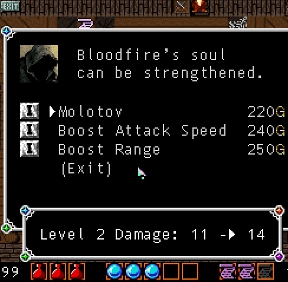 Though it takes some practice, Soulcaster is a great little game for fans of tower-defense who are looking for a title that brings something different to the genre. The free movement for both your character and the monsters is initially a little difficult to get used to, and being able to think strategically on the fly to place and move your defenders is a must for survival. You can expect to do a lot of squealing and running around initially as you get the hang of things, which almost makes me think that fantastic retro soundtrack should have an optional "Benny Hill mode" for those of us who are really bad at not getting chased by baddies. Fortunately, for such relatively simple gameplay, Soulcaster offers a surprising amount of strategic depth. The varying abilities and strengths of the heroes you summon means a little forethought and adaptability will allow you to absolutely decimate foes, so don't just throw your friends down willy-nilly. They work best when they play off of one another's weaknesses to present a united front.

With its surprising challenge and depth on top of a beautiful old-school style and immediately accessible gameplay, Soulcaster is an addictive indie gem. At the whopping new price of free it's a steal for anyone who loves tower-defense with a twist. If you enjoy it, consider purchasing both it and its sequel to support the developers, who released it free online as an experiment. Soulcaster is a perfect example of the remarkable ingenuity and fun people who don't play indie games are missing out on, and a great way to keep you wrapped up for quite some time.

A very promising start, then it crashed at the place you can talk to the spirits for more info. Here's the log dump if the devs happen to see this.

Ouch, sorry to hear you had problems, throwawayx3t! I played past that part with no problem. What browser were you using? Firefox worked fine for me.

I got the game to run fine, then boom! LAG, major LAG. It helps to know that you can use arrow keys to move rather than mouse, but I got stuck many times when the game freezes, and my charter then moves straight up like he was going and I try to turn and he keeps going up.....
Then I try to put a troop out and nope still moving. Then I get surrounded.

Also I know your suppose to have a lot of enemies at once on the screen, but its killer on the game play speed. I have a good laptop, but this game just sucks up to much processing.

I have the latest version of Firefox. Everything was fine and then it completely froze my browser at the Sacred Ruins. I won't be trying to play again.

Great, fun game. Worked for me other than the audio occasionally futzing up (including both the music disappearing for long sections of time, and the other sound cutting in and out occasionally, but only near the end). Really the cemetery is the only hard level, everything after that is a cakewalk compared to it. I was definitely expecting a boss to show up at the end, but instead, nope, ending!